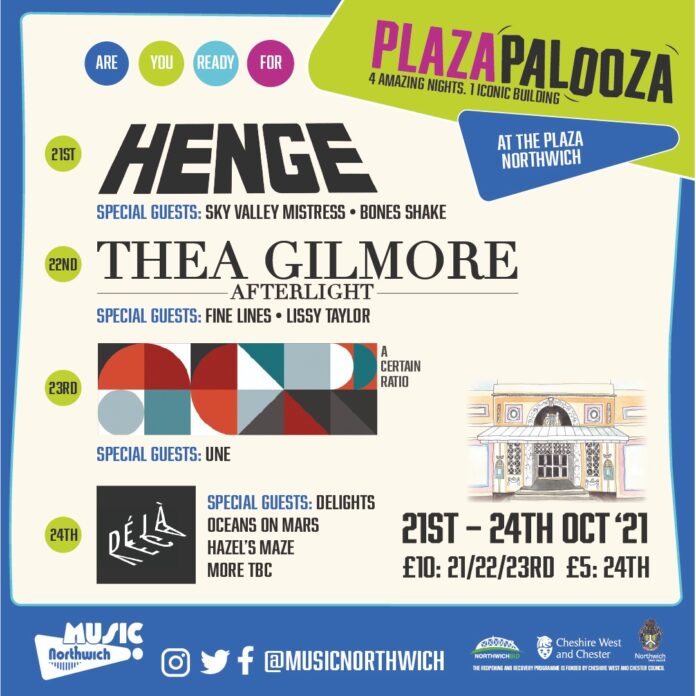 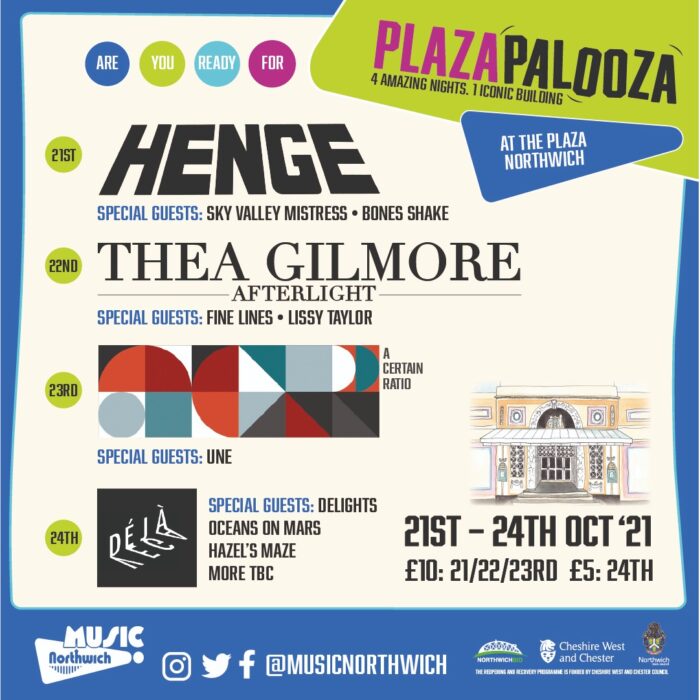 Northwich is back with PlazaPalooza introducing four quality nights of mixed music, featuring some highlights as above. Henge kick off the proceedings with their crazy space setup of cosmic nonsense, followed by folk songstress Thea Gilmore, Manchester legends A Certain Ratio and to end the weekend the brilliant Deja Vega who blew everyone away at John Hall’s celebration gig at The Ritz, Manchester with their incendiary set of high octane psychedelic post punk slammers. A band you have to witness live for the full fury of their power. Read on…

This October sees the launch of Music Northwich with four nights of top live acts taking to the stage at the iconic Plaza in Northwich under the guise of PlazaPalooza. The organisation has been set up to nurture the regions eclectic musical talent through a series of concert promotions that feature renowned acts alongside up-and-coming local bands and artists. The opening weekend sees psychedelic pop troupe Henge kick of proceedings on Thursday 21st October with support from Sky Valley Mistress and Bones Shake.

On Friday 22nd, folk songstress Thea Gilmore (also known as Afterlight) will headline alongside Fine Lines and Lissy Taylor. Saturday 23rd features a performance from Factory Records favourites A Certain Ratio with support from BBC 6 DJ Mark Radcliffe’s band UNE. Progressive indie rock trio Déjà Vega will be seeing the weekend out with a bang on Sunday 24th with local support to be announced.

Music Northwich is poised to celebrate the region’s strong heritage of local bands that have
included such hitmakers in the past as Tim Burgess (The Charlatans), Steve Hewitt (Placebo) and Rupert Holmes who penned the number one hit “Escape (The Pina Colada Song)”, as celebrated by the town’s recent Pina Colada festival. At its heart, Music Northwich is a collective of individuals working together as a grassroots movement to celebrate music made by Northwich artists, while helping to support local acts by
pairing music events with venues in town for a thriving live scene. Music Northwich is part of the Reopening and Recovery Programme funded by Cheshire West and Chester Council and support from Northwich BID and Northwich Town Council, that hopes to breathe life back into the arts and culture sector following a prolonged absence of live music during
Covid.

Councillor Louise Gittins, Leader of Cheshire West and Chester Council said: “Northwich will be the place to be in October, it’s fantastic to welcome back live music and providing a showcase for local musicians alongside the well-established ones. I’m sure this is going to be added to the list of memorable events on the Northwich calendar.” One of the Music Northwich founders Graham Lister, Arts and Cultural advisor to Cheshire West and Chester council, said of the event: “PlazaPalooza pulls together a carefully curated selection of
bands that are all well known for their breathtaking live performances in a fantastic venue. Each night has its own unique flavour and you’d be hard pressed to find an act that you didn’t enjoy. We are enormously proud of putting on a weekend of live music to remember and hope to see these events become a mainstay of Northwich’s illustrious local music scene”.