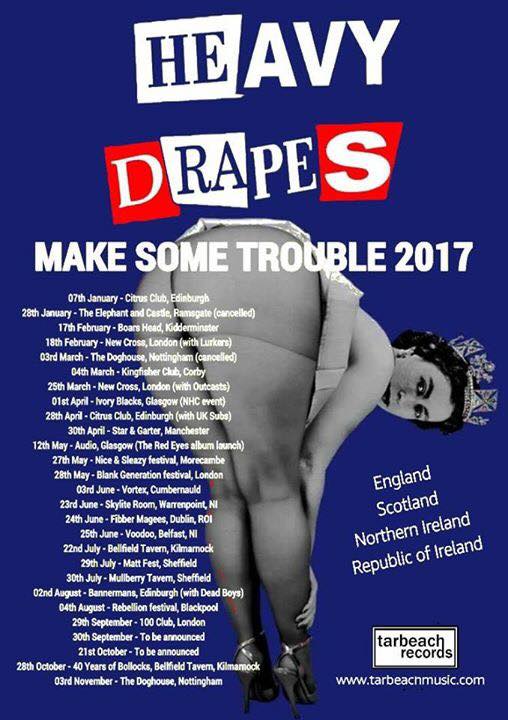 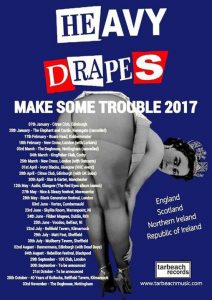 The hottest punk rock band in the U.K. have had a change of personnel and it’s a bit of a coup. Joe Whyte reports.

I’ve been raving about Heavy Drapes for over a year now. If you’ve not been aware of them in the punk scene you must have been marooned on a desert island this last twelve months. They are, without doubt, the hottest property in punk rock in Britain at the moment. Incessant touring, a massive online profile and the piece de resistance, a show-stopping performance in front of 2000 people on the main stage at Rebellion Festival have seen Heavy Drapes shift up yet another gear in their inexorable rise and rise.

This is a bit of a scoop; Louder Than War have the privilege of being first to break the news of a new addition to this very dysfunctional happy family. Original bassist Jerry has now left the band after a couple of years. This sort of thing would derail lesser bands. Not Heavy Drapes. They’ve only gone and added Paul Research, guitarist from 80’s nearly-famous post-punkers Scars. The move to bass is at his own request, apparently.

Dee Liberate, front-man and motor-mouth of Heavy Drapes had this to say about the change. (NB, all words are the singers own!)

” Jerry left as he wasn’t pretty enough. He’s a phenomenal bassist but he couldn’t cope with the pace the band were moving at. The first time I noticed there was an issue was after a London show when we were mobbed and he flapped at it. It seems to be all too much for him; it’s 24/7 job being in Heavy Drapes and he couldn’t cope with that. As regards Paul Research, I wanted him in the band as he’ll make us 25% more handsome and rather than have him him on my bedroom wall, I’ll have him in my band, thank you very much.”

“Scars were the coolest Edinburgh band, which is in itself quite an achievement. To secure Paul is completely unexpected. Paul made this happen himself. His art school pals will be horrified that he’s hooked up with Sham boot boys……”

Scars (not “The” Scars”) were conceived very early on in Edinburgh’s punk scene. Paul Research and Rab King were well-known punk faces from the very earliest days. The band quickly evolved from a typical in-yer-face punk mob into a thoughtful, literary, stark and very innovative band. Their debut single on Bob Last’s Fast Product (Adult/ery/Horrorshow) has been described as Scotland’s “Anarchy In The U.K.” and while I wouldn’t go that far, it certainly took punk rock in the capital into a very different if similarly threatening direction. Scars released one album, the major label “Author! Author”” before dissolving in acrimony and bad advice. There was one brief flirtation with a reformation a few years back but it seems old tensions quickly resurfaced. Incidentally, that album is due to be re-released in a remastered package this year. Robert King now resides in France and his project Opium Kitchen and his solo work are LTW favourites. See Gus Ironside’s review here.

Anyway, back to Heavy Drapes-world; Research joining the band is something of a revelation. The meeting, if you like, of Edinburgh’s original punk scene with the new breed. They’re a band that are always seemingly on the verge of an acute psychiatric crisis and this could be the best or the worst thing they’ve done yet. I’ll tell you one thing; there’s never a dull moment with Heavy Drapes. We await the next installment of this punk rock soap opera with bated breath. 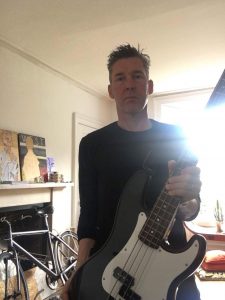