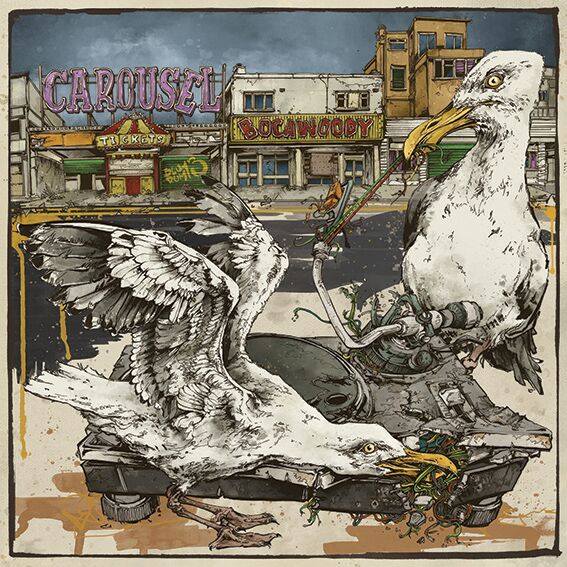 Bristolian beatmangler Boca 45 and UK turntablist powerhouse DJ Woody make up the crack DJ/production team known as BocaWoody. Following the success of their 2016 EP NW/SW and instant sell out 7″ release, the pair return with a killer debut LP!

Boca 45 aka Scott Hendy earned a mighty rep for his work with Andy Smith as Dynamo Productions, alongside Gee Ealey as Malachai (Domino Records) plus other collaborative projects and his many solo records. Boasting a raft of A List fans such as Serge from Kasabian and Huey Morgan (BBC 6Music), Scott DJ’d the opening of Dismal Land for Banksy and took mainstage at Boardmasters in 2016 for Roots Manuva.

DJ Woody aka Lee Woodvine is a twice World Champion DJ and described as ‘The best DJ in the World’ by Hudson Mohawke. His musical approach to turntablism has led to his skills being sought for tours and recordings with the likes of Tim Simenon, Madlib, Oli Teeba, DJ Vadim and Grammy Award winner Mala Rodriguez. 2016 saw the release of his solo album ‘The Point Of Contact’, which received a unanimous ‘thumbs up’ from fans and the music press. Stand out live performances included showcasing the DMC World Finals in London and a set for DJCity’s MikiDz Show in LA.

Joining them for five of the tracks is Woody’s longtime One Self (NinjaTune) and Russian Percussion cohort BluRum13. The New York born, DC raised and one time Montreal residing MC laces each track to perfection with his unmistakable voice and infectious rhymes. Also featured on the album is highly respected British keys player Christian Madden of The Earlies, Cherry Ghost and King Creosote.

The album is due for release in May 2017 with a special vinyl LP and 7″ single package complete with a stick of custom made BocaWoody Blackpool Rock! The lead single Jump has already found it’s way to many DJ’s ‘Party Hip Hop Sureshots’ crate.