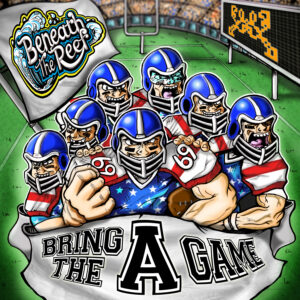 Wales’ premier ska / punk band, Beneath The Reef, are set to release a brand new EP on September 4th.

Entitled ‘Bring The A Game’ the EP consists of six tracks and will be available via the band’s own website as a CD or download.

Over the course of Bring The A Game’s six tracks we are treated to the high-quality, jump-up party atmospherics that the band have become synonymous with over their career and which has led them to become a hugely in-demand live act, supporting The Selecter, New York legends the Slackers, London-based outfit The Skints, America’s Rebelution, and headlining a stage at 2014’s BoomTown Fair.

The release of Bring The A Game is the culmination of a year that has seen the band embark on a massive UK headlining tour.

Watch the video for lead single ‘Our Destiny’ here:

Bring The A Game will be available to pre-order via the band’s own website: beneaththereef.co.uk.