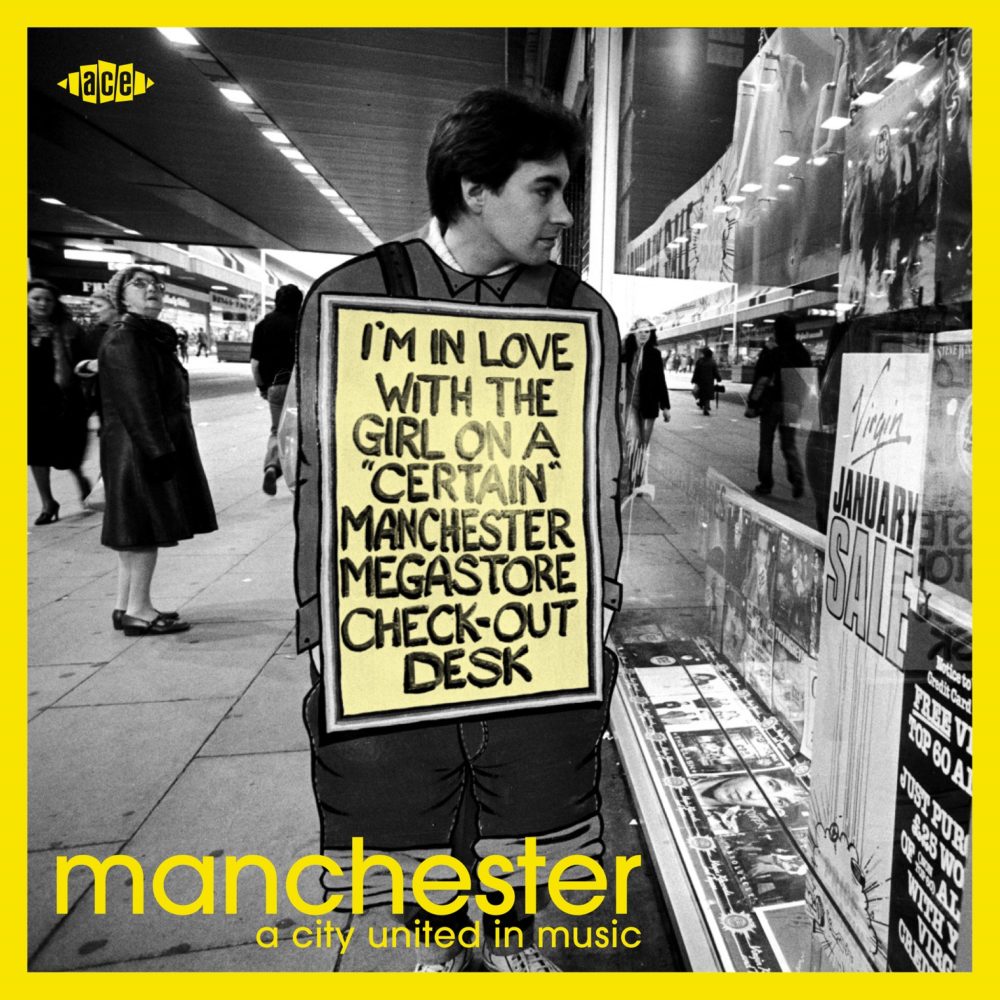 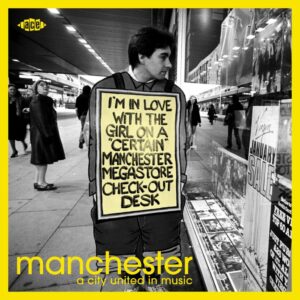 : A City United in Music. A more perfect title for a 45-track, 55-year spanning compilation of Manchester music would be impossible to find!

At 2 pm on Tuesday the 22nd of January at Manchester’s Gulliver’s pub, Ace Records launch their impassioned love letter to the city, a 45-track compilation that encompasses much of the music that has made the city a global cultural force.

The identity and brand of the Mancunian sounds selected for this package provide a sense of its eternity. The tracks move from the 1950s to the mid-60s when the city’s beat groups such as Herman’s Hermits, whose record sales in America were second only to the Beatles, and in 1965 no Liverpool bands came close to the dominance of them and two other Manchester bands – Freddie & the Dreamers and Wayne Fontana & the Mindbenders, who all topped the American charts. A short while later 10cc pioneered the way in writing and recording their music in their own studio in nearby Stockport. They produced hit after hit staying local, something the Beatles had talked about doing but failed to achieve with Apple. This “stuff London” attitude followed through in the 1970s with the Buzzcocks on the Rabid Records label, the Fall with their battle-cry ‘Leave The Capitol’, the irrepressible Chris Sievey & the Freshies on their own Razz imprint, through to the 1980s Factory label bringing worldwide success to New Order, Happy Mondays and others. Further contributors to the Manchester sound here include the second wave of “Madchester” bands such as Inspiral Carpets, along with others before and after like Simply Red, M People, Johnny Marr, the Stone Roses, Oasis etc.

Ady Croasdell of Ace Records states that “The idea for this compilation was given to me by record dealer Pete Smith, who like me is primarily involved with soul music as a day job but has had a love of pop music throughout his life. The track listing has evolved over about five years. A handful of preferred tracks were not available for licensing but the only major act missing was the Smiths, and indeed Morrissey’s solo work as a secondary choice. Johnny Marr’s superb ‘New Town Velocity’ goes a long way to filling that omission.

Basic but vibrant recordings by groups such as Pete Maclaine & the Clan and the Measles developed over the 60s to the more sophisticated sounds of the Mockingbirds and Haydock’s Rockhouse, until eventually the prog rock of Barclay James Harvest involved and employed enough musicians to represent the Halle. The musical geniuses of 10cc developed their own studio and revolutionised the sound of pop music from their Stockport base. The famously dry humour of the city is incorporated through Jilted John and the Albertos, while such uniquely Mancunian characters as John Cooper Clarke and Chris Sievey are rightly featured. Manchester punk was mainly earthy anti-art, which for me it was all about. The Buzzcocks were musically brilliant even when shocking and Slaughter’s relentless “You’re a bore” refrain said it all. As the birthplace of northern soul it is only right the city’s later soul credentials are acknowledged via M People, Lisa Stansfield, Mick Hucknall et al. Apart from taking over the world, Oasis renewed a million middle-agers’ faith in music and the Madchesters took it on. ‘Edward Fox’ by Smack is sheer genius – “What do the bookies think?”

For more information about the record launch head to their Facebook event page.