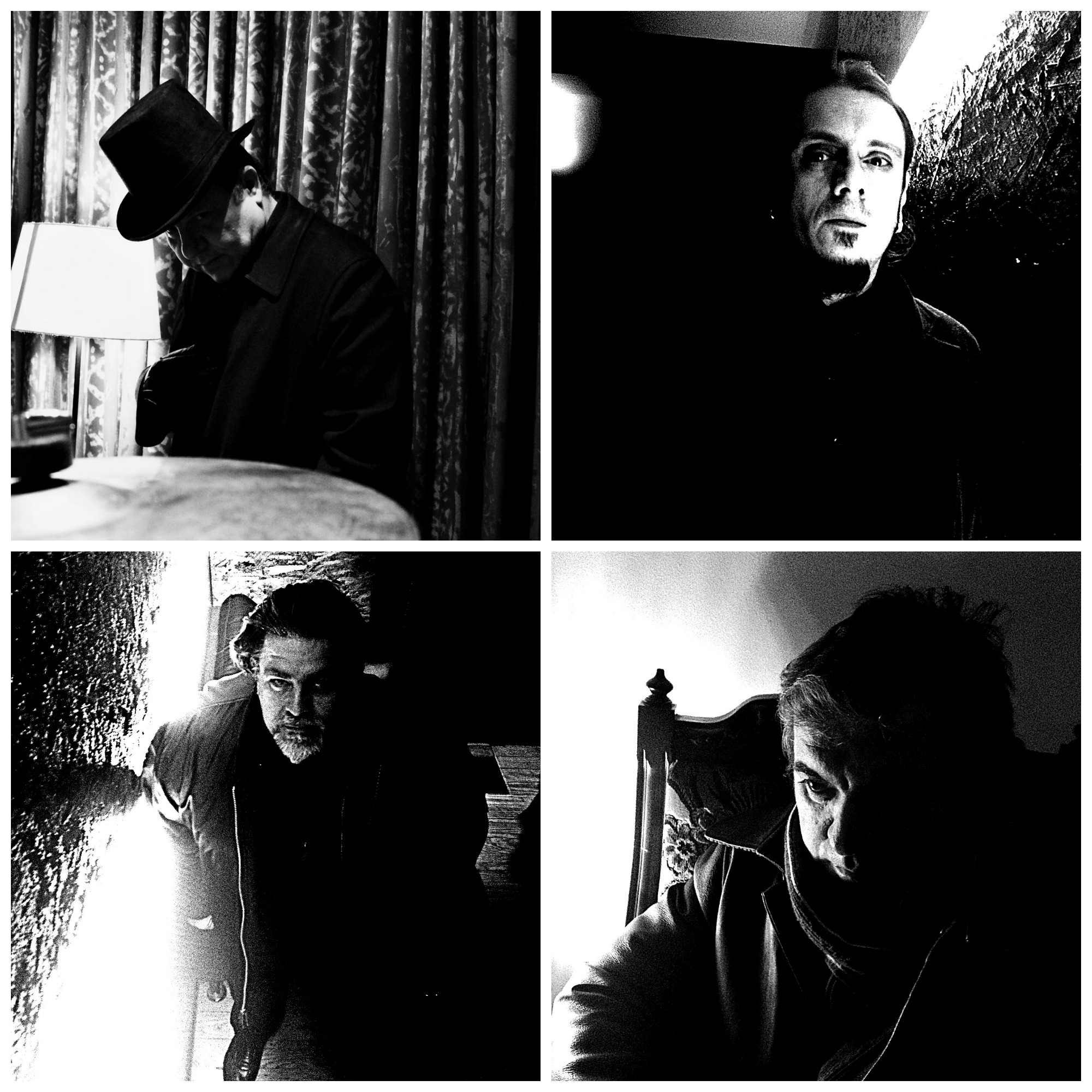 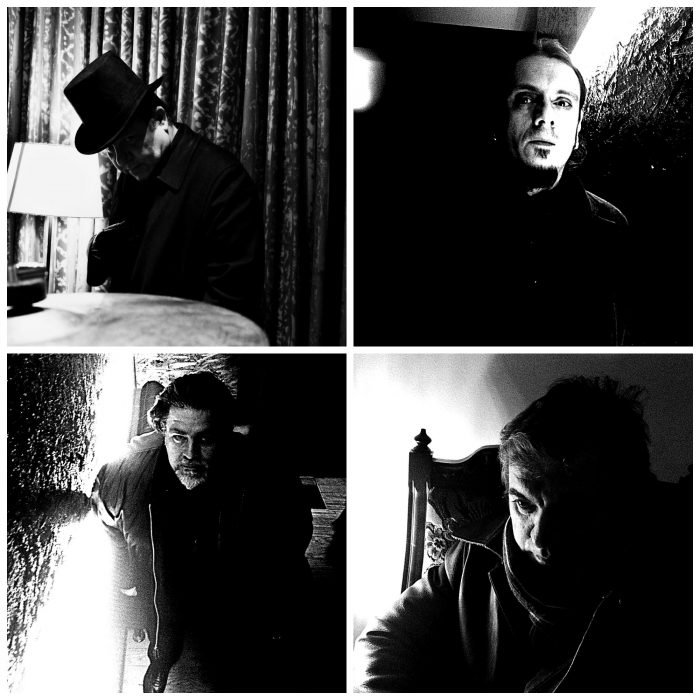 Telling about why he decided to start his band Mike Pougounas tells, – “I needed to express myself. I always had a thing for music. When the first Greek punk rock generation started, we all wanted to join a band. In 1981 I formed The Flowers Of Romance with some schoolmates. We used this name in order to pay tribute to Sid Vicious.”. Then in the mid 80’s the sound of the band evolved into post punk and later into Goth.  In 1998, three years after releasing their third album, produced by Wayne Hussey, Mike left the band and founded Nexus, releasing four more albums.  In 2005 they put Nexus on hold and in 2006 they founded New Zero God, returning to their original roots.

“Short Tales & Tall Shadows” album came out on CD and as a vinyl album during March 2016 with Mike Pougounas on vocals and keyboards, there is Harri Stavrakas on bass, Akis Nikolaidis on guitars, and Babis Efthimiou on drums and programming. John Psimopoulos is playing the drums on stage and does the mastering of New Zero God recordings. “The intention was to make an album about the grotesque with a romantic twist.”, Mike tells. “We wanted it to have a strong dose of theatricality. It starts with a song about E.A. Poe’s short story “King Pest the First” and keeps up with the same nightmarish atmosphere. I think it is our best work to date…”.

New Zero God released albums: “Fun Is A Four Letter Word”, the English label Secret Sin records released the mini album “Club Bizarre” and the album “MMXIII” (re-released a year later by a Greek record label) and “Short Tales & Tall Shadows”. New Zero God have also released the 7” single “Destination Unknown” and a 7” split-single came out in October 2016 with them holding one side with the track “Redemption” and the Scottish band Savage Cut feat. Bobby Deans on the other side. In 2012 they released the digital single “Second Chance” featuring English, American, German, Spanish, and South African musicians with all proceeds going to the American foundation HAWC (Help for Abused Women and Children). In 2013 they released “The Night Calls Your Name” with all proceeds going to the Sophie Lancaster Foundation, UK. 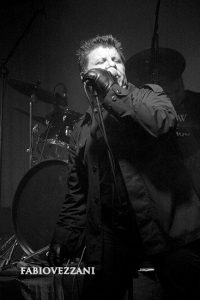 Speaking about writing music and lyrics for songs Mike tells, – ‘We all write the music in the band. I write a little bit more than the others… Ha-ha. All lyrics are usually mine. But, for example, Anna Psarreas wrote the lyrics for one of the songs of our latest album.  The rest of the lyrics are all mine…”

Talking about the meaning of New Zero God songs and the main idea of their albums Mike tells, – “I think all our albums are more or less dealing with human nature. Being straight forward or covered in metaphors, I am writing about Isolation, selfishness, love, hate, loss, death… I believe mankind is becoming more unstable day by day. Self-destructive, even in everyday relations. On our first album we had a song called “Bang Bang” about a real incident that happened when the stockholders on Wall Street, with their actions in the stock market, caused conflicts on the other side of the world.  The price of rice went sky high after they bought and sold raw material resulting in a huge rise in the price of food. I don’t know if describing reality is less scary than “King Pest’s” atmosphere in our last album. I think civilization took a giant step back to the dark ages. Everything changed around us and we didn’t notice. At least this is how it looks ‘cause we don’t do anything to fix things… and like our song, “Garden of Mazes”, we are all trapped inside our brains…”

“A few months ago I received a promo of a Scottish band from the American label Custom Made Music to give it a listen and air it through my radio show.”, – Mike tells. “ The band’s name is Savage Cut and the track is called “I Can Kill You With My Brain”. I liked it a lot and I played it a few times. When we released the vinyl edition of our album John Innes, the bass player of the band, asked me if New Zero God would be interested in releasing a split 7”. So we offered our track “Redemption” and the single came out through New Savage Records. I believe people need to work together. It is a lot easier for artists coming from different parts of the world to show to the world that we can all work together. Savage Cut featuring Bobby Deans offered “Madhouse Magical” and people can find it in some record stores in the UK or directly from Savage Cut’s Bandcamp or directly from New Zero God.”

Talking about the most definitive songs of New Zero God Mike says, – ““Short Tales & Tall Shadows” holds some of my tracks that I love the most. “Bastards” is one of them. It is about that 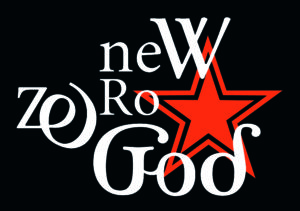 outcast we knew in our youth who became our guiding light. The one that was thinking out of the box and the system never took him alive…  “Pen Like A Knife” is a track available only on the vinyl edition. You know all these couples that break up and they are back again and then they have a fight and they break up and after a while they are back again… That song is about them. It suggests that you keep her/his name in your heart and go on with your life…”

To the question what music style is New Zero God Mike says, -“I wouldn’t label it. Labeling your music is good only for record store keepers. I see reviewers calling it Post Punk and Goth. To me it is music. It is like building new worlds. So, I let people call it whatever they like. To me, my music is a part of me…”. “Punk Rock was the main influence in my life. Not just musically but it made me think out of the box. When I was a kid it started with the music. But then, I found my own way of thinking. I believe this is what it was all about. It started with the Sex Pistols, the Clash, the Damned… The Lords of The New Church was the reason to change my first band’s sound. I still watch John Lydon’s interviews with a smile on my face. I met David Ruffy a few years ago… long after Paul Fox died… “In A Rut/H-Eyes” of the Ruts was the first 45’ I ever bought… And then, all the other musicians through the years. Joy Division, Bauhaus, The Sisters of Mercy, The Mission… I could go on forever…”

As a member of The Flowers of Romance, Mike Pougounas supported The Sisters of Mercy and New Model Army at the Rockwave Festival in 1997 at the Rizoupolis football field. As a member of Nexus Mike Pougounas opened for The Mission at 8ball Club in Thessaloniki in 2000. With New Zero God he supported The Legendary Pink Dots at Gagarin Club, Athens, in December of 2007, and also opened for Christian Death in May of 2008 at Underworld Club in Athens. 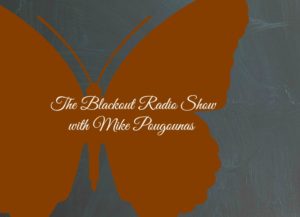 www.wickedspinsradio.org.”, Mike says. “It is aired every Thursday 7PM – 9PM UK time. I am mostly spinning new Post Punk, Goth, and Punk Rock releases from all around the world. Sometimes the playlist holds new electro or psychedelic tracks or a couple of old tracks from the 70’s or the 80’s. A couple of years ago an American radio station from California asked to air my show. So now, in addition to Wicked Spins, you can listen to Blackout through KOWS 107.3 FM every other Tuesday from 10PM to Midnight (Pacific). About four months ago Radio Fréquence Bordeaux (https://www.rfb33.com/) started putting the show on air every Wednesday 8PM to 10 PM French time. So now, the show goes on air through American, French, and English radio…”

Talking about what’s coming up next for New Zero God Mike says, – ‘ We are recording some tracks for a few compilations in Germany and the UK. We are also looking for any gigs in Europe. Waiting for confirmation for Italian and French gigs and if we get a green light from them, there is interest by some promoters to get us to the UK.’

New Zero God will have gig on on the 5th of November on the island of Corfu, Greece, and then the city of Volos, Greece.