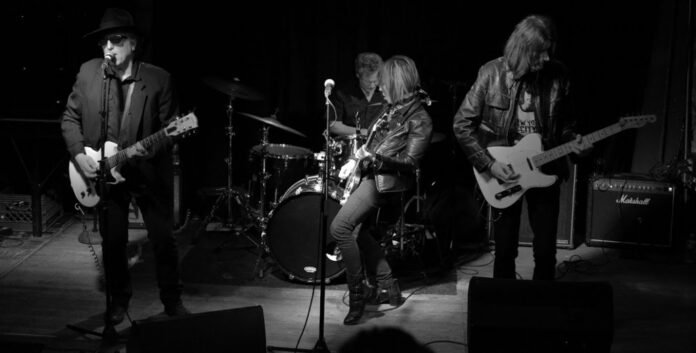 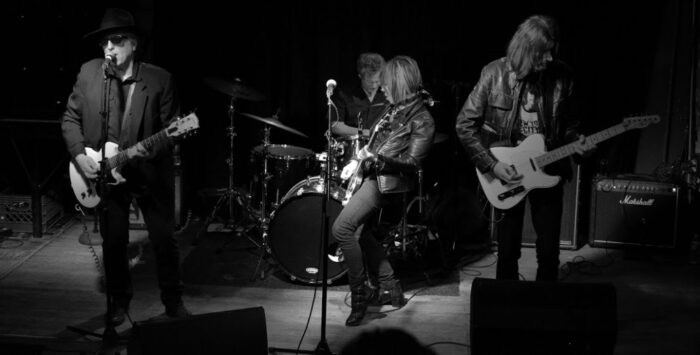 New York rock & roll with a Detroit fuel injection that brawls like the Stooges and the Heartbreakers taking on the local biker gang in a downtown rumble.

There’s a savage beauty to Johnny Thunders and the Heartbreakers’ ‘LAMF’ album and its revolutionary antecedents, ‘Funhouse’ and ‘Raw Power’ by The Stooges. That same spirit suffuses New York Junk’s ‘Doing Time in New York City’, as this quintessential NYC band of survivors make their own backs-to-the-wall Alamo stance against gentrification and the loss of the street poetry and soul that was ingrained in the city in the 70s and 80s.

New York Junk’s 2012 debut album ‘Passion of the 10th Street Blues NYC 77’ was haunted by spectres of friends and lovers taken too soon, but this new release sees the 4 piece in belligerent mood, dishing out steely, measured salvos in authoritative fashion. These are New York Junk’s streets and they stake out their turf in uncompromising fashion, swaggering Like Jerry Nolan and Dion DiMucci out on the town with Sinatra’s Rat Pack. Producer Ron Synovitz of Golden Digital Studio in Prague has captured the band’s live intensity with perfect clarity and depth.

Frontman Joe Sztabnik served his apprenticeship in The Dragons and hung with Johnny Thunders and Dee Dee Ramone, with whom he wrote several songs. The best known of these is ‘Poison Heart’, a single for The Ramones in ’92, although Joe didn’t receive a writing credit at that time.  Stabnik comes across as a (very) bruised and battered romantic in the 6 songs on this EP, world-weary but cherishing all the more the friendships and loved ones who make life what it is.

Vocally, Sztabnik sounds rather like a New York-accented Link Wray, basically an urban bluesman with warmth and charm apparent under the surface spikiness. Link’s in the music too, as Joe’s Les Paul and Jeff Ward’s Telecaster dole out gutsy slashed chords, laden with menace and measured aggression. The lead guitar-work is squarely from the school of Thunders, Lure, Asheton and Williamson, satisfyingly intense and bluesy.

Cynthia Ross started her rock & roll career as bass player with Canadian garage-pop punks The ‘B’ Girls and apparently discovered the elixir of youth somewhere along the way. Ross keeps the low end punchy, tight and in-the-pocket, never show-boating, always at the heart of the songs.

Did I mention gentrification again?  Yes, because ‘Doing Time in New York City’ is defined by its oppositional stance to the ongoing entropy and destruction of what made New York such a vital hub of artistic activity in the past. This is a group that knows that history inside out and refuses to go gently into the night.

There’s a hefty dose of Pirate Love swagger and strut in the dynamics of these songs, making the connection to an oft-overlooked influence on American high energy rock & roll, London group The Yardbirds, whose ‘rave-up’ arrangement style on tracks like their cover of  Tiny Bradshaw’s ‘Train Kept a-Rollin’ influenced a swathe of young bucks, from The Count Five to The Stooges, Aerosmith and the New York Dolls.

Title track ‘Doing Time in New York City’ sets the scene, brutal Ron Asheton riffing made all the more intense by the clever dynamics of the song. ‘Love Song to my Mirror’ continues the Stooges vibe in a raw piledriver of a track as Joe warns “I’m living free in the land of the free…don’t bother me.”  Closing side one (‘Avenue A’ on the label!), ‘Find Your Own Way’ is an intense, gritty garage rocker which summarises the street smarts Szatbnik has earned in the last 4 decades: “I don’t want to preach to you, ‘cos I got nothing new for you, other than you got to find your own way…out.”

Flip over to ‘Avenue B’ and ‘I Know Everything’ kicks things off in fine style with notes of 60s pop and a great Willie Dixon-esque groove, again squeezing every last drop of swagger out of its shifting dynamics. Next up is the album’s epic centrepiece, ‘I Ride the Subway Train For You’, powered by a measured riff that evokes Roky Erickson & the Aliens jamming with Sonic’s Rendezvous Band, the tremolo effect on the guitar again recalling Link Wray on his earth-shattering ’58 single, ‘Rumble’.  Szatbnik is now deep in New York blues territory, riding the trains, searching for an unreachable lost love, perhaps a place or state of mind as much as another human being.  The frontman’s Dee Dee Ramone collaboration, ‘Poison Heart’,  brings the curtain down in elegiac style, with keening lead guitar reminiscent of Thunders’ ‘So Alone’.

We all know only too well that you can’t put your arms around a memory, so let’s celebrate those who’ve lived to tell the tale and pass on the torch. ‘Doing Time in New York City’ deserves a place in your record collection, and more importantly, it’s hard to get the damn thing off your turntable after the first listen- this New York Junk is addictive stuff.

Doing Time in New York City’ is only available on vinyl. If you’re lucky enough to be in NYC on October 8th, you can buy a signed copy at the launch party merch stall.

EP launch party at The Bowery Electric, NYC on October 8th with stellar support from Walter Lure & the Waldos,  Sonny Vincent, The Everyothers and Zin Vetro.

Image by Maxwell Sztabnik. Many thanks to Max for his kind permission to use this excellent live shot. More photography by Maxwell Szatbnik can be found here.

“All writing, all art, is an act of faith. If one tries to contribute to human understanding, how can that be called decadent?”  Truman Capote.