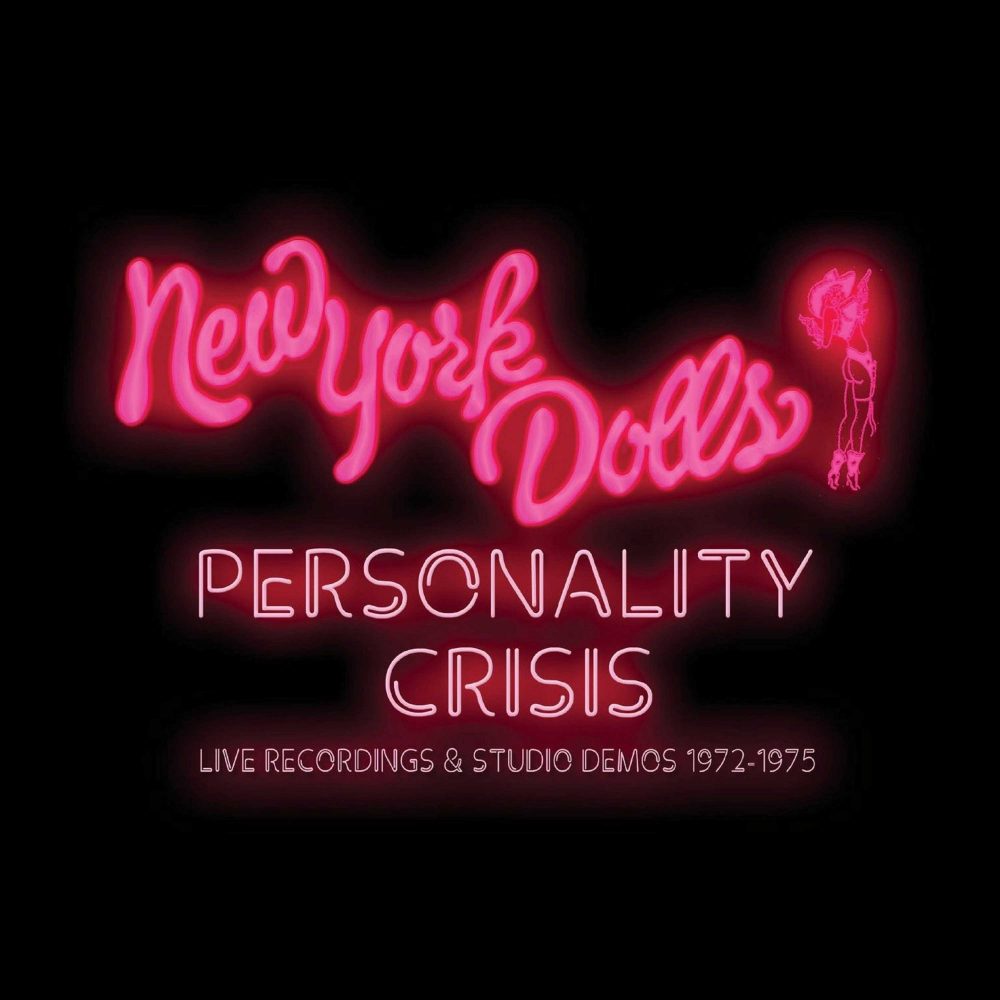 Fast and flash, fiery and exciting, seemingly forever on the verge of collapse, but somehow always making it through with goofy grins on their lipstick-daubed fizzogs, the New York Dolls may have been the first band to get a grasp on 70s city life and were a true inspiration. They split up when I was just a nipper, but the chain of events that they set in motion would reverberate through the music scene right up to the present day. Getting hold of their albums in the pre-internet 1980s was a mission in itself. Ordering and waiting weeks at my local record shop was the only real option for me, as they didn’t even have them in the big “mega-stores” in town. In my wildest dreams then I would have never imagined seeing the Dolls live, as I did many years later at their Royal Festival Hall comeback gig and an incredible show at the Talking Heads venue just a couple of miles from my doorstep.

When those two Mercury albums were finally secured they were fine in themselves, but the production jobs on both (by Todd Rundgren and Shadow Morton respectively) didn’t do the Dolls a lot of favours. Even though their raw power always found a way to shine through. An early take of their call-to-arms Personality Crisis sans piano, which I found on a cheap compilation album in Woolworths would you believe, made it explicit in my mind. I wanted more of this rough stuff and over the years a mixture of live and demo material emerged. Personality Crisis: Live Recordings & Demos brings together a raft of this material in one neat box.

If, for a while, we can for once stay away from what the New York Dolls played a huge part in influencing later on and instead concentrate on what they actually achieved during their life-span, we can perhaps see them for their original importance and appreciate their truly exciting music. They kick-started a new scene in their home town, that was still recovering from the Warhol-dominated 1960s and made burning attitude rather than boring aptitude a factor in music again. After developing out of earlier outfit Actress, Johnny Thunders, Sylvain Sylvain, Arthur Kane, Billy Murcia and David Johansen began making their name at the crumbling facility the Mercer Arts Centre, but the Dolls profile rose exponentially until they were the talk of the city.

I remember hearing a quote along the lines of “The Dolls made music from the kids riding the IRT” – seeming that they were more for the loyal street kids who, finding a band that they could truly identify with, followed the band around a network of venues via New York’s tube train system. The influx of these youngsters into venues like Max’s Kansas City put a few art-scene noses out of joint, with Lou Reed penning the sour New York Stars as a response. They couldn’t be stopped though, as the Dolls had breathed fresh life and new energy, pushing the oldsters into either joining in or missing out. As they began to make waves they decide to record some of their set, just as a rough experiment really.

The nine tracks from that initial 1972 session (which was released as Lipstick Killers by tape label ROIR in the 80s) captures the Dolls at a crucial stage in their early development. Though they were attracting attention as rising stars in NY, on this recording they sound a little uncertain on occasion, still working things out and the pace of some of the set is a bit slower. On their first trip to the studio, Johansen’s vocals aside, they sound not as quite cocksure as they soon became (but that’s still pretty cocky!). It is no handicap to enjoyment though as their relative innocence and limited expertise works largely in their favour. There is a glimpse of the vulnerability that was mostly hidden behind the Dolls’ in-born swagger and hearing this, coupled with the simple-but-effective production, is totally endearing.

In a mainly brittle soundscape, sometimes the rhythm guitar materialises in ghostly shimmers and the lightening flashes of lead have a shocking effect, as they blaze in and out. Often it is left to the drums of Billy Murcia and Arthur Kane’s bass to give the structure to the songs. Arthur’s contributions might feel simplistic, but they were vital in giving the tracks here added bounce and they mesh well with the ill-fated Billy Doll’s drum tattoos and cymbal splashes. Bad Girl works particularly well in this form, David’s assertive vocal playing off against the more spartan but gutsy backing music. Frankenstein comes jumping out the gate, fully formed, an instant classic. A great version which sums up all that was good about the New York Dolls.

By the time of the second session, recording during a UK junket at Escape Studios in the Kentish town of Egerton, the Dolls had grown into their roles a little more and sound at home in the studio environment (Despite the chaotic circumstances detailed in the accompanying booklet). This is a less restrained recording, with much of the guitar mayhem that is associated with Thunders and the band in place. The Dolls meant business here, a four song blitzkrieg that climaxes with a cracking version of Subway Train. Sadly this would be the last recordings with Billy, who died from after a botched attempt to cure a drug overdose by his fellow party attendees just days later. The Dolls flew home after this tragic accident to an uncertain future. After a while though they recruited Jerry Nolan after a host of auditions and pressed onwards.

They were quite close to signing to Mercury when they recorded the third and final set of demos here. Paul Nelson, part of the band’s management team along with Steve Krebs and band godfather Marty Thau, produced the session and kept it nice and simple, in contrast with the later efforts of Todd and Shadow on their officially released albums. This is a superb recording, with a lot of studio chat left in and a false start of It’s Too Late. The majority of the material that they recorded on those LPs was already in place. Only Puss In Boots, Chatterbox and Stranded In The Jungle are missing over the course of these demonstration tapes, proving what an inventive song-writing outfit they were and how well they could render a well selected cover.

That Endless Party could have been ignored (it went unreleased at the time), only forces home the fact. The song is a free-wheeling wonder of Dolls attitude. Their versions of Willie Dixon’s Hoochie Coochie Man, Pills (original performed by Bo Diddley) and Sonny Boy Williamson’s Don’t Start Me Talkin’, shows the Blues that was always close to their hearts. The take of Subway Train in this set for me is definitive, spine-tinglingly great! Should have been on the debut album proper.

The live stuff is a little more disposable, but still listenable, being mostly of good bootleg quality. In the early selections from Paris and Detroit we get an early version of Chatterbox entitled The Milk Man and Lone Star Queen makes an appearance in the latter. The Detroit New Year’s Eve 1973 show has a nice period intro from the radio show’s host even if it cuts Personality Crisis in half, but the set from 1974 recorded at Vancouver steals the show. It is electric: the sound is very good all things considered, the band play a blinder and Johansen is in his element. On the cover of Give Him A Great Big Kiss, David and Johnny spar back and forth in a humourous fashion – it’s clear the band was having a good time at the very top of their form.

The following show from Dallas is good as well, a slight drop in audio quality but not too bad at all. Starting with the guitar instrumental that they had began to use as music to take the stage to, they’re straight into stinging versions of Personality Crisis and Vietnamese Baby, they sound on fire this night too. This also includes a good take of Lone Star Queen towards the end of the show.

The final selection comes from the infamous New York Hippodrome gig in 1975. The Dolls had been put on the back burner by Mercury at this point, but had diligently wrote some new songs in order to offer the record company a third LP. Johnny Thunders had come up with Pirate Love and Sylvain offered Teenage News, which both would utilise in their future careers. Others from the set like Girls Girls Girls featured on David Johansen’s early solo live set. Arthur Kane had been more or less replaced at this point by his “stunt double” Peter Jordan and Malcolm McLaren had inveigled himself in the band’s management to an extent that is still disputed. Keyboards began to be employed on stage and Malcolm had kitted them out in red leather uniforms and come up with some sort of communist chic. This was fated not to work and soon after this gig the band split up.

Listening the material now, there was enough going on there to provide a decent third album from the Dolls. The cover of Eddie Cochran’s Something Else surely provided the template for the Sid Vicious version and Red Patent Letter has a deep and doomy, but catchy, hook to it. On Fire sounds good too, the jazzy shuffle of the intro pre-dating Richard Hell’s Blank Generation. The electric piano sounds a bit out of place on Thunders’ Pirate Love, one reviewer called it something like “PIL jamming with Reg Dixon”, but in fact it’s just the Dolls’ usual strut with the keys gaudily dancing atop. After Teenage News they bring it home with a handful of their classics, Personality Crisis seguing into Looking For A Kiss and a theatrical version of Stranded In The Jungle. It was a shame they never got the chance to put down some of the new material in a studio, but time was running out fast for them. To all intents and purposes, after this show, they were gone.

Though most of this material has seen the light of day elsewhere it is good to finally have it altogether in one place and housed in a handsome box with some enlightening sleeve-notes. Each separate disc come in a different, nicely designed mini-sleeve too. The demos are particularly vital, great recordings of the band at their prime, essential for fans of the band and even a good starter for newcomers. It will give all a crystal clear indication of where they were coming from. Everything feels right to this Dolls fan. This is a beautifully presented and thorough collection which does the glamour and glory of the band justice. You baby dolls can sleep soundly tonight.