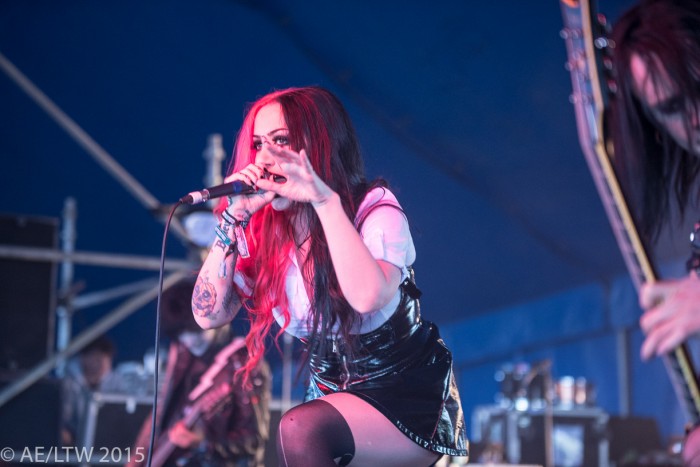 It seems barely believable that Californian outfit New Years Day have been around for a decade. Alan Ewart caught up with the band after their set at Download Festival to talk about music, fashion and creativity.

It’s hard to categorise New Years Days sound.  They certainly cross genre’s at times and they have drawn comparison wit American pop punk outfit “Fall Out Boy.”  In fact some have even, rather unkindly, labelled them as “Fall Out Girl.”  There are certainly parallels between the bands but New Years Day definitely plough their own furrow.

I put it to New Years Day that there seemed to be something of a resurgence in West Coast based punk bands.  They said that they felt a lot of that was down to fashion rather than attitude.  “A lot of kids think its cool to wear a Ramones T-shirt and say, ‘I love punk.’  It’s more of a fashion statement, they don’t understand that punk started out as an anti-fashion statement.  Sometimes they don’t get the fact that punk is about an attitude and an energy. We are trying to explain that through our music.”

Watching their Download performance I was very much reminded of the high energy performances of the likes of X-Ray Specs, The Slits and more contemporaneously of Sleater Kinney.  Vocalist Ashley Costello is a very strong, exciting and dynamic focus for the band and I have to confess I fell a little bit in love with her, please don’t tell my wife!

With her long wavy hair dyed half black and half red, her tight black PVC mini-dress and her stockings slipping down her legs Ashley looks every inch the punk princess.  Judging her on her appearance would be a huge mistake.

Costello is an ambitious, driven and determined maelstrom of creativity.  Nikki and Tyler told me after the show that “we have never worked with anyone so driven.  She is so creative, so hardworking and determined.  She sweats blood and tears for this band, she is simply incredible.”

For the rest of the band it is clear that Ashley is a leader. When I asked the guys how it was to be working in a female fronted punk band they seemed slightly taken aback. They told me “we don’t really see it like that. Ash is so creative and inspirational that we don’t think of New Years Day in terms of being female fronted.  It’s just Ash.” They did confess though that they would love to see more female fronted bands around simply because it would encourage more girls to chase their musical dreams. “Rock needs more female role models” they say.

They feel that the progress of New Years Day as a band has been held back by numerous changes of line-up over the years. This has stifled development and was largely responsible for a six year gap between albums.  They were also hit by their label going to the wall but they feel that they are really in a great place now.  The band got an EP out last year and an album is planned for later this year.  As a result they feel that the line-up is now settled and that they are in a place to enable them to kick on to the next level.

I thoroughly enjoyed seeing New Years Day.  They are a tight, energetic and entertaining band with a great sound and a fantastic focus.  The current lineup is strong, they play pop punk tunes with passion.  Their guitar work is exemplary and the rhythm section drives their songs along at a breathtaking pace.  Without a doubt New Years Day were one of my finds of the festival.  I will watch them with interest when the new album is released later this year.

New Years Day are on the internet here.  They are on Facebook and they Tweet as @NYDrock