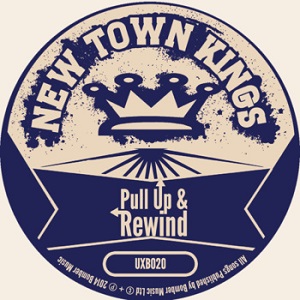 Often a pre-requisite with reggae bands, New Town Kings are made up of a truck load of members. Unsurprisingly hailing from New Town near Colchester the band have re-released Pull Up & Rewind EP containing four tracks of well-produced reggae in a few styles which whilst not revolutionary, are actually pretty good.

Opening the EP with Change, a pop-reggae call to arms with political overtones on the state of the nation. People uniting, international greed and World change are skilfully included in a catchy, well-constructed song which could become an earworm for the day. Horn sections are polished and well executed and the vocals are comfortable and pleasing.

Luna Rosa sees the band journey down the much ignored ska genre. It’s always fun and induces movement and this track is no exception. Good use of Hammond organ and an impressive horn section again, there’s the feeling of a great dub version surely bursting out of this.

There’s a confident move towards good old lovers rock with Grabbed My Hand and the master of the genre, Gregory Isaacs is easily seen as an influence. A lazy sound of Summer may be slightly misplaced as the English Winter draws in, but you can almost feel the sun trying to break through the clouds as you attempt to wriggle your toes in the sand.

Closer, Cool The Pressure Down tips a wink to roots reggae with a modern twist. Basic, empty backing with a strong guitar which is well up in the mix, there’s the perfect opportunity for a dub break as two and a half minutes approaches and a lovely sax solo as the track fades out

An accomplished band tackling four styles of reggae with extreme confidence. Some good dub remixes of Pull Up & Rewind would also be something to relish.