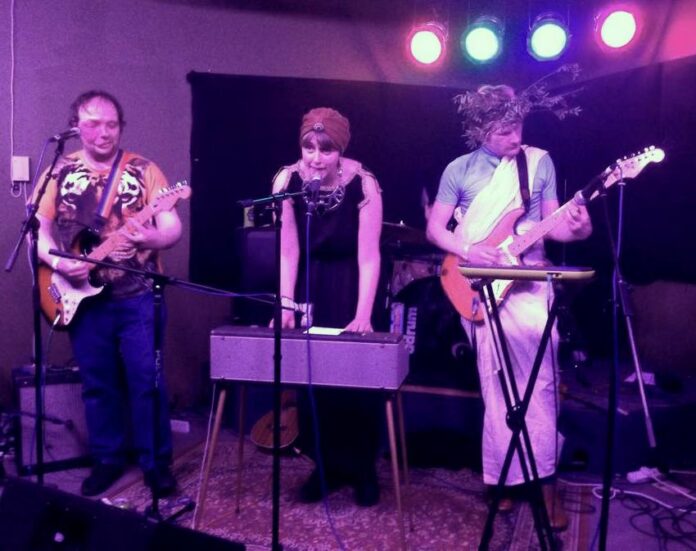 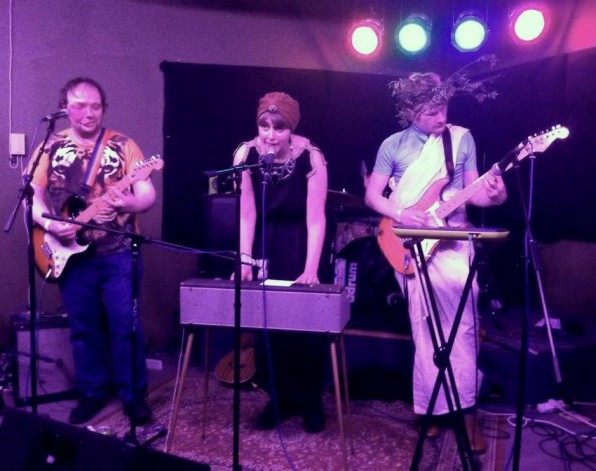 Photo above: No More Tigers © by Katie Pope

Keep Believing, There is Hope.

30 years into leading BMX Bandits Duglas T Stewart celebrates some of the new groups that give him hope for the future of Scottish pop.

Part one: No More Tiger at Pop!South at The Glad Cafe, Glasgow, February 14th.

There is a terrible trend in music just now of being overly earnest and that is rotting through both the mainstream and what is perceived as being the alternative. Actually it’s not just in music, it’s happening way too much in most of the creative fields. I think earnest is pretty much my least favourite thing music, film or T.V. can be. You’ll have a TV writer giving the Doctor in Doctor Who a speech that they seem to think is as profound and as quote-worthy as Martin Luther King’s “I have a dream” speech and in an instant they’ve spoiled a good fun episode. There is a real misconception that by being earnest you make something more worthy, more profound and more moving; wrong, wrong and wrong.

Some “artists” will use it to boast about their virility or to show just how sensitive they are in a narcissistic way – but don’t trust them. Their being earnest does not mean they are telling the truth. Don’t let them fool you. They forget that understated, funny, dumb and honest can be profound and will ultimately make a deeper connection because it’s for real. So it’s refreshing and reassuring when a group like No More Tiger comes along, where there’s none of that dire earnestness and they seem totally contrivance free. They seem like a “for real” gang of misfits singing good, genuinely quirky and warm hearted songs.

Okay I’ll admit it one of No More Tiger is also a BMX Bandit but that’s got nothing really to do with it, honest. For the last 6 months or so I have been finding life hard and finding very little joy in the world, I’m not normally like that, but during No More Tiger‘s 40 or so minutes on stage at the Glad Cafe it felt like things made sense again and that the world and I were going to be okay. Now of course, I know their music isn’t really going to end all of the world’s crises – or mine – but feeling all better, even for a little while is a very good thing. 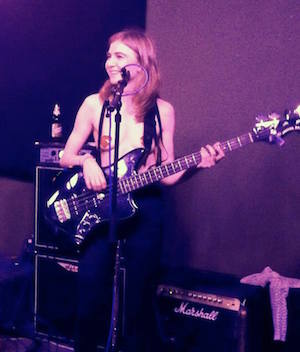 They sing songs about bus routes, doppelgängers, people lost on desert islands, siblings falling out, local rebels and, according to singer and multi-instrumentalist Flore, about nothing at all. I’m not sure I believe her. There are echoes of The Andrews Sisters, The Ink Spots, Jonathan Richman, The B52s, The Cookies in their sound and even a touch of Moondog, but they still have a unique and strong musical identity all of their own. They wear funny and sometimes sexy outfits on stage but it’s never wacky, it always seems super cool without trying and just right. There’s also a lovely warm very charming easy humour between the members of the group on stage that makes you feel glad to be in their company while they are on stage together. One particular in between song fun moment was when Jim noticed Chloe’s special Valentine on stage outfit and couldn’t hold in his surprise. (See Chloe smiling at Jim’s surprise right, photo © Katie Pope).

Jim McAteer’s country tinged You’re Not My Friend, featuring bassist and flautist Chloe (the aforementioned Bandita) on lead vocal, really needs to be a single. “You’re not my friend I don’t like you. I know that you don’t like me too. I tell you what we’re going to do I’ll count to ten and then we’re through.” I sing along with almost every word but quietly so not to ruin other people’s fun and I smile from start to finish at their shows.

They are next playing at Warren McIntyre’s Seven Song Club at the Tron Theatre in Glasgow with the very fine Strange Blue Dreams on March 13th. If you can possibly make it you really should try to be there. Get tickets here: https://www.tron.co.uk/event/strange-blue-dreamsno-more-tiger/

I reckon No More Tiger could be the happiest sound around.

No More Tiger have an album available on: Bandcamp.

Part two: Three of my other favourite new Scottish groups: 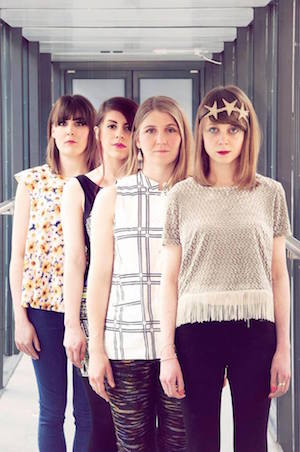 TeenCanteen (photo, right): There is a strong flavour of the classic era of Girl Groups and Brill Building songwriting in what they do but mixed with the likes of Cyndi Lauper and New Order. Also, growing up in the age of Kylie being the queen of pop has clearly made an indelible mark on them. Like The Ronettes and Shangri-las teen heartbreak and longings are the prevalent themes but here they are set in a 21st century Scottish landscape. The groups leader Carla Easton is a major songwriting talent I even recorded one of her songs ‘Fireworks’ on the last BMX Bandits album. They are currently completing their debut album.

Elara Caluna: Think dreamy, a bit like lost songs for a David Lynch movie meets the darker stuff from the second Specials album meets William Blake in space … I know what I mean. Anyway their sound is as fragile as it is beautiful. Their first single Silver Dust will be released this Spring on Jim Lambie and Jason McPhail’s Voidoid Archive label.

Dr. Cosmo’s Tape Lab: Former leader of The Owsley Sunshine Joe Kane teamed up with the most prolific man of recent years in Scottish pop Stuart Kidd. Although they’ve only existed little more than a year they are about to complete recording their fourth album. There are references from pretty much every era and genre of pop imaginable but re-made for the sort of 21st century I imagined we’d be living in (with jet packs and robot companions). It’s retro-futuristic psychedelic pop fun with lots of great pop hooks, moments of exuberant silliness and genuinely touching pathos. The first album released, the second recorded, Ever Evolving Lounge will be followed up by their first recorded album Beyond The Silver Sea on Sugarbush Records at the end of March. Their must see live shows are a strange but very pleasing blend of musical brilliance and untamed craziness. Sorry if that is confusing.

Dr. Cosmo’s Tape Lab are on Bandcamp and Facebook.

All words by Duglas T Stewart. More writing by Duglas on Louder Than War can be found at his author’s archive.