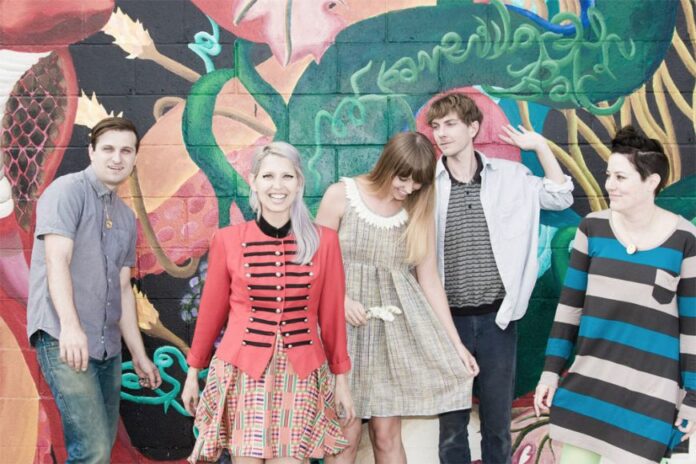 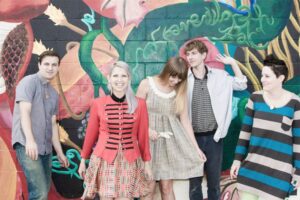 Fans of delightful indie art-pop have something to smile about this summer with the news that the Team Love label  are throwing Tilly And The Wall back into public consciousness.

The single Do You Dream At All will be released on 30 June, lifted from the reissued mini-album Woo! This sits alongside the release of the accompanying 2002-2013 retrospective album, I Want To Fu<3k It Up.

Having grabbed the attention of the music press with the quirk of tap dancing as percussion, the Omaha five-piece indie darlings released a string of buoyant and brilliant records filled with charisma. Their warm joy is easily explained as they describe how, on Woo!, they “recorded our first set of songs in a friend’s basement during the early winter of 2002. It’s a record that only could have happened in Omaha, with the perfectly organic blend of innocence, joy, magic, youth and the bonding of five friends who became family for life.”

The passage of time has almost seen something of a fight for a kind of Art-Indie Canon of the Noughties era, and I Want To Fu<3k It Up, a collection of their works from 2002-2013, confirms just why they belong there. The title, implying messy rebellion with love at its heart, sums up the band perfectly. Their best remembered chant-along-friendly gems The Beat and Pot Kettle Black, sit amidst a wider selection of their more unfairly overlooked treasure trove, which should hopefully draw more attention upon this release.

Woo! also deserves to be regarded as an underground classic, full of joyful spirit with a  twist of prettily yearning melancholy. The title a carefree proclamation of joy, that buoyant excitement is still very much felt from the offset with the bustle of studio noise. But this pulls us into a world of musings of sadness, distrust and staying in bed. Like the bitter heart of a sugared almond, TATW provide kicks of heartfelt reality in something still ultimately sweet and delightful. It’s a punch drunk house party at its woozy turning point, except were some records would let the crying in the kitchen escalate, Woo! offers an arm round the shoulder and a reassuring word.

It’s this kind of warm inclusivity that marked TATW out from the crowd. Share your tears and let them dry them (and pour yourself a cocktail and resume the fun.) The party is clearly still at Tilly and The Wall’s, and everyone is still very much invited.

Pre-orders for both records via Bandcamp can be found here:

All words by Amy Britton. Find more on her archive at https://louderthanwar.com/author/amy-britton/