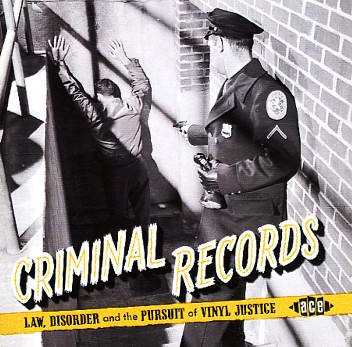 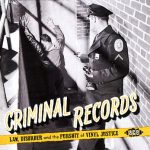 As the title suggests, this superb compilation brings together excellent 50s and 60s rock ”Ëœn’ roll, R&B, blues and country and western songs with the common theme of crime and punishment.
Complied by Tony Rounce and Tony Watson, Criminal Records is a veritable riot of first-rate lawbreaking and law enforcementrock ”Ëœn’ roll music, with some cool related movie posters and book jackets in the accompanying booklet. 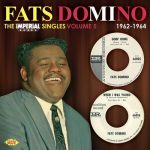 The fifth and final volume in the fantastic Ace Fats Domino Imperial singles series reaches 1964, covering all the A and B-sides and includes a couple of contemporary album tracks in stereo. The rest of the CD is in original mono and never deviates from the true singles masters as they were issued in the USA. This compelling volume covers the period just as Fats Domino’s ten-year run of hits was slowly coming to an end and includes singles released on Imperial after he had left for ABC Paramount in 1963. This is the least reissued period of Fats Domino but contains much of his greatest work. Fats’ star might have waned, due to changes in taste of teenage fans (competition from rival New Orleans and Louisiana R&B acts, Dylan and the British Invasion sound were gaining ground) and switching record labels, but his material was still top quality.

The sides here include ”ËœJambalaya’, ”ËœYou Win Again’ and ”ËœYour Cheating Heart’, Domino’sdaring interpretationof the songbook of the eminent Hank Williams, recorded simultaneously as Ray Charles was shifting the countenance of R&B with covers of other country material. There is some terrific New Orleans R&B in ”ËœI Hear You Knocking’, ”ËœYou Always Hurt The One You Love’ and ”ËœGoin’ Home’, coupledwith superb original songs such as ”ËœMy Real Name’, ”ËœIda Jane’, ”ËœDance With Mr Domino’, ”ËœDid You Ever See A Dream Walking’ and ”ËœWon’t You Come On Back’.
The booklet, written by Brian Nevill, is packed with excellent pictures, advertising of the era and detailed info, and is a fetching companion to the previous volumes and completes the set.Fats Domino is one of the last of the original and truly great surviving rock’n’roll figures. His towering talent and genius endures down the decades. Pick any one of the five Ace Imperial singles compilations for the hard evidence and a rollicking good time into the bargain. 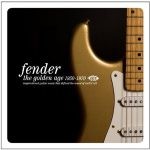 Subtitled ”ËœInspirational guitar music that defined the sound of rock ”Ëœn’ roll’, this compilation, based upon Martin Kelly’s book Fender ”â€œ The Golden Age 1950-1970,commemorates American inventor Leo Fender’s outstanding contribution to the sound of contemporary music. As Kelly proclaims in the notes for his compiled CD: “The pop music explosion of the 1950s and 60s would not have happened without the electric guitar and, perhaps more importantly, the electric bass.”Â

You might not be readablyable to pick out a Fender guitar ina certain recording, but Martin Kelly sure as hell can and he has selected a broad, chronological selection of crucial cuts, from various musical genres, that trace the evolution of the distinctive Fender sound.
Kelly’s journey begins with thebuzzing twangingwestern swing of Bob Wills and his Texas Playboys’ ”ËœBoot Heel Drag’ (1950, with Herb Remington on Fender Custom steel guitar) and Tennessee Ernie Ford’s jumping ”ËœCatfish Boogie’ (1953). The late, great Ike Turner gives the Stratocaster a real work out on a medley of ”ËœFeelin’ Good /Please Love Me’, while Luther Perkins helps to define the sound of the prodigious Johnny Cash, with his Esquire guitar on the original version of ”ËœFolsom Prison Blues’.
Subsequent tracks include many stone cold rock ”Ëœn’ roll classics ”â€œ Dale Hawkins’ ”ËœSusie-Q’ (featuring James Burton on Telecaster), The Kingsmen’s ”ËœLouie Louie’, The Bobby Fuller Four’s interpretation of The Crickets’ ”ËœI Fought The Law’ (later covered by The Clash) and Ronnie Hawkins’ no holds barred assault upon Bo Diddley’s ”ËœWho Do You Love’ (Robbie Robertson on Telecaster).
Guitar-led instrumentals are obviously essential for this type of compilation and Fender ”â€œ The Golden Age does not disappoint including ”ËœWalk ”â€œ Don’t Run’ by The Ventures, Dick Dale’s frantic version of ”ËœMiserlou’, The Shadows’ ”ËœWonderful Land’ and former lynchpin Shadow Jet Harris playing the celebrated Fender bass on his 1962 version of ”ËœBesame Mucho’.
As mirrored by the numerous entertainingNashville-recorded Fender jingles on this CD, country music was always dominated by the guitar sounds of Fender. Buck Owens & the Buckaroos’ 1965 ”ËœBuckaroo’ sports a Fender electric, a Fender Jazz bass and a FenderKing acoustic too boot.
With Booker T & The MGs’ ”ËœGreen Onions’, Otis Redding’s ”ËœRock Me Baby’ (with Duck Dunn on Fender Precision Bass) and Sterling Morrison playing Electric XII 12 string guitar on The Velvet Underground’s 1969 ”ËœBeginning to See The Light’, Fender ”â€œ The Golden Age makes you truly appreciate how much you love the sound of Leo Fender’s glorious invention. The twang is still the thang. 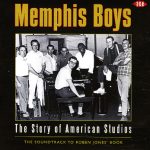 An incredible complication, which acts as the aural counterpart to the recent book ‘Memphis Boys’, Roben Jones’ essential history of American Studios – a pokey little studio on Thomas Street, Memphis that produced a slew of unforgettable, hits.

Established by songwriter-producer Chips Moman and his business partner Don Crews during 1964, it took some years for American Studios to develop its sound but once the in-house group of key musicians (the Memphis Boys of Roben’s book title) were all in place the archetypalclassic tunes kept coming. Thanks to those players (bassist Tommy Cogbill, guitaristReggie Young, keyboardist Bobby Emmons, drummer Gene Chrisman and others) the American Studios sound became as important to recording history as that which originated from the studios of Motown, FAME and other Memphis recording studios Stax, Hi and Sun.
Complied by Jones, John Browen and Tony Rounce, Memphis Boys is overflowing with the rich soul, country, gospel, R&B and pop sounds that defined American.
The first huge 1967 hits recorded at American (The House that Chips Built) are featured here: James & Bobby Purify’s exuberant cover of the legendary Andre Williams’ ”ËœShake A Tail Feather’, Oscar Toney Jr’s soulful ”ËœFor Your Precious Love’ and The Box Tops ”ËœThe Letter’, one of the biggest hits of the year and American’s first international smash, sung by a teenage Alex Chilton.
And the hits kept coming, many featured here; King Curtis’ grooving ”ËœMemphis Soul Stew’, Dusty Springfield’s ”ËœSon-Of-A Preacher Man’ (included on her seminal American recorded LP, Dusty In Memphis), Joe Tex’s party record ”ËœSkinny Legs And All’, Arthur Conley’s ”ËœFunky Street’, Joe Simon’s jailhouse chain gang soul drama ”ËœNine Pound Steel’.

Elvis Presley recorded arguably his most artistically satisfyingalbum of career at From Elvis In Memphis at American (1969); his magisterial cover of Hank Snow’s ”ËœI’m Moving On’ is included here, as is Mark James’ original 1968 version of ”ËœSuspicious Minds’, covered by The King in 1969.
A possible second volume is on the cards, but for now Memphis Boys: The Story Of American Studios covers much of the saga with style and substance. 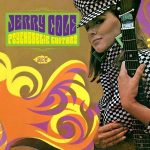 Guitarist Jerry Cole is memorably described by Psychedelic Guitars’ compiler Mike Vernon as“a space age, soul-surfin’, hot roddin’, go-goin’, blues-pickin’ psychedelic ranger if there ever was one.”Â Ace’s third collection of Jerry Cole’s 1960s recordings for the Crown and Custom labels goes a long way to backing up Vernon’s fulsome praise.
Hot Rod Twangin’, the first CD in Ace’s series, showcased some of Jerry’s early R&B work as Billy Boyd and tracks from his hot rod-themed LPs of the mid-60s. The second volume, Guitars A Go Go, showed Cole playing some brutal disco-fuelled guitar playing.Psychedelic Guitarstells the tale of how when America was tuning in and dropping out at the whim of Timothy Leary, the Crown label turned to Jerry Cole catch some profitable musical psychotropic action. It was at this time that Crown launched Custom Records, the label on which Cole’s six psychedelic albums were released.
Recorded under various monikers, including The Projection Company, T Swift & The Electric Bag and The Stone Canyon Rock Group, Jerry Cole’s predominately instrumental records are a strange but invigorating blend of Davie Allan & The Arrows movie biker guitar rock, 60s Link Wray raunch and twisted late 1960s loungecore music. The result approaches the realm of cocktail music for swingin’ armchair bikers. Among the numerous highlights are T Swift & The Electric Bag’s exploration of Hendrix’s ”ËœAre You Experienced’ (the CD begins with blistering instrumental ”ËœOur Man Hendrix’ by The Generation Gap), the rockin’ ”ËœWild Times’ by The Stone Canyon Rock Group, the trippy ”ËœKimeaa’ by The Projection Company and flat out stoner rocker ”ËœFool’s Luck’ by The Generation Gap.
Coupled with creditable covers of The Spencer Davis Group’s ”ËœGive Me Some Lovin” (The Projection Company) and Jimmy Webb’s ”ËœMacArthur Park’ (The Stone Canyon Rock Group, featuring a groovy sax solo), Jerry Cole’s freewheeling Psychedelic Guitars is a blast. The LP covers are something to marvel at too.