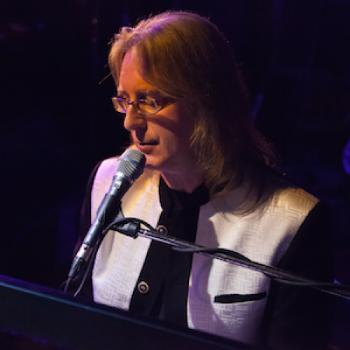 When John Howard’s 1975 album Kid In A Big World was reissued to wide acclaim in 2003, it marked his return to writing and recording after twenty years of silence. Since then John has recorded new material for various labels, including his much-admired 2005 release, As I Was Saying and the internationally-feted 2015 album John Howard & The Night Mail. He has now settled comfortably with Occultation for what will hopefully be a long-term residency. Recorded over a twelve-month period, Across The Door Sill features many-layered pianos and vocals. Whereas John Howard & The Night Mail was a “band album”, Door Sill is very much a solo work. With five brand-new songs investigating the process of dreams and how one can imagine crossing previously-unseen thresholds, embarking on new adventures and challenges, through differing timelines, the album was inspired by 13th Century poet Rumi’s Quatrains and is viewed by John as his most challenging release yet. One can hear the influence of John’s own songwriter heroes – Laura Nyro and Roy Harper in particular – with its long-form, languidly organic compositions and eschewal of the usual verse/chorus/middle-eight song structure. “An album that will take a few listens, I think,” says John.

Across the Door Sill by John Howard is available on vinyl, CD and download from Occultation Recordings