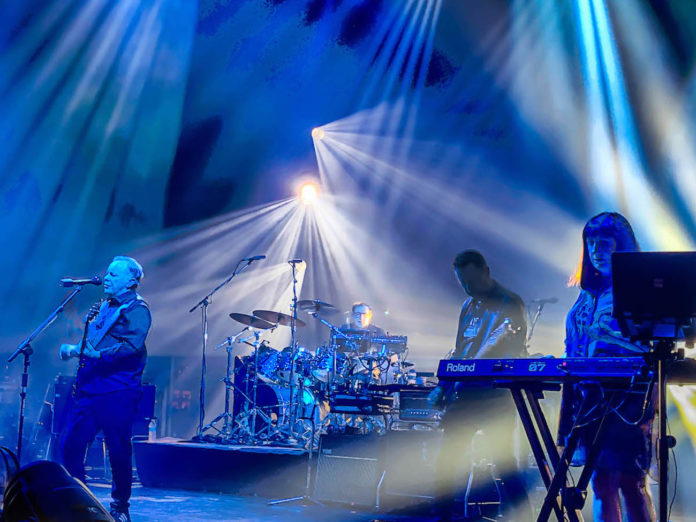 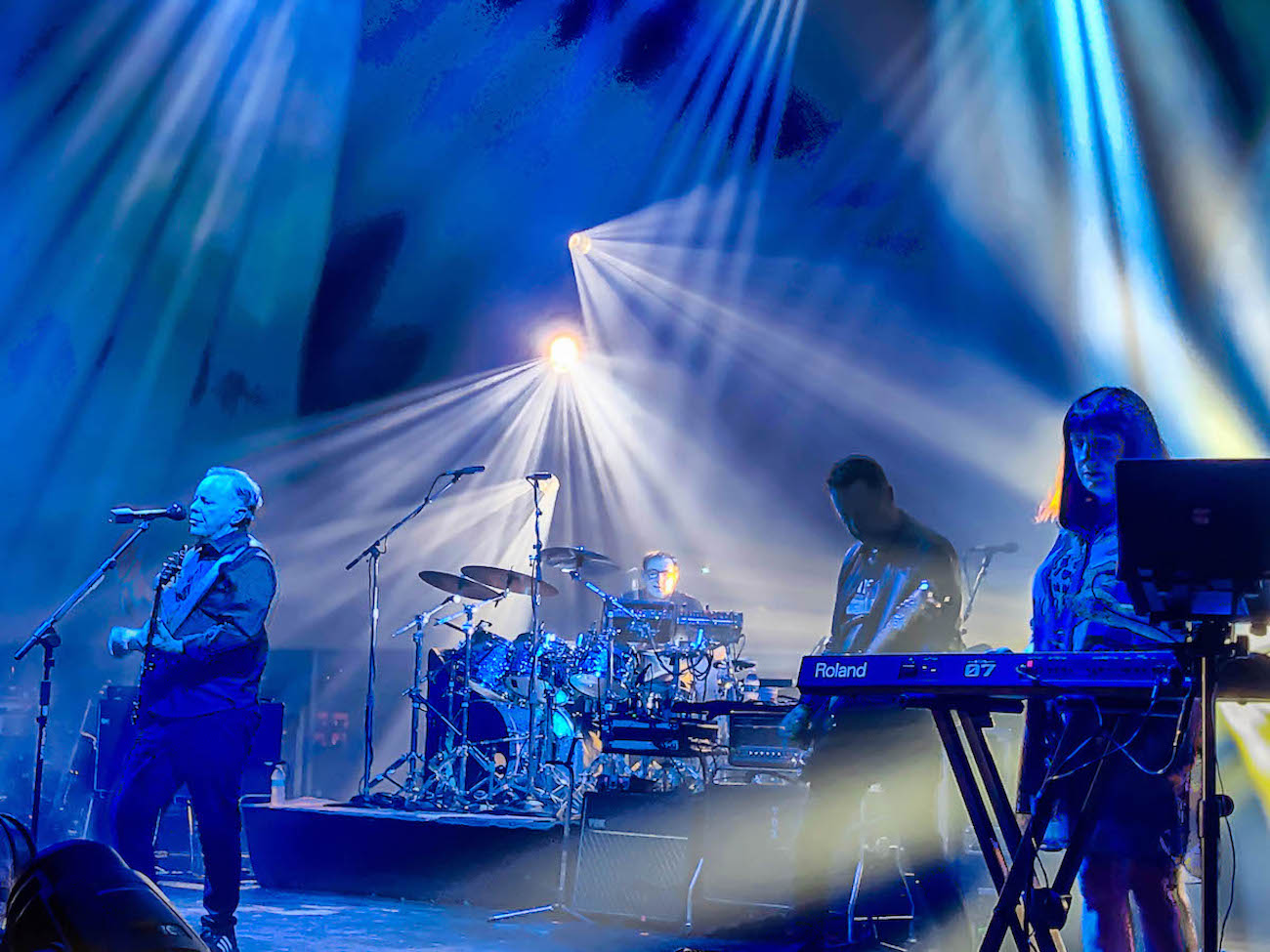 When a band like New Order plans a multi-day residency, it evokes the passage of time: the hours on stage becoming sequential nights, looking back to all the years. Five days passed in Miami Beach, with performances on four nights at the historic Fillmore. Each evening featured a new setlist highlighting some of the band’s most-adored songs. Of course, these themes of passing time lurk across the catalogues of New Order and Joy Division: “Blue Monday,” “Age of Consent,” “Fine Time,” “1963,” “Decades.” In its earliest incarnation, the band was advertised in the past tense: New Order were Joy Division. In these first shows of 2020, the band indulged in its own nostalgia while keeping its finger on the pulse of the present.

On the first night, the band worked backwards from the twenty-first century, leading off with “Who’s Joe?” before moving into “Dream Attack” and Joy Division’s “Disorder.” The following nights, the band opened by taking its fans through the decades. On Friday, an opening trio of “Age of Consent,” “Ceremony,” and “Transmission” sparked a collective memory in the crowd: we’re watching the band that defined Factory Records. Taking the stage on the final night of the residency, Bernard struck a whimsical tone: “We’re going to have some fun tonight. Let’s have some Regrets” (cue the iconic opening chords of “Regret”).

Seeing New Order is a multi-sensory experience. Drawing on the band’s long-standing collaborations with designers like Peter Saville and Trevor Key, the residency featured a carefully crafted video backdrop that reflected New Order’s legacy of fusing sound with visual art and graphic design. Each night, a cinematic assemblage—a music video for each song—invited the audience to listen in time. “Your Silent Face” began with a birds-eye-view shot of waves crashing, which dissolved into a rapid zoom-out to satellite images of earth. Audience members at once see New Order against the vast scale of the universe while recognizing that the performance is simply a rapturous blip on the radar of time.

For stretches each night, this experience transported the audience from a marquee show in Miami to a discotheque thirty years earlier. The band’s dance club hits are the setlists’ center of gravity. On the last two nights, the middle of “Sub-culture” alights a glorious switch, and the Fillmore—wrapped in pulsing rhythm and lights—transforms into a bouncing Haçienda that no longer exists. On Friday, the band rides this rave-wave into “Bizarre Love Triangle,” and the Fillmore seems lost in the throes, from the pits to the top of the mezzanine. The Miami residency seems especially keyed to New Order’s acid-house DNA. The South Beach heat—even in the depths of winter—echoes the space of Ibiza, where the band recorded much of Technique. That album’s release saw New Order’s first live performance in Miami back in 1989. Before unleashing the first notes of “Fine Time” (a song that only recently reappeared in the band’s live repertoire), Sumner reminisced, “This is a song we wrote a long time ago, in Ibiza.”

The nostalgia reaches a peak during “Temptation,” the closing song of the set on each of the four nights. Behind the band, a video of the open road plays as New Order invites the audience along for the ride. As the crowd euphorically belts out the song’s refrain, the images underscore the sensation of dashing into an ever-present future.

This sonic transportation is made possible by New Order’s undeniably professional approach on stage. Stephen Morris’s wild yet precise percussion and Gillian Gilbert’s ever-expanding synths create a sound so big you could live in it. Meanwhile, Phil Cunningham and Tom Chapman relay tightly fitted layers of guitar and bass from either end of the stage. Bernard plays the consummate frontman, trading off guitar and microphone (and melodica). His voice—and his feet—dance lightly across both the sad reminiscences of “Ceremony” and the angst of “Blue Monday.” He gratefully soaks in the crowd, thanking them profusely, even bravely handing the microphone into the front row on a few songs. Through it all, the band remains unflappably cool. At one point, a stagehand enters discreetly to place a refilled champagne flute on Gillian’s synth. 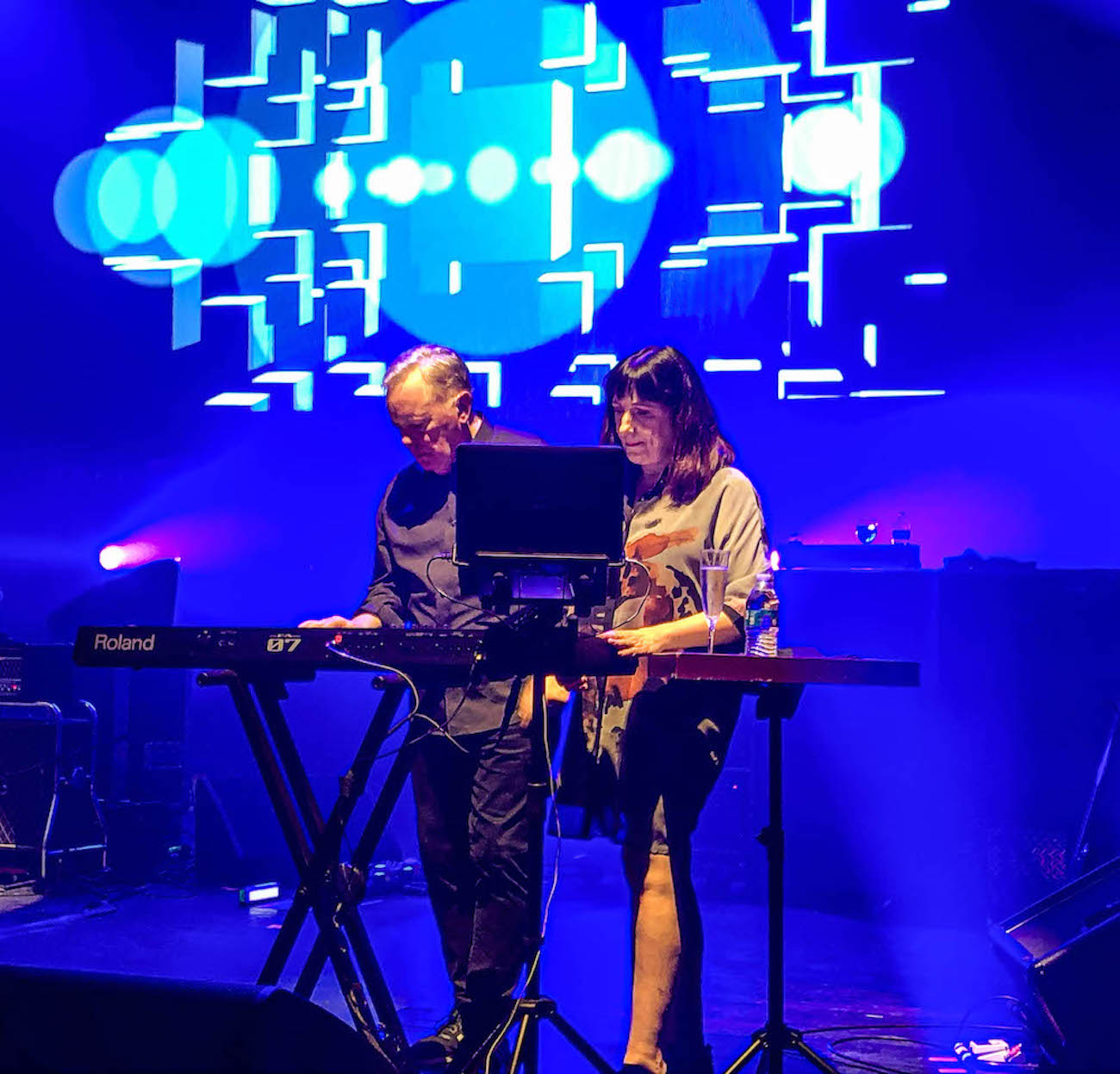 The passage of time seems most palpable when the band plays Joy Division. Each time New Order performs “Atmosphere,” Anton Corbijn’s 1988 music video appears, with small hooded figures carrying larger-than-life images of Ian Curtis across the screen. Yet the residency’s “Decades” performances are the ones that linger. Pixillated photographs of Ian Curtis, ghostlike, fade and reappear behind the band, haunting them. Bernard sings to the crowd, “Where have they been?” Instead of conjuring the deep notes of Curtis’s voice that speak rhetorically to an unknown, Bernard seems to be asking of Ian, where have you been? The performance turns inward for those brief moments as the audience reflects on the band’s origins, all it lost, and everything it has gained.

In their 40 years as New Order, the band has created a universe of its own, and the residency offers a chance to revel in it. Graphics from Technique accompany sounds from Music Complete as images referencing Peter Saville’s “cherub” and “Little Lewey” dance across the screen while the band plays “Tutti Frutti.” “Love Will Tear Us Apart” closes out each night’s encore with a flickering tableau of Joy Division and New Order album sleeves. An Ideal for Living begins the montage, which moves forward along the band’s timeline to graphics for “1963” and “Regret.” Spiralling backwards in time, record covers for “Temptation” and “Atmosphere” appear onscreen. It ends with the spinning Factory Records label for the “Love Will Tear Us Apart” single (FAC 23), as if it all came down to this.

The Miami residency was a celebration of New Order’s journey and of all the fans along for the ride. But at its heart, it asked us all to ‘go out and have some fun.’ As Bernard put it on the final evening: “It’s Saturday night—let’s have a party.”

Audrey J. Golden is a literature and film professor at Simmons University. She and her Factory Records collection live in Brooklyn, NY. You can follow her on Twitter and Instagram, and you can check out her personal website to learn more about her writing and her archive of books, records, and ephemera.

Evan D. McCormick is a historian at Columbia University. Based in Brooklyn, he writes about music in time, and can be followed on Twitter or Instagram.