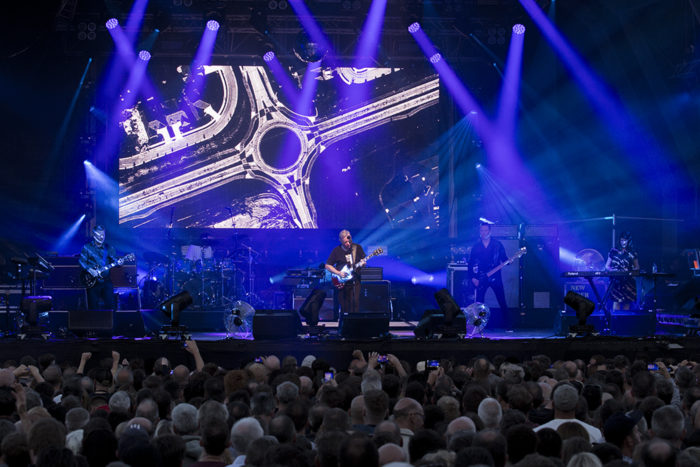 New Order evoke the past and present in a blinding show on Bristol’s dockside, Elfyn Griffith gets emotionally involved, Michael Brumby takes the shots.

The opening to this much anticipated New Order appearance in Bristol tonight is grand: Wagner’s Vorspiel from Das Rheingold builds up and up as a collage of old bathing acrobatics is projected on the huge screen at the back of the stage. On troop the Mancs at its crescendo and dive straight into a spirited muscular Singularity from their last album Music Complete, the images on the backdrop switching to a breakneck and breathtaking montage of 80s Berlin punk and decadence.

Breathtaking too is how much of tonight can be described in fact. New Order are on form, on top form, from the off. Restless from the same album follows and then the first of a Joy Division section with She’s Lost Control and Shadowplay from the first album Unknown Pleasures and their debut single, 1979’s Transmission.

It’s 40 years since Unknown Pleasures was released, so the dedication is heartfelt and performed to an unerringly perfect quality, with the flailing limbs of Ian Curtis’s staccato dance and his haunting vocals missing. Bernard Sumner’s vocals may not be his strongest point but they do the job well here, as does his guitar playing, and Stephen Morris’s drumming is a wonder to behold, a rhythmic machine of its own device.

Of course, Sumner and Morris are the only two left of Joy Division in New Order, and the legs apart, low-slung, deep bass rhythmic throb of Peter Hook is sadly missed. If there’s one thing to complain about tonight it is that Hooky’s replacement Tom Chapman’s bass is, bafflingly, not turned up loud enough for much of the set. The other new member, guitarist Phil Cunningham, complements Sumners’ own style and even allows him to take up the mic sans-guitar on a few numbers. 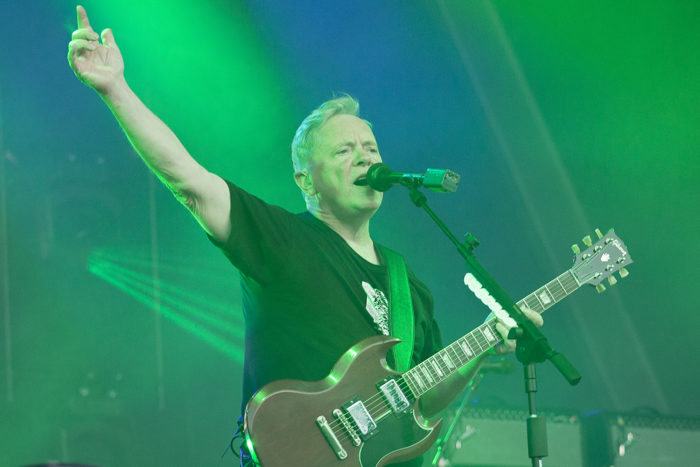 In-keeping with the sublime emotion, the “eerie spatiality”, as Sumner once described it, of Joy Division’s sound, Your Silent Face from New Order’s 1983 album Power Corruption & Lies, with Sumner’s own haunting melodica intro, brings to an end that period of post-JD magnificent miserabilism if you like. Tutti Frutti (although from the latest album) heralded a big chunk of house and dance music, showcasing how New Order, the purveyors of guitar, synth and bass-powered dancefloor dynamic, rode the dance revolution from the States in the 80s and 90s and beyond. 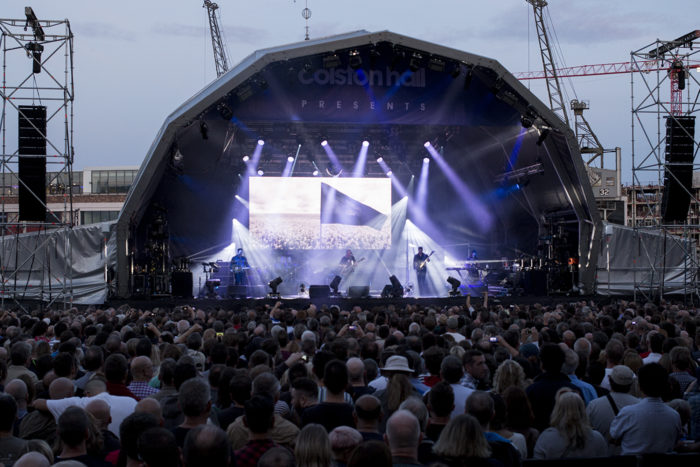 True Faith draws the crowd into a mass singalong before the familiar opening chords of Blue Monday and the bass actually flexes its muscles for once, before bizarrely getting immersed in the synth and guitar once again (oh Hooky where art thou…?), Sumner joining the poised and unfazed Gillian Gilbert on synths to close out the track.

Last number Temptation from New Orders’ first album Movement is pure guitar-chiming, melodic, transcendental brilliance. And then for an encore, as ghostly images of Ian Curtis float on the backscreen, Joy Division’s Decades and Love Will Tear Us Apart wash over us emotionally and timelessly.

‘Forever Joy Division’ reads the letters on the screen, and that evocative sound – which is so deeply immersed in New Order’s music, whatever other styles they’ve embraced, and which has affected and influenced so many – lives on.

Please note: Use of these images in any form without permission is illegal. If you wish to use/purchase or licence any images please contact Michael Brumby at mbrumby@hotmail.com