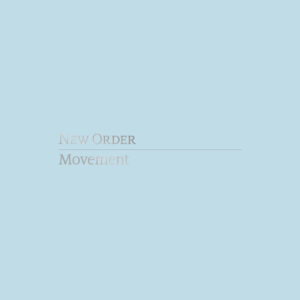 New Order celebrate their debut album with the full bells and whistles box-set treatment. Simon Tucker looks back at an album that’s often overlooked and searches to see if its reputation is justified.

Movement resides in an odd part of the story of modern rock music.

It is a debut album by a band already two albums in with the only changes being their name, the introduction of another member and a change in singer.

It is of course this last fact that is the most important.

This change was not one taken by the band members (Stephen Morris, Bernard Sumner, Peter Hook) in the name of creative change. It was forced on them by the sudden death of their lead singer, and far more importantly, their friend Ian Curtis.

They were Joy Division and now overnight they were not.

That sudden rip out of their lives leaves a vacuum, a lonely place. Emotions were firing through the band, their circle of friends and anyone involved in their creative process which includes Movement’s producer Martin Hannett. This must have been a hugely confusing time for everyone so what do they do? They go back to work like many of us do after a loss. We humans in the West are excellent at burying our feelings and sticking on that plastic facade to carry on regardless. Every one of us who has lost someone has had to go back to work and for Sumner, Morris, and Hook their work was creating music. It was what they knew and what they were good at.

The name had to change of course. Joy Division without Ian Curtis? It would never have worked and the band had the vision to know this. They become New Order (once more bringing to mind fascism for a few journalists…they never did help themselves) and they did what they know best..they write songs.

This leads to the first part of reevaluating Movement and its place in the New Order oeuvre. You can look back at press cuttings from the time or see a few fans who have been with the band since the beginning and you will often see the accusation that Movement is “to much like Joy Division”. Well of course it is. It was created by 3/4’s of that band and had the same producer. This accusation is lazy and not really understanding of Movement’s very creation. Sumner, Morris and Hook had been honing their skills as songwriters and musicians for a few years by the time we get to this point. They were tour hardened and experienced. They were vital components in what had made Joy Division such a special band. Yes they had in Curtis a mercurial and iconic frontman  / lyricist who, as they themselves would admit, would help guide the band in making certain creative choices with their songs but he was but one part of the seminal whole. The loss of Curtis and the subsequent myth building which ignored the true tragedy of his death and its effects on those around him helped overshadow the others contribution to the greatness of Joy Division. There are other bands (AC/DC, Pink Floyd) that have had to adapt to the leaving of a singer in a tragic way and whilst they didn’t change their name neither of these bands suddenly changed their sound. Instead they felt their way through it eventually blossoming into a complete unit as celebrated as their original incarnation.

Before getting to Movement the band already had a fantastic springboard in the two songs Ian did with the band, Ceremony and In A Lonely Place. Both of these songs would go on to be revered among the New Order fanbase and they both serve as a beautiful goodbye to the past and a hello to the future. In A Lonely Place serves as the last true Joy Division song in feel and structure. It is an elegiac beauty and devastatingly powerful. Ceremony on the other hand introduces us to the birthing of a new band, one birthed by their original incarnation…a parting gift from a friend soon to travel away. You would probably be aware of the Joy Division version of Ceremony with Curtis’ ragged vocals but here we get two versions with some distinct differences. The first version is the sound of a band finding their place within the song, working out structures and pacing. The second version (1st Mix – Ceremony Sessions) is a far more is a far more promising and fulfilling listen with Gillian Gillbert now in the band rounding out the sound and Sumner far more confident in his vocals which must be in partly due to the fact they had managed to properly decipher Curtis’ lyrics. This version is where you hear New Order really start to claim this song as their own and snatch victory from the jaws of defeat.

In life time can move so fast and it is the speed that leads us on to the second step of understanding Movement and its hidden merits and obvious flaws.

Joy Division were famously due to fly to America for their first tour of the States when Curtis took his own life on the 18th May 1980. Movement was recorded in under a years time from this event. Looking back at that now it may seem absurd that these young people would suffer such a loss and then be creating a complete work in that time frame. The band also managed to go to America as they had planned to do only a few months later with a concert from the 27th September of 1980 being part of the DVD that comes with this edition. Admittedly this pace is an obvious sign that band, manager, label were all burying their grief in what could be seen now as unhealthy but it is a vital element in giving the band the belief they could carry on with each other and continue their artistic path. The live footage also shows why they made the right decision in having Stephen not be the lead singer (sorry Stephen).

Revisiting Movement now reveals certain truths. The most important of which being that for all of the negative press it received it is actually a clutch of very strong songs. The band were still capable of pushing forward with their song-writing without the ear or lyricism of Curtis. The introduction of Gillian into the band is another masterstroke and you can hear her influence on the band on the songs after her appointment in the way they add layers of melody and warming atmosphere. There are truly great New Order moments scattered throughout Movement whether that be the deep post-punk funk of Senses, the tribal march of ICB (which contains that thrilling pace change led by Morris’ drumming), and the Gothic majesty of The Him a song in which you hear the upper lip/carry on attitude of Sumner fall away as he sings, in what is the most beautifully honest moment of the album, “I’m so tired, I’m so tired”. One of the single most important truths that becomes apparent is that most of the negative thoughts surrounding it are down in a large part to Martin Hannett’s production.

By the time the band had got into the studio with Hannett their relationship was on the rocks. Hannett was in a court case with Factory Records and was descending further into drug and alcohol abuse, however,  it is important to remember that Hannett was himself dealing with the loss of Curtis. Martin and Ian had created a strong relationship and his death affected him badly so when we get to Movement you hear a producer who was once so sure of himself now retreating backwards in many ways. The production on Movement doesn’t contain any of the grandiose beauty of Closer or the spatial Manchester atmosphere of Unknown Pleasures. Instead it is brittle and thin with the band and producer seemingly muddled on how the finished record should sound. This is where the criticism of the album seems to stem from and whilst factual it is slightly unfair and ignores the fact that what exists is still a strong collection of songs.

With this reissue comes the obligatory extras and for once this is a case of them being well worthwhile as you can hear the band in their truest form before the production and mixing helped dampen the effect of some of the songs. Senses (Cargo demo) still pulses and shimmies with its DNA being untouchable, Homage (Western Works demo) giving us further proof that in Stephen Morris the UK had a drummer that could match the ingenuity of Jacki Liebezeit and Cries and Whispers (Cargo Demo) sounds gloriously sloppy but further proof that the band will soon fully arrive at the sound that would become so influential. There’s more of course and all of it including the DVD and extras are essential for any New Order fan but the single most important extra is the Temptation (Alternative 7″ mix). This is the song where the shackles were off and the band began their imperious phase.

Movement ‘Definitive Edition’ serves as a timely reminder of what an important album it actually is. With the original classic Peter Saville sleeve moving away from the Gothic overtones of Unknown Pleasures and Closer and allowing some light, sunny blues into the palette you get an image that perfectly matches the music inside with it feeling abstract yet containing slight slithers of sunshine in. Movement is an essential part of the New Order story. It is a batch of good songs which are not that far removed for their highly revered siblings on the following Power, Corruption & Lies. Yes it is not perfect and there are obvious faults but what you are hearing with Movement is the sound of a band bravely baby-stepping their way into a new artistic life and for that reason alone it is an album that should be celebrated.