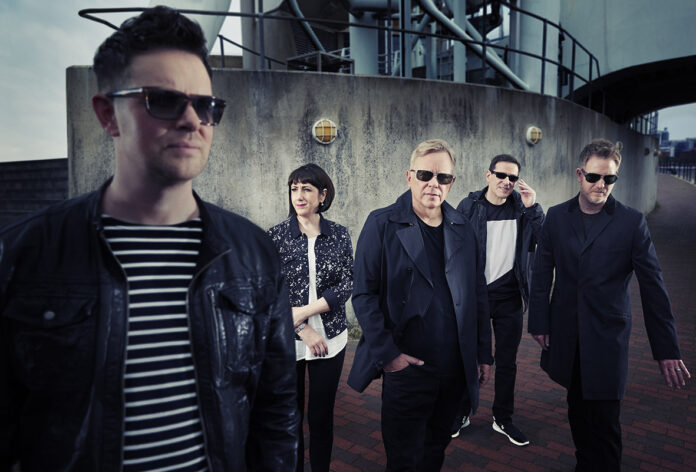 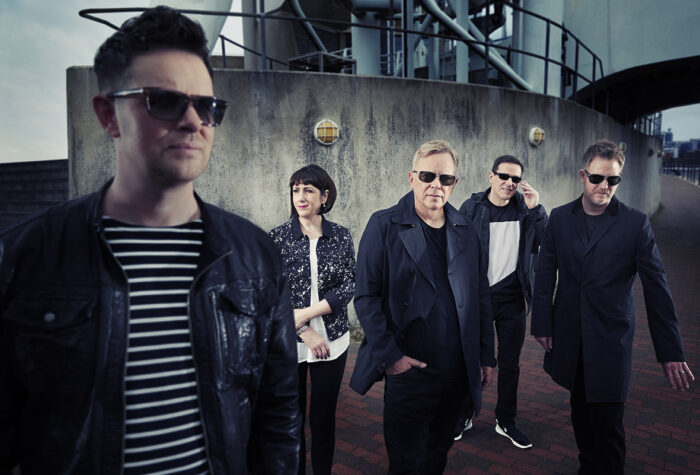 New Order make a triumphant return to Manchester. LTW boss and Membranes frontman was there to celebrate their ‘brooding perfect pop’

An overcast grey sky on a brooding yet oppressively warm and sticky evening, is of course, the perfect backdrop.

Melancholic midsummer pop doesn’t come any finer than New Order and the band, who are several decades into a long and tumultuous but creatively perfect career, have honed down their electronic pop into a finely distilled perfection.

A home town gig is always going to be something special which Bernard acknowledges before pointing out that he is from Salford which is about 100 yards away from here but could sometimes feel like 100 miles as he quips, ‘It’s good to be back in Manchester. Best city in the world – after Salford. Where I’m from. People just tend to be a bit more earthy from Salford…’

It’s that earthiness and yet glacial pop coolness that, when perfectly distilled and combined like here, that creates the core of what New Order are so good at. This is also a band that has been dealing with its well documented history for ever – few bands can have so much creative and emotional baggage to deal with and yet seem steeped in and detached from it at the same time.

The 2016 New Order is a very different beast from the one we saw play at Blackpool on Sept 5th 1980 – their third gig after the gutting suicide of Ian Curtis. Then the band were blinking in the headlights – the shock of Ian’s then recent death was still palpable and the band was numbed and finding their way. The echo of Joy Division still hung heavy over their set with the bass driven songs still dominating as they seeked that new direction that they had been hinting at at the end of Ian’s life and had been toying with on July 27th the previous year when JD had played Blackpool.

New Order in 2016 is a distant echo from these early explorations. For a start there is the still unresolved break up with the bass viking, Peter Hook, that still rumbles on. We don’t want to take sides here – we thoroughly enjoy Hooky’s sets and his company having seen him a lot in his post New Order phase and have to put this all down to two parties dealing with their fallout and history in their own ways. Maybe, as one of the hardcore New Order fans points out, you get double your money with both parties out there playing and both doing dealing with the legacy in their own idiosyncratic ways.

Of course it would be better if everyone could share the stage but these fall outs are very understandable and what would a Manchester band be without fallouts, bust ups and musical divorces? rarely does a band come out of this city without a deep and dark split – the Smiths, the Roses, the Inspirals and for godsake the masters of it all The Fall all display a Mancunian trait for the bitter fallout. What we, the humble fans , have to deal with is what’s left.

The Barney led New Order are, of course as we were saying, a very different affair from that band I saw in Blackpool all those years ago. At the time they were every very much a John Peel underground band, albeit one of the verge of greatness and with a big expectation to somehow bridge the gap between underground art rock and the charts that Joy Division had posthumously managed to pull off with Love Will Tear Us Apart.

Since then this has been the story of New Order and even at the fumbling early gig there were hints of the pop grace that they would make their own. These days they are very much a pop machine. This is a slick show – an exercise in perfectly staged glacial perfection with a backdrop made up of the band’s videos and films that very adds to the music. This is the band that soundtracks the rise of Manchester from it’s post punk experimentation in the ruins of the post industrial city to its clubland boom built around their own Hacienda to its current European megapolis – a city that reinvade itself through music and the heart of that music is perhaps New Order themselves.

Barney’s voice adds the human to the machine as the well drilled five piece band – still with Gillian and Stephen of course being the engine room, make sound huge and technologically perfect like on Tutti Frutti from the current album – a melancholic electronic club anthem of the kind of pop the patented when they hit their stride. Songs like this link that old Manchester of Joy Division and the rainy day post punk post industrial brooding with the brash and bold new Manchester of endless neon bars and Saturday night partying – somehow New Order slot into both worlds and that has always been their best trick – that seamless omnipresent soundtracking.

Far from a museum piece the band play several cuts from that recent triumphant top ten Complete Music album like the cards on the table opening, Singularity, which somehow manages to reference all the hallmarks of the long history from its neo Joy Division bass driven intro to its electro pop bubbling and its pure pop soaring chorus. They also deal with older hits like Regret and Crystal provoking mass singsongs from the mixed audience of scene vets, grizzled elder statesmen ravers, former match lads and their bouncing offspring and the atmosphere is euphoric. New Order’s perfect pristine pop sounds timeless and slips through the generations with ease, songs like Bizarre Love Triangle and Temptation sound eternal and its hard to believe the amount of time since they were first written. Perfect pop makes time stand still like on True Faith and New Order, at their best are masters of this.

The band are at their best when they find that space between their technology, bass driven melodies and delicate guitar lines and Bernard’s deceptively simple melodies sliding on top – making the profound out of the simple. Blue Monday still sounds delicious – the perfect combination of the human and the machine with its brooding soundscapes and intelligence and is a creative moment of perfection and still a perfectly realised piece that retains the echo of their former band in its aching bass line and the pop frailty of Bernard and New Order clashing beautifully with the sculpted electronics making it perhaps the most important release of its time. Temptation ends the set proper with another mass singalong and the band return with a mini tribute to a powerful Joy Division.

A stunning version of Joy Division’s Decades is the first encore – a song so steeped in mystery and melancholy that it would present many problems to a lesser band to pull off. They let the song breathe and ache with its mercurial sadness and the backdrop that switches to images of Ian Curtis is powerful and moving and a stark reminder of the great lost genius and those times when, literally two blocks of the city away in their Little Peter Street rehearsal room the song was written all those years ago.

The songs evocative starkness, gorgeous major to minor key melodica part and crucial bass line line hook (ahem) are perfectly played and the vocal captures that desolate sense of Ian Curtis as it echoes through the decades. It’s a real high point in the set and a reminder of just where this most perfect of pop bands came from and broods the audience into a stunned standing in stark admiration.

Of course they end with Love Will Tear Us Apart that sees a break out of terrace anthem singalong – a joyous mass celebration of an introverted song – an interesting yet perfectly apposite pop response.

Decades
Love Will Tear US Apart