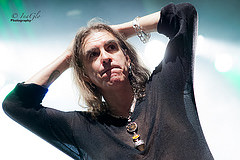 New Model Army, veterans of a 30+ year journey of musical change and discovery hit Warrington’s Parr Hall and Pyramid venue on their second leg of the Between Dog and Wolf European tour.

Unfortunately their drummer Michael Dean couldn’t start this leg of the tour due to medical complications arising from a recent operation on one of his legs, so in typical show must go on fashion his shoes were filled by Adam & The Antz drummer Andy Woodard. And filled in fine fashion they were too.

New Model Army’s latest album ‘Between Dog and Wolf’ is full to the brim with multi textured drumming and I for one was a little unsure how anyone other than Michael would cope with the intricate and often tribal drumming that runs through the new material, especially at short notice with little time to learn old classics never mind the new stuff. But Andy came through for NMA’s loyal band of followers and turned in a sterling performance.

The lights came up and the band came to the stage with an accordion version of the almost legendary “Vagabonds” playing in the background giving the guys time to gear up.! ! Justin and the rest of the boys hit the ground running with a track off the new album “Stormclouds” to get the crowd warmed up before launching into an old classic “No Rest” to really get the mosh pit moving.

Time seemed insignificant then as the boys took the faithful on a musical roller coaster through the last 3 decades with old school anthems Christian Militia, No Pain and Whitecoats really getting the
crowd singing and dancing…Moshing IS dancing isn’t it ??? While other more sedate songs gave the crowd a chance to grab their breath, and as is customary for an NMA gig saw people climbing up on each other’s shoulders to perform a strangely hypnotic hand dance. I’ve been following the band since the late 80’s and I still watch in wonder as a shirtless bloke stands on his “brothers” shoulders and performs this almost ritualistic offering to the stage and I still have no idea how it all started either after all these years.

After the main set, the band took a few minutes out before coming back on for a 4 song encore featuring the fantastic “Green and Grey” and the for boding “Archway Towers”
It’s hard for me to pin down a favourite part of the gig, Marshall Gill’s skilful guitar work, Ceri Mongers driving bass lines or Dean’s keyboards intertwine seamlessly with those oh so heavy drums from Andy before being topped off with Justin’s delivery of those heartfelt lyrics.

Scroll through the photo album;

All in all, a great gig with many happy if exhausted faces heading off to drinks at the after gig gathering.