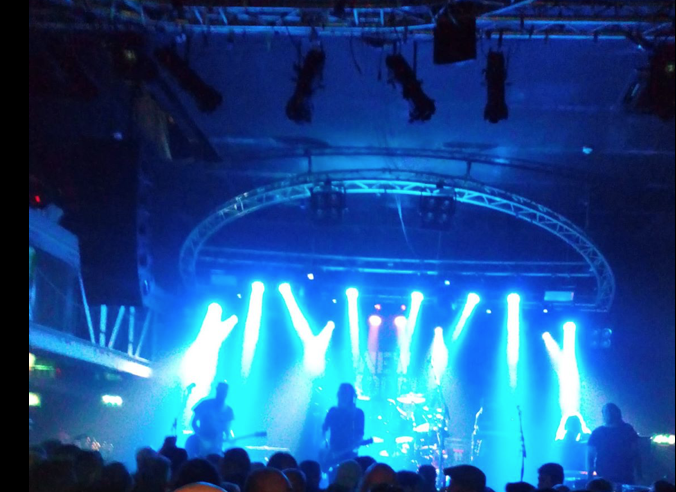 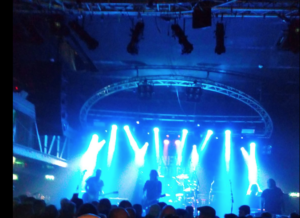 Not a Prefab Sprouter in sight. New Model Army still exist by virtue of Justin Sullivan’s omnipresence and perseverance, a constant in a changing dynamic. It’s pretty fundamental, with no Justin New Model Army could not exist.

Tonight in Glasgow on a late Autumn Friday night, the band roll into town to play at The Garage to service all their extremely loyal fan base. It’s a far cry from my last encounter with New Model Army in Glasgow, when they played the more sizeable Barrowlands. The hiatus has marked some small tweaks.  Time stops for no one, life’s trials and tribulations continue and that parallel universe of music runs side by side with us all. Music can resonate with us on different stratums.

New Model Army are an ultimate existential band. They have appeal and they appeal to us. Through the sociologically objective to the psychological subjectivism of introspection: Moving from the political protest to mind games of the self. Sullivan’s ability to articulate his thoughts shows an artist of some cerebral quality. This runs concurrently with the musical soundscapes that permeate tonight’s performance. The band’s presence and image mirror that of some fugitive Mad Max escapees.

The Garage is fairly packed for the boys from Bradford. There is something of a fever pitch audience, die-hards, long term aficionados and people who somehow share an intrinsic value in wanting to be here. I hear many English voices in the crowd who either live north of the border or have simply travelled. A further demonstration of loyalty.

The band take to the stage and open up with Stormclouds from their 2013 album Between Dog and Wolf. A song not designed to hit the ground running but rather a steady build up easing into the gig and getting that opening song under the belt. The drumcentric March in September continues the medium paced vibe up to this point. It is becoming clear that Justin has no intention of making this a “greatest hits” tour but focusing on the mellower vibe of the last two albums respectfully. Winter the title  track from the last album is played with a similar decorum as Justin swops that trusted Gibson SG for the lighter sound of his acoustic. But it’s innate melodic structure isn’t lost on us. It’s folk orientation works perfectly live. Believe It from The Love of Hopeless Causes with it’s drifting melody is delivered with precision and passion. As the crowd sway in some unison, some precariously on top of consenting shoulders. Adding to a sense where all people connect.

Born Feral with it’s tribal type drumming is one of many songs where we see bassist Ceri Monger swap his bass for a drum. It’s sparseness is not a hindrance but a paradigm of going back to basics. And a representation of their contemporary sound. We then take a trip back in time to No Rest, which is delivered with the expected gusto, arguably the most upbeat song of the set thus far. Ceri, as he has the hair, breaks into sporadic headbanging, rocking out to the beat as he often does throughout the set, while Marshall Gill rocks with his guitar in hand. This energises an already ecstatic crowd.

This is superseded by Purity, an old-school wonder, which Justin announces as the best song he’s written. I concur with that. It’s pop sensibilities and flowing keyboards, which may originally been a violin allows the melody to punch through the atmospherics of The Garage. Burn the Castle from the Winter album is the heaviest cut from that release. Commencing with a dark gothic-like vocal for each verse and exploding into an all-inclusive chant chorus inviting the audience to participate. It’s a great rendition of that album track. The first set is closed by What a Wonderful Way to Go from 1998’s Strange Brotherhood. Michael Dean’s prominent drumming is the prime mover for the song and everyone dances around that drum signature. As the band disappear into the ether of their own VIP stage area, the crowd show their appreciation and you get the impression that the band really did want to be here: It’s all by mutual consent. It inspires love and mutual respect and you sense that among all the strangers. There is a sense of humility in evidence.

The band return for a mini tri-set encore comprising of Guessing, Betcha and sandwiched into between that old chestnut and brilliant Poison Street. Where Ceri is giving it some with that trademark driving bass. My only minor criticism of the night is a sometimes ropey PA, where the vocals are lost and muddled from time to time. But for the most they are coherent not to undermine the show overall.

Tonight I’ve taken in rock, folk, new age, punk and gothic. Which demonstrates the band as being muiti-genred. To try and pigeonhole this evolving band would be an exercise in futility.