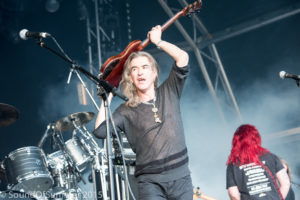 From the outset, there was a bigger buzz than usual for a dull mid-week November evening. The long narrow corridor of Brighton shoreline’s Concorde 2 venue was packed early on wall-to-wall with punters brimming with anticipation for a highly-recommended New Model Army gig on their ‘Winter’ album release tour.

Following NMA’s critically-acclaimed ‘Between Dog and Wolf’ released in 2013, this year’s follow-up ‘Winter’ has reached equal if not greater appeal. Just as well, as this lengthy tour across the UK and Europe leans heavily on the new material.
Mad Dog McCrea, NMA’s support on many of the legs of the UK journey provided ample support as a very apt and exciting warm-up with their tight brand of Celtic-folk-rock; helping to whip up the already-simmering, growing energy amongst the crowd and certainly got a few people jigging.

Justin Sullivan & co kicked off with ‘Burn the Castle’ to a furore of cheers and upraised arms and stormed through this track without pausing for breath following up with further new tracks ‘White Light’, ‘Winter’ and ‘Devil’, being played with passion and finesse and moreover a heartfelt and determined stance; you could feel it as a response and finger up to the current turbulent political and economic uncertainty. Indeed other stand-out tracks on ‘Winter’ such as ‘Born Feral’ and ‘Die Trying’ sounded pure and unflinching.

Just when you thought it couldn’t get any better, the ante’s further upped and a further dimension is added by the introduction of violinist Shir-Ran Yinon for a wonderful rendition of ‘Purity’ and the on-stage chemistry between her and Justin for the band’s first encore track ‘Vagabonds’ just fuels the electricity in the air further and further, more and more. But following ‘Purity’, the jubilant crowd was swept away into a whirlwind of frenetic energy for old favourites including the very appropriate-for-the-times ’51st State’ and ‘Christian Militia’ and ending the storming set with ‘ Wonderful Way To Go’. Plastic pint glasses, hair and limbs flying everywhere; bare torsos and shoulder towers all ‘twisting in our sweat!’

Of course, there would be at least one encore, as led by a stampeding front row and after the melodic harmony and bouncing camaraderie of ‘Vagabonds’ we were treated to the superb title track of previous album ‘Between Dog and Wolf’ before a fast and furious favourite ‘Poison Street’. The band took a much-needed breather and retreated briefly into the shadows before coming back on for the final encore ‘I Love the World.’

Whilst by now exhausted, you could see Justin was visibly delighted and humbled by the magnificent response; the tidal wave of pure electric emotion that comes only with being part of the New Model Army live experience. 2016, it seems shows their legacy is not ‘dead and gone’ but very alive, kicking and screaming in the 21st century. I love the World? We certainly did that night.