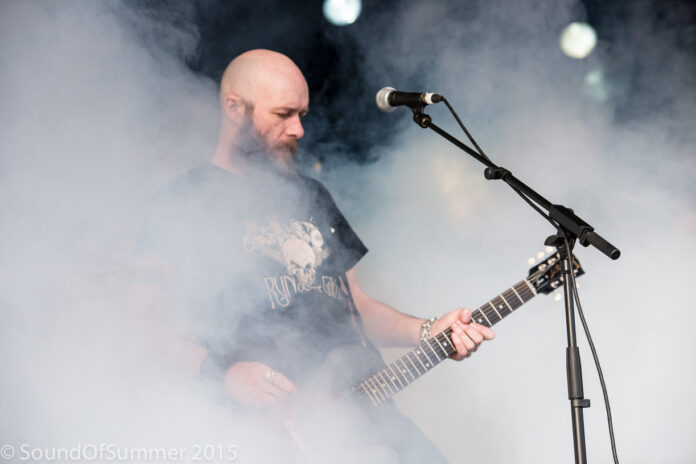 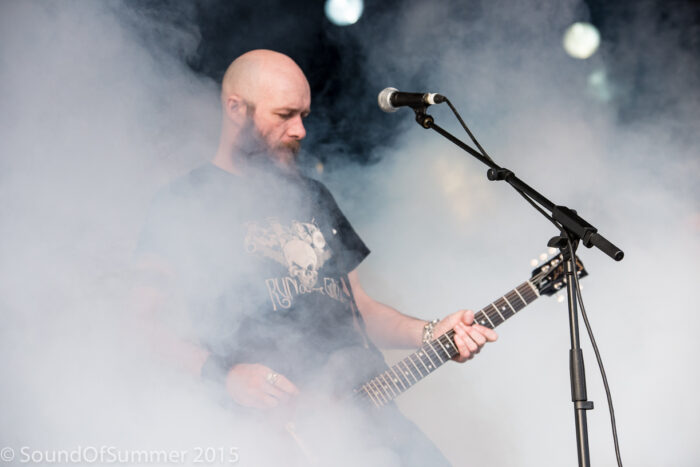 New Model Army make a return to Bearded Theory festival and produce a superb performance on a beautiful evening at a festival that just gets better and better.

It has been some time since I managed to attend a New Model Army gig.  I had booked tickets for the show at Rock City in December last year but sadly”man-flu” kept me at home.  I was therefore looking forward to seeing the band and to hearing how some of the newer songs worked out live at Bearded Theory.  I was not to be disappointed.

I was a little surprised to find that New Model Army were taking to the stage before Afro-Celt Sound System but in the event this simply added to the majesty of the performance.  The contrast between the Saturday evening this year and last could not have been more stark.  When Pop Will Eat Itself and The Wonderstuff took the main stage last year the rain was of biblical proportions, it was truly horrendous.  This year we were treated to a beautiful, warm and sunny late spring evening and the majority of the crowd gathered to pay homage to New Model Army were, like me, in shorts and T-shirts.  The setting was truly glorious and it set us up for a great performance.

I made sure I was side stage in plenty of time to grab a good spot for photographing the set.  It is perhaps indicative of the relationship that New Model Army have with their fans that security was very relaxed backstage.  Somewhat bizarrely I even found myself standing next to Marshall Gill in the backstage loo as we both grabbed some pre-show relief.  That is probably a little too much information.

It was apparent from the outset that Justin and the boys were bang on form as they hit the ground running performing with an intensity that seems to be so lacking in many of today’s younger bands.  After over 30 years as a band it is incredible to see how much energy, enthusiasm and effort bands like New Model Army put into their performances.  There is absolutely no sign of the type of ‘phoned in’ almost bored performances that seem to be the norm for some bands. 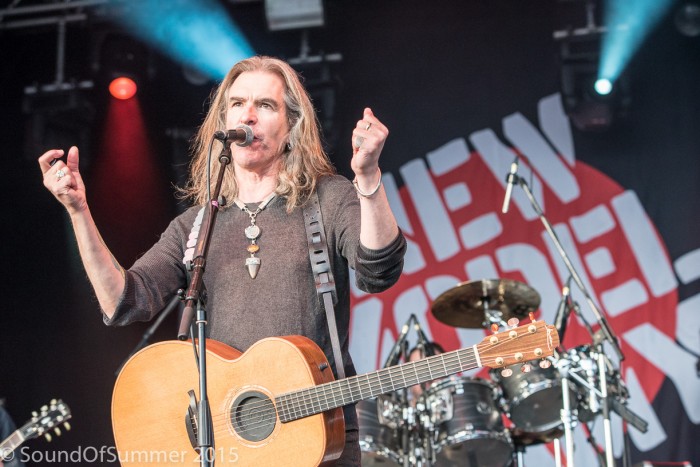 Justin’s eyes were ablaze with the intensity of his performance, Ceri’s long red hair was flying all over the place as he smashed into the high hat drums or crashed out the heavy bass-lines on his bass guitar.  At one point during the set Justin put his hands on his head and just stared at Ceri as he tuned his bass.  It was a look that said “you’ve had all day to do that”, you are holding me back.

After so long together there is an almost telepathic understanding between the band members of New Model Army.  They rarely put a foot wrong, they are tight and they perform with an intensity that makes the hairs on the back of your neck stand up.  I was too busy either taking photographs or jumping around to worry about writing out a set-list but if memory serves correctly the band opened with “Storm Clouds” a song that set the tone for the emotional rollercoaster that was to come.  They ripped through a set that included “Devil’s Bargain,” “Today is a Good Day,” “Knieval,” “Angry Planet,” and “Between Dog And Wolf” before finishing with “I Love The World” as the sun set to the front and right of the stage.

The setting sun painted the sky a beautiful golden orange as the crowd’s voice joined Justin’s shouting out the words of “I Love The World.” It really was a beautiful moment, one I will treasure for many years, one that really did top off a majestic New Model Army performance.  This was by some way my favourite performance of the weekend and one of the best New Model Army gigs I have ever seen.  Many of the New Model Army hardcore fans I spoke to afterwards agreed that it was a remarkable set, one that it was a real privilege to see. 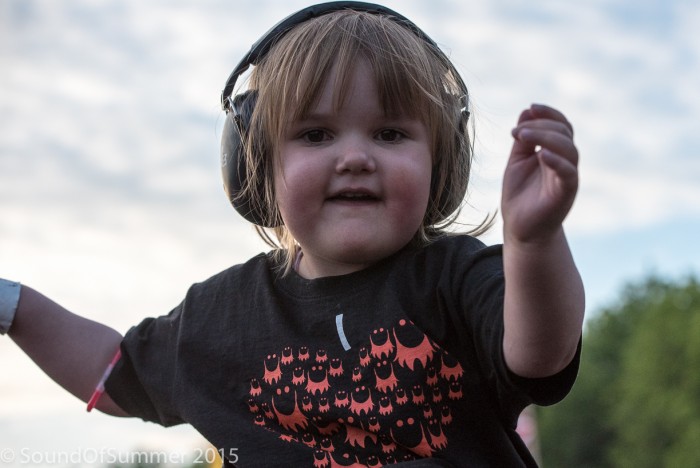 In many ways the new Model Army performance was encapsulated by the little girl in the photograph above.  She sat on her dad’s shoulders for the entire set and not once did she stop dancing and punching her little arms in the air along with the rest of the crowd.  It truly was a joy to behold.

You can find details of more New Model Army Live dates on their Official Website or on their Facebook page  The band are on Twitter as @officialNMA.