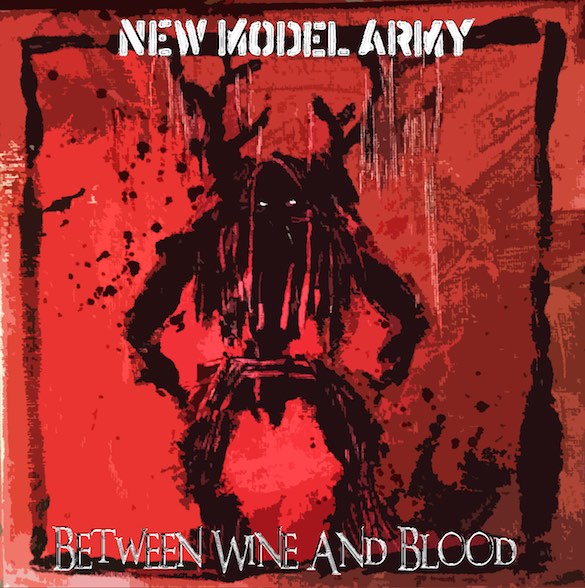 New Model Army have a new album, Between Wine And Blood, due out on September 8th 2014. The album is both a brand new studio mini-album of 6 new songs and an 11 track live album recorded on the band’s current “Between Dog and Wolf” tour. Full details below.

“Between Dog and Wolf”, released last September, received some of New Model Army’s best ever reviews in their 34 year career and was certainly their fastest selling album in 20 years, charting top 30 in UK and Germany and the major European tour through the end of last year reflected this success. The live album features songs recorded at London, Nottingham, Cambridge, Cologne and Amsterdam.

However part 2 of the Between Dog and Wolf tour planned for the Spring this year had to be postponed until Autumn when drummer Michael Dean was diagnosed with blood clots in his leg and advised not to play shows.

This unexpected time off was used to record 6 brand new songs for a mini studio album to accompany the live tracks. Said Justin:

‘When we finished “Between Dog and Wolf” we wanted to keep the momentum going, and with Michael being unwell, the time became available to get back in the studio earlier than planned. Michael was there writing and co-producing whilst he recuperated. The result is an eclectic and immediate-sounding New Model Army mini-album and feels to us like a logical move on from “Between Dog and Wolf’s experimentation.”

The album was once more mixed by Joe Barresi (Queens of the Stone Age, Tool) in L.A. Said Justin on working with Joe: “it was a pleasure again – and beginning to feel very much as if Joe’s part of the NMA family.”

“Between Wine and Blood” will be available as a limited edition double CD hardback book pack, a double vinyl gatefold album and digitally. It will be available to pre-order from Tuesday 15th July. Initial quantities of CD and LP will be signed by the band and available individually, together or as a bundle with a brand new t-shirt featuring Joolz Denby’s album artwork.