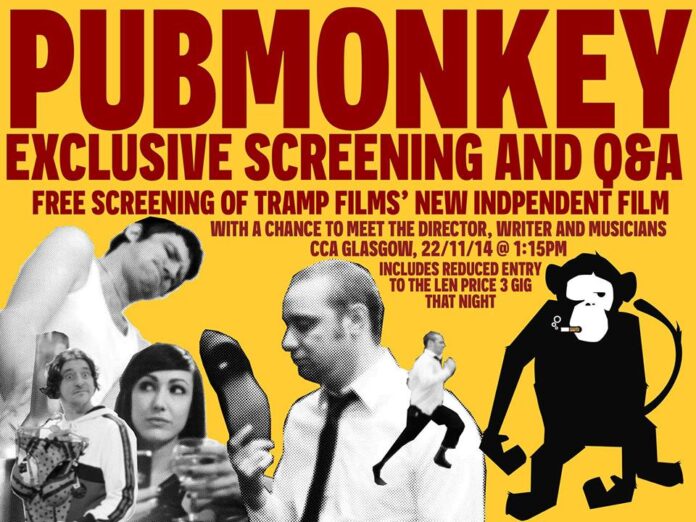 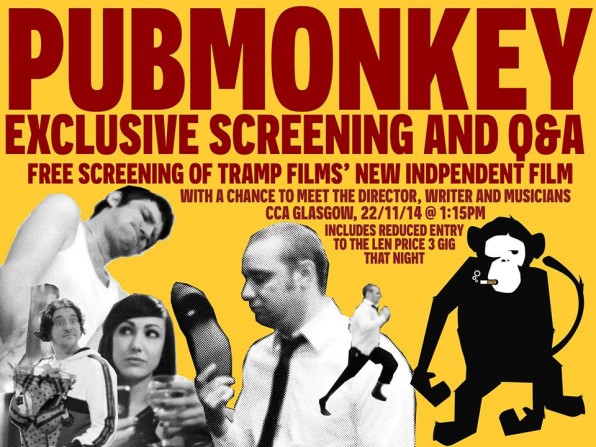 PUBMONKEY is an independent British movie produced by Tramp Films. It came to my attention due to the involvement of Medway punk / garage / mod band the wonderful Len Price 3 whose album I reviewed here.  I’ve not seen the film yet but it looks like being bloody great. Check out the trailer here:

Here are the details about the film:

This darkly comic British independent film is the first feature produced by the two brothers and cousin team known as Tramp Films. It was conceived and shot in South East London and the Medway towns.

Utilising a DIY punk ethos Tramp began shooting the film in 2009. On the strength of their script they managed to recruit a range of performers and crew to work on the project with no up-front money. With a miniscule budget, they blagged, borrowed and begged what they needed to get the thing rolling.

Over the two years or so months they went through 25 days of shooting, 4 days in the recording studio, over 20 locations, and nearly 50 cast and crew. They ended up with just over 70 minutes of film that contains close to 450 uses of the f-word, several severed limbs, and a live donkey.

They didn’t let their limited time or budget restrain their vision and scope by any means. They built a set in a disused part of a pub in Tooting which they used as a base, and shot whenever and wherever they could get the cast and crew together.

Early on in the project they were able to enlist the help of garage rock band The Len Price 3 to provide a unique score for the project which was recorded live on analogue tape to a rough cut of the film. The final film includes innovative design and animation, artfully constructed sets and the some state of the art visual effects shots that give the film a gritty sheen.

After initial closed screenings the film was described as, ‘dark, stylish and hilarious’ and the acting as ‘jaw-dropping’. The cast includes a host of new talent, friends and family of the producers, and a voice-only cameo from Steve Lamacq.

In order to continue to work with the same independent spirit with which the film was made, they are taking the movie on tour with band with a unique series of double headline screenings/gigs. These will include stops in Glasgow(Saturday 22nd November), London (16th Jan 2015) and Dublin with more to be confirmed.

Eddie is the Pubmonkey; amateur philosopher, chronic loser and Sinatra fan whose only discernible talent is entertaining lowlifes for free drinks.

His life has taken a downward turn recently as he has become stuck in a dead end job in a shoe shop. One morning he receives a phone call from an irate addict known as Loony Noonie. He accuses Eddie of stealing a shipment of cocaine and gives him till 8pm that evening to return it or he’ll kill his girlfriend.

Eddie knows nothing about the cocaine or why his girlfriend has been taken. He decides to rally some dubious characters from his murky past in a bizarre rescue attempt. These include an ageing gang of builders collectively referred to as The Berts and an unhinged debt-collector known as Bingo.

Pubmonkey screens in  Glasgow at CCA Glasgow, 350 Sauchiehall Street, G2 3JD on 22 November at 13:00, where you can get a brilliant chance to watch the movie and talk to the director, writer and the band.

Following the show you can see the Len Price 3 play at Fir Park Social club that night at a special discounted price if you were at the screening.

The London screening is not until 16th Jan 2015 at the Amersham Arms SE 14 with the Facebook event page being here.