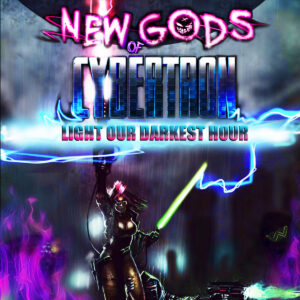 Louder Than War’s Ioan Humphreys gets taken on an electronic intergalactic space wagon.

New Gods of Cybertron hail from South West Wales and make THE most sumptuous synth driven music around. According to their Bandcamp description, “they were born in the 80’s, they watched too much TV and played too many video games”. I cannot think of a better description of a more balanced individual to be honest. This has all the traits of something special. And boy is it special. The 80s feel for video game sound tracks, sci-fi films like ‘Tron’ and ‘The Wraith’ and the electronica music scene of Sheffield and Manchester is unabashedly mined, savoured and recreated here with beautiful abandon and respect. On top of this, the visuals of the 80s are recreated in the garish EP cover visuals and cheesy lettering and fonts. This is post modern referential irony in fine form.

This five track EP is 24 minutes of joyous electronic noise making that never veers away from its winning formula. Opener ‘Clandestiny’ has a massive sound that builds and builds, layer upon layer of sumptuous electronica that takes the listener on journeys around the special universe created by The New Gods.

‘Debauchery’ has more of a heavy throb to it with added electric guitar. The track ebbs and flows to eventually let out its euphoric side with the effects and sounds used.

‘Metroplexual’ has a gentle twinkly Kraftwerk inspired tinge that leads to the most joyous 80s inspired soundscape. As the track progresses, it starts to remind one of a musical accompaniment of a ‘Tomorrow’s World’ segment. You almost expect the bloody gorgeous Maggie Philbin to appear at any moment telling us that some hand held gadget (for arguments say a phone) is going to change the world. Haha what tosh!!…….

What you get with the last two tracks are big big sounds that again border on the euphoric, yet you can tell they are done with the most minimalist effort. Very very clever stuff. The last track (Vector Sigma) has a slow intro that leads to big dramatic pregnant pauses that combine with bombastic drums. It has atmosphere and has a very visual feel to it. And as the track finishes the piano outro is just beautiful.

Having heard New Gods of Cybertron’s early stuff (‘Pre_EP’ still available on their Bandcamp) this new EP is a natural progression from their last one and just shows the talent and vision on show here. In these depressing times that we live in, i can’t help but think that what the New Gods of Cybertron have created could just be the soundtrack to Earths’ collapse and emigration to another planet. Yay!…………

Just great inventive and far reaching electronica from the darkest recesses of Wales.

New Gods of Cybertron can be found via their Soundcloud, Facebook and Bandcamp.