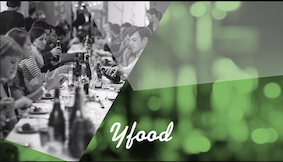 Yfood is a new monthly event in Manchester promoted by the big property developers Bruntwood discussing food and sustainability. It’s fascinating that a corporate giant are thinking in these terms and measure how much we are teetering on the brink that these giants are also trying to find a way forward. Tonight was a fascinating talk with vegan entrepreneurs that prompted John Robb to think about new generation vegans and the change in emphasis in the culture that has now become mainstream…

Can it really be only two years ago when being a vegan was considered a freak diet that only me and fellow weirdoes wrestled with?

Forever trying to explain why your body hadn’t shrivelled up or how you could eat more than a bowl of turnips was fun for a while but seemed like a daunting task if spread over a lifetime.

And yet it’s now mainstream, so mainstream that bug-eyed chancers like Piers Morgan and a clutch of ruddy-faced old hams are panicking as they find themselves on the wrong side of history. Meanwhile, veganism is surprisingly agile as it leaps into the 21st century driven by Instagram, social networking and really unlikely celebrities who have embraced vegetables for a variety of reasons and kept the most 21st century of diets at the forefront of debate.

The first Yfood of the year is also embracing veganism with speakers from vegan start up businesses like Allplants, The Green Gill and Foodomnia. The monthly event, sponsored by local property developers Bruntwood, is an interesting affair that is nurturing northern food start ups and changing attitudes to food and sustainability. Putting ideas into action, Bruntwood have been surprisingly nimble in the past year. Not just filling Manchester up with huge millennium towers and making it feel like a city of the future and not of the past they are the prime drivers in this new phase in the city’s history as it moves from the post-industrial age that dominated so much of the post-punk discourse into a Manhattanchester high rise phase.

Of course I will never live in one of these places – the meagre doubloons earned for writing this stuff don’t pay for those 40th floor suites but I must admit, controversially, that I do like the high towers as a backdrop to my city centre adventures whilst living on the 8th floor of a much cheaper old block in Hulme.

Bruntwood are taking their role in reshaping the city seriously and part of this is to create the space and the funding for a variety of projects – like the future of food which tonight, being in Veganuary, is about Future Vegan.

My generation of vegans were very much punk rockers full of ideology and beans – the tail end of the hippie whole food revolution. The Millennials on tonight’s panel have a very different attitude to the cause, mixing the idealism of non harm with a business thrust. They are ambitious, bright and dynamic and taking veganism into the heart of our culture. Veganism has gone from a handful of true believers to the centre of our culture because it now plays by the rules and anything that saves a cow for whatever reason is perfect by me.

This generational shift in vegan culture is fascinating.

Start-up business, vegan brands, social networking are the new keywords now contrasting sharply with the punk era when it was xerox zines with veggie recipes on the back page pushing the agenda to the small circle of people who gave a fuck. Then it was a small scale underground but now, like 21st century indie music compared to Crass, it’s a runaway juggernaut – a high decibel 21st century culture with very different people pushing the agenda like tonight’s speakers who come organised and engaged and ready to change the way we eat.

This is the new cutting edge of vegan – blending idealism with business realising the future of veganism has to be organised to make a difference as they talk about their businesses.

Business is no longer a dirty word. Combined with idealism this is the powerful drive that is changing diets and saving lives. Tonight is a fascinating debate and full of world-changing belief on very modern terms. Like music, like culture, the decades see changes in approach and as long as the basic message stays the same then we are winning the war.