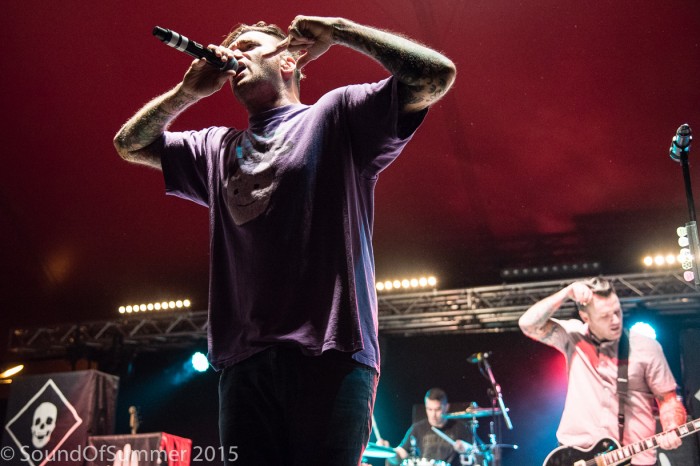 It is no exaggeration to say that New Found Glory along with Green Day and Blink-182 were responsible for the spawning of a genre that we now know as pop-punk.  New Found Glory supported Green Day on the American Idiot tour and have graced the main stage at Reading in the past.  Alan Ewart caught up with the band before their appearance at this years festival to talk about their return to Reading and how it felt to be blazing a trail.

Friday at this years Reading festival was a veritable cornucopia of delights for fans of pop-punk music.  The main stage saw superb performance from the like of Neck Deep, Panic! At the Disco and All Time Low, but it was in my favourite location at The Pit stage were pop-punk pioneers New Found Glory were to ply their trade.  Even better news for me was the fact that they clashed with Mumford and Sons so there was never any doubt as to where I would be.  Perhaps ironically watching New Found Glory did not allow me to escape the Mumford’s entirely as they played a punched up version of a Mumford’s tune, “The Cave.” To the best of my knowledge this was a world premiere.I managed to catch up with New Found Glory for a chat before their show and was a little surprised to learn that this was actually the fifth time they had played at Reading.  Metallica’s Lars Ulrich may have claimed earlier this year that their fourth appearance at reading makes Metallica the “house band” but, sorry Lars, you clearly need to join the queue behind New Found Glory.  You have a long way to go to catch Frank Turner who scored his ninth Reading appearance this year.

Sadly Reading and Leeds were New Found Glory’s last UK appearances for this year but there are plans in the offing for a UK tour next year, hopefully in the spring, but they are not ruling out festival appearances in the UK next summer.

I put it to New Found Glory that having survived virtually intact since 1997 they were now the “grand old men” of the pop punk scene. 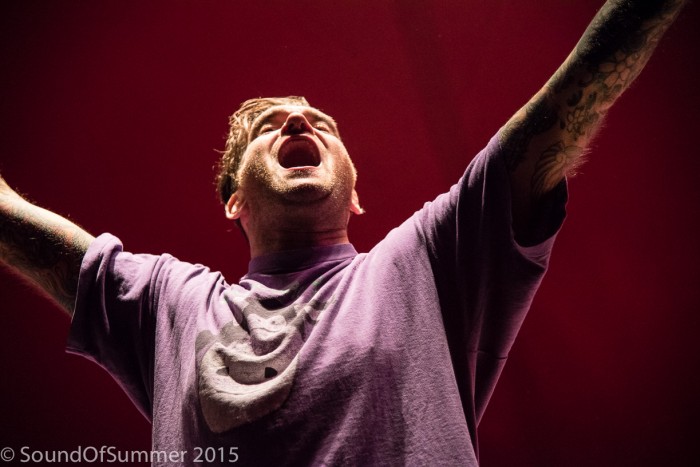 They laughingly told me that “we don’t really see it like that.  When we started out we looked up to bands like Bad Religion that paved the way for us.  To have bands looking up to us is kinda cool, but we are just normal guys who started playing music because there was nothing else to so.  Our first shows were to like 50 people.  We worked our ass off but we are really appreciative of the fact that people give a shit about our music.”

They continued “we feel young, we have fun up there on stage and that keeps us fresh.”

I asked how they felt about being credited with defining a musical genre alongside Green Day and Blink-182 and I was struck by just how humble and “ordinary” these guys are.  “It’s pretty nuts to think about that and to be honest we tend to be so busy that we don’t have time to think about things like that.  We are more likely to be thinking about and planning for our next show.  We still look up to other bands, its all a cycle really, in 10-years time bands will be looking up to Neck Deep and All Time Low.”

New Found Glory admitted that they had really enjoyed playing the main stage but that there was a special buzz about playing the smaller stages.  They told me “It is awesome to play in the tent because you know that everyone there is there specifically to see you.  They are real fans and they make the atmosphere really special.  When we talked to the festival we agreed between us that we would play The Pit this time around so we are really looking forward to it, it’s incredible and to be fair it’s less scary.”

“When we are asked how long we will keep doing this we just say ‘as long as we are having fun’.”

Readers may be aware that October will see New Found Glory issue a rerelease of their most recent album Resurrection I was interested to know what lay behind that decision.

I was told “it is something that our label do a lot and we wanted to do something special.  When we recorded the album we did some extra tracks and acoustic versions of some of the songs.  We also wrote a couple of new songs especially for the album.  We also took a couple of songs and re-recorded them.  One of them is “Vicious Love” that Hayley [Williams] from Paramore is on so it was cool to get a bunch of our friends to do guest vocals.  We have about eight tracks that will be totally different, its not like we just remixed a couple of songs.  We think that this is really something a little special for fans or we wouldn’t have done it.” 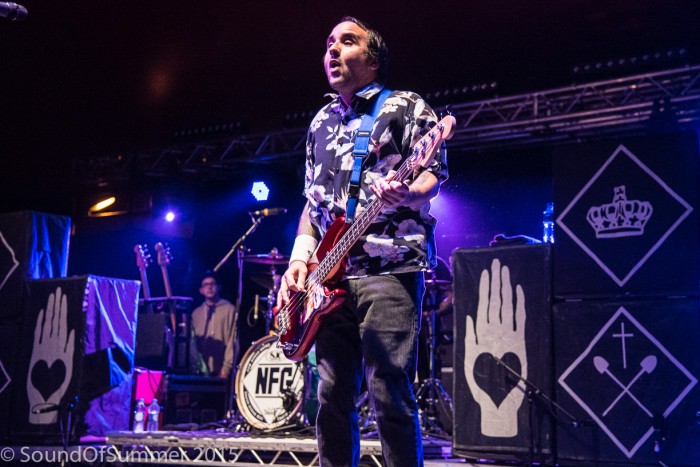 New Found Glory hope to have another album ready for release towards the end of next year and are looking to stay busy with shows and festivals until then.  It is clear that their passion and enjoyment for what they do is undiminished and this is something that came across very clearly when they headlined The Pit later that evening.

Fittingly New Found Glory’s set was bookended with the two biggest hit singles from their biggest selling album.  Opener “Understatement” set the tone for a whirlwind run through of 15 songs (and one tease) whilst closer “My Friends Over You” left the exhausted and ecstatic crowd howling for more.  As you would expect from a band with almost two decades of shared history their performance was as close to flawless as a live show is likely to get.  Jordan is a great focus for the band his energy and enthusiasm draw the eye but as with all great bands there is an almost telepathic understanding.

The guys read each other beautifully, the changes of pace and intensity keep the crowd enthralled throughout the set.  It is this ability that separates great performances from those that are merely competent, it is an ability to improvise that can’t be rehearsed.  It either exists or it doesn’t, it is that unfathomable “X-Factor,” the chemistry that separates the great from the good.  As they worked the crowd throughout their set you simply know that you are in the presence of a great pop-punk band.

Roll on 2016 and a new UK tour and an new album for New Found Glory.