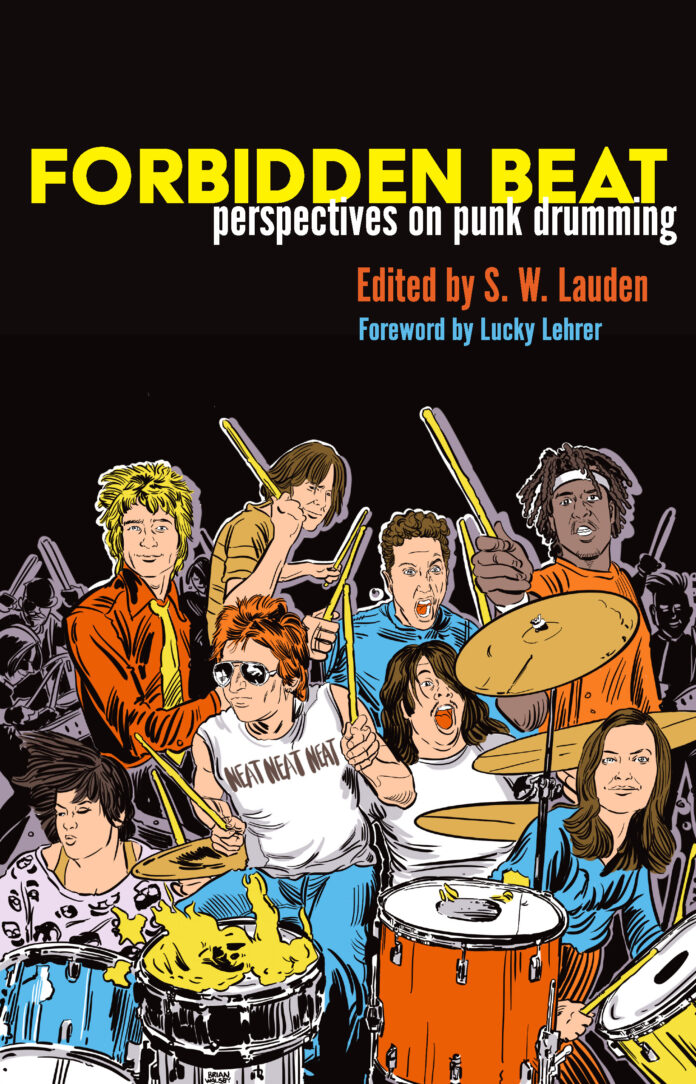 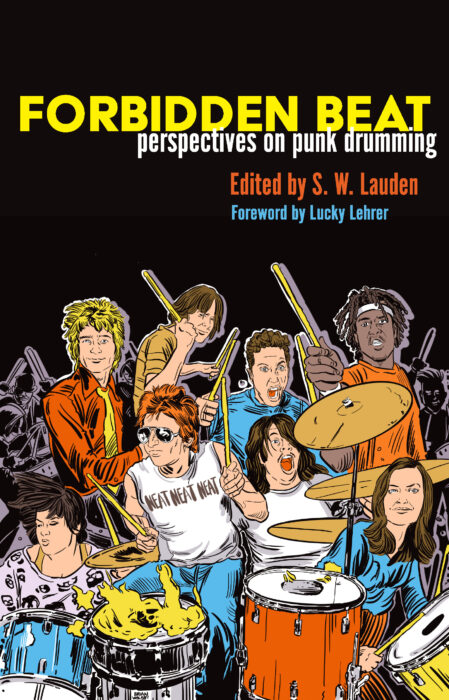 “This collection is designed to shine a spotlight on the thrashing, crashing hearts of our favorite punk bands as selected by each contributor. The perspectives and opinions on punk drumming shared in these pages are directly from people who love and respect it, have experienced it up close and personal, or have done it themselves,” writes editor S.W. Lauden in the introduction to Forbidden Beat.

“Over a 150 drummers are written about in this book, from self-taught bashers to technical wizards and just about every style of playing in between. Some have whole essays dedicated to them, while others are mentioned as important influences in a sentence or two. Taken all together, the diverse viewpoints, opinions, and personal stories included here create a kind of collage that hopefully connects the rhythmic dots for many different eras, scenes, and bands.”

Check out these quotes from Forbidden Beat:

“Much has been written about the music style, politics, and attitude of late-seventies bands, but interestingly little gets said about the drumming. The machine gun guitars and guttural vocals are endlessly detailed, but this was also an era when there were many great drummers creating their own beat narrative.” —John Robb, Louder Than War

“I always felt like we were doomed to failure, but what did I know? I loved playing with Brian, and I loved Dave and the Captain and being in a band with them, but, you know, I thought it was going to last about three months.” —Rat Scabies, The Damned

“I always watch the drummer, since I was young and saw bands play at music festivals. Of course, I’d watch the singer and guitar player, but I couldn’t take my eyes off the drummer—to me that was the coolest thing I’d ever seen.” —Lori Barbero, Babes in Toyland

“The forbidden beat and the D-beat were certainly the most fashionable rhythmic choices when it came to eighties punk’s attempts to set land speed records.” —Matt Diehl, music journalist and author of My So-Called Punk

“I knew exactly what I wanted to do in life. There was never any ‘Cover your bases. Learn a trade.’ Fuck that. Just play drums. I didn’t even graduate high school. I was like ‘I’m not playing drums enough right now because I’m wasting time at school.’”  —Tré Cool, Green Day

“I spent many days locked in my darkened room with a hand me down Discman and those practice pads, trying my best to keep up with Minor Threat’s drummer, Jeff Nelson. That made me more aware of drumming in music and was the first time I felt like I was forming my own taste in music.”—Urian Hackney, Rough Francis

“I don’t just think that Brooks Wackerman is the best to have played with Brian Baker, Jay Bentley, Mike Dimkich, Greg Graffin, Brett Gurewitz, and Greg Hetson—I think he’s the best in the history of punk rock.” —Ian Winwood, music journalist and author of Smash!

“I will always be evolving as a drummer. You can be happy, but never satisfied. I think I play perfectly for what I do and that’s enough for me. Always room to learn though.”—Phanie Diaz, Fea

“I’ve been beyond fortunate to have gotten to play drums with former Hüsker Dü/Sugar singer/guitarist Bob Mould for the last eleven years. Playing with Bob is like running a 10k while also being in a boxing match. It’s by far the most physically demanding thing I’ve ever done, and it doesn’t get any easier as the years go by.” —Jon Wurster, Bob Mould and Superchunk