Home Blogs How America Fell In Love With The Clash: Book Review by Legendary... 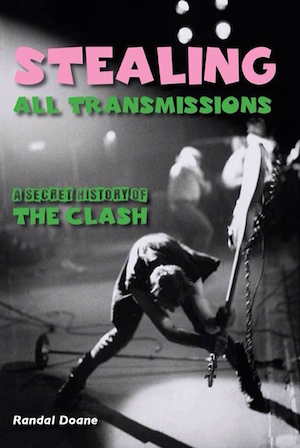 The Clash’s legendary roadie The Baker reviews the new book Stealing All Transmissions: A Secret History of The Clash by Randal Doane.

I worked for the Clash as backline roadie for seven years, and thought I knew where all the bodies were buried. But thirty years after The Clash played their last gig with Mick Jones at the US Festival in Glen Helen Park, CA, it seems timely that an important new book has emerged that details the story of how the Clash fell in love with America, and how America loved them back. Stealing All Transmissions: A Secret History of The Clash is an untold story, which until now has been sinfully ignored by the fans and journalists alike.

When we arrived in the US in February 1979, the magic just seemed to happen miraculously, like a fairy-tale. For The Clash’s debut concert in Berkeley, California, The Clash played to a raucous sold-out crowd of 3,000 or so, and to our amazement we thought, “Bloody hell – they get it!” It was only upon reading Stealing All Transmissions: A Secret History of The Clash, that I realized what might have been obvious: nothing happens in a vacuum, and many people in the alternative press, on radio, and in concert promotion were tilling the soil to make America a fertile environment for the arrival of “the only English band that mattered.” (And yes, there were even a couple of allies at Epic, the US label, too.)

If like me, you always wondered how The Clash could become the most talked about live act from England in the space of less than eighteen months, then look no further. In Stealing, Randal Doane peels the layers off a previously unknown history of the band and exposes the dynamics that allowed the band’s meteoric rise in the US. In that context, it is as much about the valiant efforts of those figures who laid the groundwork for the Clash to break America, as it is about the four musicians themselves. While we in the UK flirted with Pirate radio as an alternative to the somnambulist offerings of the BBC, US radio was in the midst of a cultural revolution. Unbeknownst to us at the time, they helped foster the initial audience for the Clash, and helped ensure their continued success.

Stealing All Transmissions (which takes it’s title from the 1981 single “Radio Clash,” Is unlike anything else you’ve ever read about the Clash and is a unique take on the early New York punk scene and the key music industry players who worked to create a fertile environment for the arrival of English punk rock in America. It is a story of secrets and betrayals; plotting and intrigues, and includes original interviews with crucial figures in radio, music journalism, and the record industry including Meg Griffin, Robert Christgau, Pam Merly, Wayne Forte, Bob Gruen, Susan Blond, and Joe Piasek, to name but a few. The book transports you on a very different journey than any previous Clash bio while the maneuverings of the FM radio deejays, music journalists, and record company execs are deftly woven into the band’s own story.

In Stealing, Randal Doane draws upon original interviews, archival sources, and his own coming-of-age to weave the histories of American FM radio, the rise of serious rock journalism, and the biography of The Clash into a tale of epic proportions. While we in the UK flirted with Pirate radio as an alternative to the somnambulist offerings of the BBC, US radio was in the midst of a cultural revolution. Doane recounts a host of hell-raising antics of freeform deejays, from streaking through competitor stations to prank on-air arrests for marijuana possession, and station take-over’s complete with hunting knives and ransom demands. Meg Griffin and Jane Hamburger solidified the fan base for punk and new wave by spinning discs at Hurrah’s, where Sid Vicious smashed a bottle over the head of Todd Smith (Patti’s brother), and landed himself at Riker’s Island. The book is full of casual asides with unpredictable tangents and the author pierces the heart of the culture and the industry that surrounded it.

It also fully explores the band’s disenchantment with the British music press backlash (which I remember well). “London Called and New York answered,” Randal cleverly comments! While Lester Bangs was penning a landmark sixteen thousand-word glowing endorsement of the band, and singing the praises of Give ‘Em Enough Rope and singles such as “White Man in Hammersmith Palais,” the British press was at full tilt, pronouncing the irrelevance of the band with the NME’s Ian Penman announcing, “The Clash is a dying myth” and Jon Savage’s famous quote, “….so do they squander their greatness.” In the US, though, the myth not only endured but flourished. By the time The Clash returned to New York’s Palladium, the entire music scene was primed and pumped with the show being broadcast live on WNEW.

Photo above: Borderline … The Clash with the Baker waiting to go into Canada…

This secret history concludes with an analysis of how we listen to music today and its impact on the written word. Randal Doane asks (and answers), the important question, “Could a band like The Clash emerge today?” He recalls the pleasures of LP listening, and reading the 10,000 word profiles in Rolling Stone, both of which required “a depth and devotion of attention rarely nurtured in the digital age.” The advent of digital music technology, internet radio, and mp3’s has rendered FM radio all but obsolete and, “….the common music experience of an analogue transmission by a regional deejay at two turntables with a microphone constructing a community of listeners….” a thing of the past. Moreover, he speculates that, “the pasts of many great bands of the present era, will not be written at length, if at all.”

Stealing All Transmissions: A Secret History of The Clash is a fascinating look at a band and the entire music community which embraced it in the US at a very special time in the history of rock music. It is an untold story; of how the Clash fell in love with America, and how America loved them back. But it does not assume the weight of being the definitive tale of one album, one man, or one band, and is thereby free to provide a refreshing and intelligent interpretation. Rising above the everyday sordidness of many previous biographies, it is a welcome addition to Clash canon. Written by a very knowledgeable writer who has the contacts and acquaintances necessary to fill in the blanks and connect the dots, it left me wanting more (hopefully, more to come?) Prepare to be astonished and pleasantly surprised, as I was!

You can purchase Stealing All Transmissions: A Secret History of The Clash here.

Randal Doane dispatches on punk and rock ‘n’ roll as @stealingclash on Twitter and at stealingalltransmissions.wordpress.com. His Louder Than War author’s archive is here.