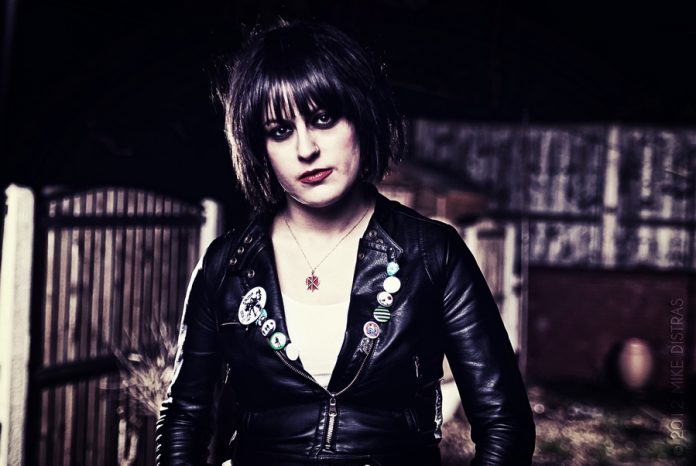 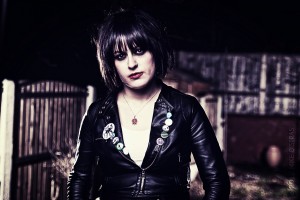 Louise Distras ”â€œ An interview with a new acoustic-punk artist who is making a noise worth listening to this year.

If I were to tell you I’m about to introduce you to a brand new acoustic singer-songwriter, almost instantaneously you’d probably be expecting you’re average run-of-the-mill folk singer or pop-hybrid, or perhaps something a bit more progressive like PJ Harvey or Feist.

I can tell you now that Louise Distras is the complete antithesis of your average singer armed with an acoustic guitar. As it is more and more popular now with acoustic music hitting the charts, it seems that everybody is picking up a guitar and writing love songs. Louise Distras resents that, “Everyone’s heard of Ellie Goulding right? Well I suppose she makes me look like the antichrist.”Â

Based in Wakefield, West Yorkshire, Louise Distras is expected to make a big impact on the British punk scene over the next year. She’s already being compared to a female Billy Bragg or Frank Turner, and even she has something to say about those comparisons, “People are always going to compare me to Frank Turner because he’s experiencing a lot of success at the moment. To me it’s no different than getting compared to Courtney Love when my hair is blonde and when my hair is black I get compared to Brody Dalle.

I guess not many people of my generation know about Woody Guthrie and that his daughter contacted Billy Bragg and asked him to put together songs using the lyrics Guthrie had left behind after he died. Three years later Bragg and Wilco released Mermaid Avenue, and Guthrie’s message reached a younger generation. That kind of statement just goes to show how important and relevant Billy Bragg was and still is as an artist and an activist, so I find any sort of comparison between my music and Billy Bragg’s very cool.”Â

Distras has been exposed to a rich variety of music from a very young age, and now takes a very introspective approach to song writing, something that is apparent to be a bold step away and above your average artist, “I was six years old when I started reading and writing music. As a child I was a total outcast. I was bullied at school and I was bullied at home. I was angry and I hated myself and all the atrocities in my life. Although I was classically trained, my outlook completely changed when I was 12 and I heard ”ËœBleach’ by Nirvana for the first time. Through Nirvana I discovered Grunge and Punk Rock. It changed my life, and that’s what my song Bullets is about. It’s a story about my Mother smashing my first guitar to pieces right in front of me, aged 13 years old.”Â

Now at the age of 24 it’s almost vital that Nirvana became part of Distras’ life as a teenager, leaving her with the passion and energy that is now reflected in her music and the ability to fuel her anger into the more productive medium of song writing. The thing that attracts people to Louise Distras is that she has something to say. She’s not writing just for therapeutic benefits, she’s a quintessential punk in every sense and is not afraid for standing up for what she believes in.

“I ran away from home when I was 16 and I’ve toured pretty much constantly ever since. I’d be lying if I said it’s been an easy ride, nothing worthwhile ever is.
Contrary to popular belief sexism is still very much prevalent in the music business across all levels, and I have been on the receiving end of it most of the time.
There are a lot of guys out there that expect me to use my body as a currency to be able to get the coverage and gigs that are categorically given to male artists without a second thought. It’s very much a case of what I look like seems to be more important than what I say and do, and that’s why I wrote my song ‘The Hand You Hold’; which explores consumerism, feminism, and autonomy of the individual.
Over the past ten years I have only ever played two gigs on an all female bill, and I am often the only girl on the line-up – I hate the prejudice that’s out there, but at the same time I believe that only a weak woman wouldn’t get past the prejudice, and that a strong woman wouldn’t even recognise it as a problem.
It has to be that way and you have to stand by your beliefs, because as soon as you start to doubt yourself the world will eat you alive. I’m proud of the fact I’ve always played my cards straight and I’ve never used sex as a means of getting noticed.”Â 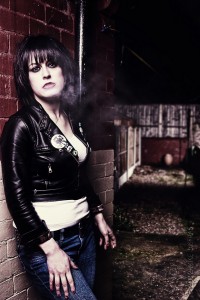 On the gigging circuit Louise Distras is working as hard as ever in the midst of a very confusing time for the music industry. With money being an issue due to album sales shooting down, Distras seems like she has an attitude that perhaps young musicians will be able to take a lot from, “I live a very simple life. I have no drug habit to feed, no loans, no boyfriend, no kids, no 9 – 5 job. I don’t desire any of those things either, the lack of them is liberating for me because it allows me to focus 100% on my creativity. My rent and bills are paid and there’s food in my fridge when I’m at home. That’s all that matters to me.
I come from a single parent family and a working class background – we never had any money. I’m 24 years old and I still haven’t got any money and I’ve yet to experience any form of stability in my life, so regarding my art and touring lifestyle as a price worth paying for is an alien concept to me.”Â

Distras certainly isn’t in this for the money and that’s an attitude stemming back to the original punks. The musicians that played their music as an output for their anger and a platform for their art and nothing else, “If a person’s motivation for making music is the money and a ‘rock star lifestyle’ then they’re deluded and in the wrong game.”Â

As Distras prepares for her 2012 release of her debut album, it’s clear this could be a memorable year for this powerful new artist, “January 2012 will see the completion of my new record that I’ve spent the last five months recording in London between tours and once a few things have been finalised I will be able to talk about everything that’s going to be happening in 2012.”Â You can catch her at Strummercamp this June to experience just what she has to offer.

Ultimately I feel Louise Distras is like that first vicious punch to the nose; you may feel it, it may hurt, it may be aggressive. But it’s the first time you’ve experienced anything like it, and secretly, you rather enjoyed the thrill. She does have that endearing look, the punk rock style, but that’s secondary. Louise Distras is as energetic and passionate as Joe Strummer, and that raw power is legitimate, as she says herself “If you don’t believe in what you’re singing about then why bother getting up onstage or making a record in the first place?”Â This is what Louise Distras is about, it’s what she stands for, and it’s something she’ll be shouting about in this very productive year for this new artist.

Louise is currently offerring free downloads from her website