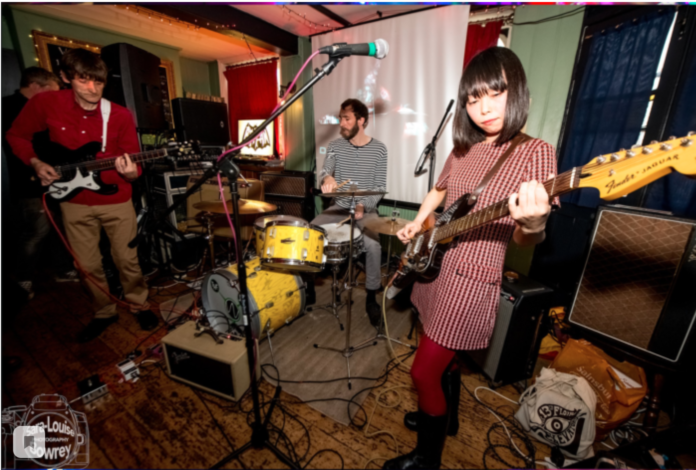 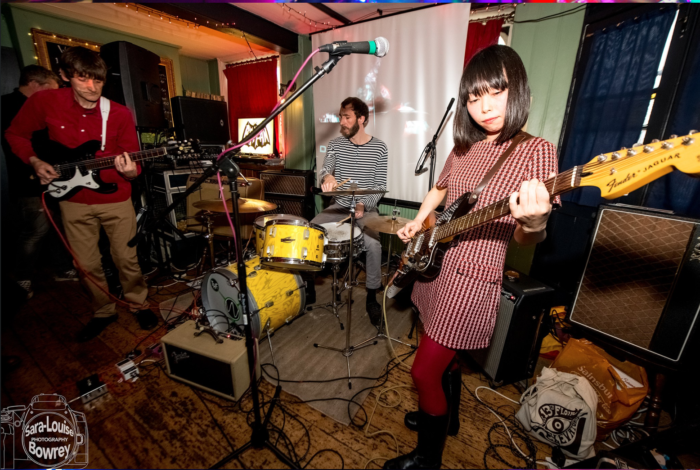 Venelina Varbanova is from Bulgaria. She is a big lover of good music with bad habits, a young PR and a breakthrough music journalist. She is at the beginning of creating a music magazine BANG BANG– good Music for bad People.

Last but not least Venelina reads Louder Than War, and tell us from Plovdiv; ‘Cheers to all good punk rockers’ (with more ice)

Let the sunrise and sea foam pour on the strings of the old rock and roll!

Galactic guitars, high waves, uplifting reefs and impatient pauses that bring the echo with sweaty palms. This is a new surf energy and if we look back in the late 60’s it’ll remind us of Dick Dale, The Chantays or The Ventures.

It’s time for a psychedelic storm with The Space Agency.

Formed in 2002 by Simon Jones from England, Hiromi Jones from Japan & Andrew Bowler from Wales, they have released 4 albums of their unique, out of this world Instrumental Sounds.

Simon Jones’ first band was VIBRASONIC, who began recording psychedelic songs and instrumentals in 1990, releasing 2 albums and several singles. They went on to perform with guitar legends Dick Dale & Link Wray before their demise in the late nineties.

Simon : How the band formed: Our Drummer Andy came from Wales & was my next door neighbour. One day when I was playing guitar he knocked on my door, when I answered he said “is that you playing guitar?”, I thought he was knocking to complain & said sorry for making a noise but he said “no I’m not complaining it sounds great, I am a drummer & would you like to go for a jam!”.Hiromi came to Brighton from Japan to study English. We met in the street in 2002 and became a couple, I did not know she could play music & one day I was asleep in bed & could hear someone in the next room playing bass along with songs by The Ventures. I got out of bed wondering who it was & found Hiromi sitting on the floor playing my bass guitar. She said “sorry I played your guitar” & I said “what do you mean sorry?, keep playing!” Later I found out she had been playing bass since she was 13 but thought she wasn’t any good so she had been keeping it a secret. So the 3 of us started going to a studio to play for fun & ended up forming a band.

If you want to apologize to each other now, what will it be? And do you believe in coincidences?

Simon: I don’t know if I believe in destiny or fate, but coincidence has happened a lot to me and I think being in the right place at the right time helps a lot. If I was to apologize it would be for being lazy & not writing more songs.

Hiromi: I was apologetic to Simon, not for disturbing his sleep but for playing his bass guitar without his permission. We became a couple after a week after meeting but I didn’t tell him I played bass before because I thought I’m not that good at playing so I didn’t need to mention it. But when he heard me play, he wanted me to keep playing. I did so even though I had no confidence at all. He did the same to me about guitar and drums. He kind of bullied me into playing but I’m glad he did because now I love playing! If I was to apologize to Simon now, it would be “sorry half of your guitars are mine now. that I’m your wife!”

Andy: I am the lucky one just in the right place at the right time. Simon’s guitar playing took me back to hearing Rock n’ roll sounds when I was younger.

I would apologize to my band mates that I am still learning…The Space Agency? Where does the band’s name come?

Simon: We started playing in a studio just to have fun and entertain ourselves, we always took a recording machine and recorded what we played each time. After playing together for a while we began to make songs and thought maybe we should be a band and play live gigs and release our recordings. So we thought we needed a name, I was describing something we’d been recording as having a “Space Age” sound and Hiromi said we should call our band The Space Agency, I thought as a lot of music & sounds we like were made during The Space Age (1950’s & 1960’s) that it was a good name and was easy to remember.

And which are your space powers?

Simon: Some extra arms & hands would be useful for my special space power so I could play some extra rhythm guitar parts when we play live.

Hiromi: Beers to make me visible. I’m shy and don’t want to be seen, so to play gigs, I need beers to be comfortable & enjoy myself. (And I love the taste…)

Is your new album coming out right now? What is it called and how will you distribute it? Tell us how you feel about the work done so far?

Simon: Our new album is finished it is called “Celestial Sounds of The Space Agency” We will distribute it (Vinyl) by mail order from our Tremolo Records website, on our Band Camp page & as digital download. We recorded everything ourselves in a rehearsal studio & at home. We are happy with the results as we have captured a good mixture of sounds & styles that we like and think it is a good representation of us. When we play live we swap instruments for some songs. As we are at different levels to each other at playing on different instruments, it gives a different atmosphere, for instance, Hiromi’s way of playing guitar is very different to mine & my way of playing drums is different to the others so we have tried to capture this atmosphere on our album. Hiromi is playing the Drums & Andy is playing Bass Guitar on one song for the first time on a recording.

Simon has been playing, before The Space Agency, with Dick Dale and Link Wray? So, Simon, what did you manage to take from these masters of rock and roll culture?

Simon: That was a long time ago in the 1990’s with my previous band called Vibrasonic. They were 2 guitar players that I liked a lot so it was definitely an honor to get to play with those guys and also a lot of fun. Both were very loud and my ears are still ringing from it.

Why did you choose this style, instrumental psychedelic? Did the taste bring you together, I mean you want that from the beginning, or…?

Simon: My parents had a lot of good records at home, 50’s Rock n Roll, Opera, Classical, Country music and things like Les Paul & Mary Ford, Chet Atkins, so I heard a mixture of different music from an early age. When my father bought me “The Shadows – 20 Golden Greats” album I wanted to play the drums and asked for a drum kit for my 10th birthday, but I was given a guitar instead because my parents didn’t want the noise of me bashing a drum kit, so I started playing guitar and learned by playing along with records. I also used to listen to Alexis Korner’s Radio show in the late 1970’s with my father and he would sometimes play guitar instrumentals on there. My brother was a Punk so I heard all those bands around at that time & I started going out to gigs with him & his friends in 1979 at The Rock Garden in Middlesbrough. In the 1980’s as I got older, I started to find Psychedelic & Garage Punk records like The Electric Prunes, The Seeds, The Chocolate Watchband, The 13th Floor Elevators, Pebbles and Nuggets compilations, The Ventures & Surf Instrumentals, Japanese bands and other International 60’s bands and liked them also. I studied how to make the sounds I liked and found out what equipment & instruments I needed to make them. Also I had some training in Indian Classical music learning the Sarod (like a fretless Sitar) & the Sitar in the early 1990’s.

Who is the boss of your band, who makes the decisions?

Simon: We try to have a democracy and wouldn’t choose to do something that would upset one of us. Everything has to be good fun otherwise there’s no point to do it. We are sure that you miss the stage and everyone looks at their photos from previous gigs, there is nostalgia! Would you send us your favourite photo/s from a recent concert? And during the pandemic did you manage to do something you didn’t have time before?

During these weird lockdown times we have been rediscovering our old VHS videos collection and watching old movies & TV series such as The Outer Limits, Henry’s Cat and lots of Hanna Barbera cartoons.