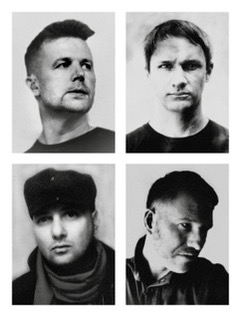 New Macclesfield super group band ShadowParty have announced their debut album, out on Mute on 27 July 2018. ShadowParty are a band united by a fairly unusual circumstance, each member is a latter-day addition to a huge band, and here they’ve combined as synthpop’s answer to The Avengers.

The nucleus of the group formed when Josh Hager and Tom Chapman met in Boston, Massachusetts. Josh is a former member of The Rentals and currently plays guitar and keyboards in Devo. Tom Chapman is the former bass player of Bad Lieutenant who followed frontman Bernard Sumner to New Order in 2011 when the band reunited for a series of charity gigs. Completing the group are Phil Cunningham, Marion founder member and New Order’s guitarist since 2002, and drummer Jeff Friedl, who plays for Devo.

Newly signed to Mute, ShadowParty’s debut, recorded in Boston, LA, Manchester and, of course, Macclesfield, is an album that nods to those groups but exists in its own right entirely, a synth-pop album with guitars and strings, and guests including the incomparable vocalist Denise Johnson (Primal Scream, A Certain Ratio) and The Verve’s revered guitarist Nick McCabe.

It’s taken some time to get here. ShadowParty’s origins stretch back to Chapman’s move across the Atlantic in 2014. Raised in France, he’d moved to Manchester as a teenager, lured by the music scene and hoping to be a part of it. Moving to Boston because of family commitments “I started to get a bit restless and thinking I should be meeting with some musicians and doing something with the time on my hands,” he says. “I put the word out there and Josh Hager’s name came up. It was just a matter of getting in touch with him, being brave and knocking on his door.” 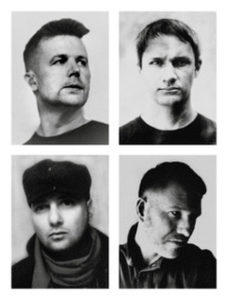 Josh, too, was in need of a new thing. “This was before I was in Devo. I was playing with my band and doing solo stuff but it was depressing,” he says. “I was feeling… you know when you sort of surrender to the universe and just give up? That’s how it was. But that’s when the best things happen.”

“We got on straight away because we had a lot in common, a lot of similar records in our collections – Kraftwerk, early 80s punk bands, electro, Joy Division,” says Tom. “And he had one of the Devo plant pot hats in his studio.

Tom and Josh’s shared interests generated an idea for the kind of music they might make together. “We literally just sat down and started writing, that first night we met, and wrote the basis of three songs on the [forthcoming debut] album,” says Josh. “We hit it off right away. For me, having somebody as motivated as Tom and as talented as Tom… I’ve always been the guy in the band who’s been pulling the train along, so to have someone lighting a fire under my ass is a completely new experience for me.”

They also found common ground in their experiences in New Order and Devo. “We laughed about how sometimes you’d do after shows and people would queue up for autographs, and as the line shuffles through they’d skip over you,” says Josh. “Or they’d slide the CD right past you saying, ‘No offence, man, no offence.’”

With the project taking shape, Chapman asked New Order bandmate Phil Cunningham to listen to album track ‘The Valley’. Chapman and Cunningham form one of the writing partnerships on which New Order operated while recording 2015’s acclaimed Music Complete album. “I think I’d have been slightly pissed off if he didn’t ask me to get involved! ”Cunningham jokes. “Me and Tom come from the same place musically, so I instinctively knew the vibe him and Josh were going for.”

“Phil was a no brainer,” says Tom. “And for Josh, getting Jeff, who drums in Devo, was the same. The nucleus of the band is very much the four of us – now two in Manchester, one in Los Angeles, one in Boston.” As an international band, recording sessions have taken place in Boston, Los Angeles, Manchester and, of course, Macclesfield. “I feel like we’ve done a world tour before we’ve even played a show,” says Phil.

In Manchester the band invited various collaborators to appear as guests, such as former Verve man Nick McCabe, who plays guitar on ‘Even So’ and ‘Marigold’. “Personally, I think he’s probably the most underrated guitarist of his generation,” says Tom, “We all respect what we each do and there’s no big egos in there.” adds Phil.

Another guest, Denise Johnson lends her considerable talents to six of the album’s tracks, including the band’s future single Celebrate. “She’s worked with us in New Order but I’ve always wanted to work with her on a personal level,” says Tom. “I’ve always been a huge fan of her vocals and her contribution to the record was invaluable.”

Completing the guests are Whitney Fierce, a DJ from Los Angeles who appears on backing vocals, and Joe Duddell, the Manchester-based arranger who’s worked with – among many others – Elbow, Doves, Blossoms, and New Order, for whom he arranged strings for Music Complete and created and scored a 12-piece synthesiser orchestra for a run of Manchester International Festival shows.

Now signed to Mute (“It’s the perfect home,” says Phil) the band release their eponymously titled debut album and take Shadowparty on the road in 2018. “A track like ‘Celebrate’ will be great live, because it’s a real band thing,” says Phil. “When you break that mould and you’re open and receptive to each other’s styles, then it opens up an entirely new world.” says Jeff.

ShadowParty, then, because it’s the members of bands who don’t normally get the lion’s share of the limelight. This, you suspect, won’t last for much longer.

ShadowParty return to the UK for an exclusive appearance at Festival Number 6 with the Number 6 orchestra, arranged by Duddell, the festival’s composer-in-residence. Further dates are due to be announced. 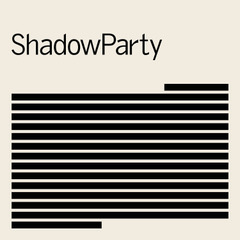 The Band have toured already in 2018, playing the North By Northwich, The Great Escape and Dot To Dot festivals. If you want to follow the band for further tour dates and news you can follow them at their Facebook, Instagram and Twitter pages.