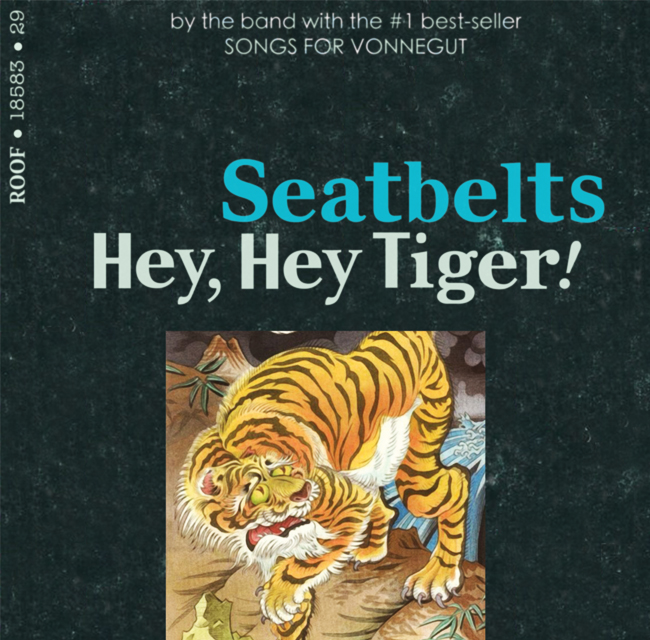 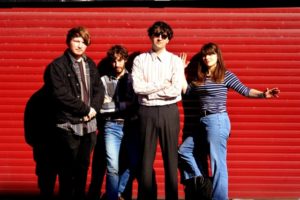 The track is an upbeat, head spinning introduction to the new project, Seatbelts,  from James Madden and Ryan Murphy of Liverpool indie pop quartet, Hooton Tennis Club. The motorik beat, recorded through a Wah Wah pedal, is accompanied by the procession-like, percussive hits of James’ Mums chip pan that will certainly leave the listeners ears fried.

Through the dizzying sounds and perpetual twang of the classic Jimi Hendrix chords, James sings “Don’t listen out to the calling of the parade, pick it up and it will never be the same…”. This can only be read as an observation of the cut throat business tactics played out by fellow humans that inhabit this blue and green globe. Ryan expands on James’ declaration with “…the snakes and ladders, social climbing, nothing seems safe.” Serious stuff. Watch out for that Tiger!

The single Hey, Hey Tiger! is out now on Rooftop Records.

Interview with Ryan and James

Hello, can you please let me know the first music you listened to?

Ryan: When I was very little, I remember having a portable blue cassette player and a copy of Crocodile Shoes by Jimmy Nail. I used to play it over and over. I had no context or concept of the music industry, singer-songwriters, studios, etc. so to me it seemed magical and unique.

What was the first serious music you listened to?

Ryan:I used to listen to Foo Fighters, Nirvana, The White Stripes… I had a No Doubt CD, and some Daft Punk cassettes my Dad had knocking around. It depends what you mean by serious though, as I would guess Jimmy Nail took what he was doing seriously to some degree.

James: I guess seeing my dad, headphones on, playing records in the corner of the living room each night after work stirred something in my little boy mind. “Where is dad transporting himself to? Why is dad holding his fist up in the air chanting a lyric from War Pigs by Black Sabbath? It was enchanting, otherworldly and although I didn’t really know it, a sanctuary, away from the gritty responsibilities of adulthood.

How did you first get into playing music?

James: Being young, wanting to follow what other teenagers did. Luckily, my friendship group were into music. I remember I stopped playing football one week and nagged my Dad to get me a guitar because I had just discovered Jimi Hendrix.

How did Seatbelts meet?

James: I met Abi (keyboards/guitars/vocals) when starting a job a year or so back at the British Music Experience on the docks. We both worked as Visitor Assistants which is a pass for talking and playing music all day. We met Alex (drums/percussion) when mixing our songs in Parr Street Studios with Chris Taylor.

James: Seatbelts began as a project and morphed into a band a couple of months ago. It’s still very early doors…

Who are your influences at the moment and why?

Ryan: I’m investing time (and money) in the back catalogs of Tom Waits, Bob Dylan, The Beatles, et al. I’m trying to avoid the Spotify mentality: next, next, next… I want to sit down and learn something by focusing my attention on one band or artist at a time. Currently, the word ‘like’ feels vacuous because it is overused, which has created a culture of surface level interests – shortened attention spans. I’m not saying it’s wrong to like things willy-nilly, but I think one has to dig a little deeper to claim influence.

Are you going out on tour this year?

Ryan: We’re hoping to do a fair few shows this year, but there’s no plan for a tour as of yet.

James: I guess it’s a vital element of the ‘being in a band’ world and can be fun. However, my favourite elements have to be writing and recording. The reward of writing something you don’t mind listening back to more than once is extremely satisfying.

What do you hope to achieve as a band?

James: We’re putting out another song called A World Drained Of Wonder sometime in this month (April), which has been taken from the Songs For Vonnegut EP. We aim to release the full EP in May. We’re currently working on some music videos and we’re also trying to pinch a bit of time to work on the live set, too. It’s exciting to have the chance to release new stuff.

Ryan: You’ll have to ask the weatherman.