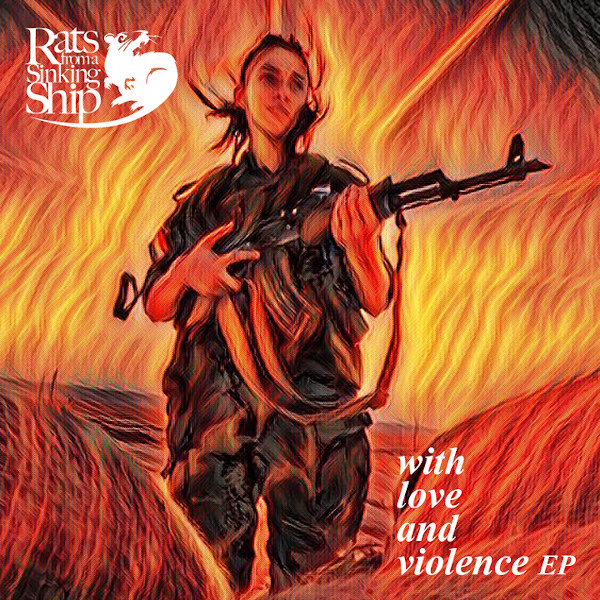 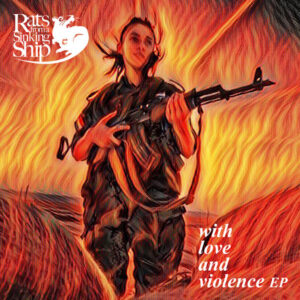 Rats From A Sinking Ship

Nathan Brown profiles one of the UK’s most un-apologetically political bands who play their own brand of rap/punk/agit-rock and traces their development over the past four years.

Not technically a ‘new band’, but one deserving of closer scrutiny and wider exposure. As I myself espoused on a snap review of their video Loony Left and Neil Hodge subsequently mentioned in his review of the We Are Heathen album from which it came, Rats From A Sinking Ship are un-apologetically political. They have seen injustice and they are angry about it: “the madness of Government war criminality, animal rights abuses, exploitation of women in the sex industry and the global debasement of the LGBT rights community.” As I said before, they have an image that is “part Crass, part Clash, part urban guerilla”. Here I take a look back at how they have developed their “searing-hot metal / punk crossover”.

Some bands put huge amounts of effort into getting everything right before they unleash themselves on the world. They rehearse and re-write, producing their best songs, spending a couple of years to make sure that when they drop it is with a mighty bang. They release their first album. It goes down a storm. Then they are under to pressure to release what has now become a tired old cliche: “That second difficult album”. And they have to do it quickly, on the fly, adopting a different approach to writing the songs that made their name. It is no surprise that the results can be disappointing. And each subsequent record that comes out offers diminishing returns, so you can get to the stage of each album having 1 or 2 good songs surrounded by filler – and only 1 will survive the promotional tour. I can think of plenty of bands whose albums I wouldn’t bother with after the first one or two. You may have your own list.

Then there are the bands who hit the ground running and put stuff out quickly, warts and all, a bit rough the edges. They do their refining as they release more records, gathering momentum and getting better with every release. Having reviewed the back catalogue it is this latter category into which I would place Rats From A Sinking Ship.  You can hear how they have used each release as a line in the sand from which they must move forward.

Based around rapper/singer Alex Lusty and guitarist Jamie Price, Rats From A Sinking Ship hit the streets with the album Rise As One in 2015 with a full band. The guitar ranges between grungey and metallic. The vocals are strident and while there is a hint of the rap styling that has become a defining characteristic of the band, it is not so obviously front and centre. As you listen through you notice the band’s sound develop. By the close of their debut album, on the song No Nazi in particular, the rap/punk crossover is now more obvious. However, at this stage they could have been just another punk band, not particularly standing out from the crowd.

A year later Peasants Revolt saw the introduction of the drum machine beats, which ironically is part of what gives the band their energy. The guitar sound seems more targeted, heavier, with more metal licks and the production overall is vastly superior to Rise as One.

The catchy take-away is “Hang Him” in which these best revolutionaries cell for a lynching of Tony Blair. Sexy Hot Girls combines a Sabbath style riff with something of Sleaford Mods while the subject matter is written from the point of view of a trafficked sex worker. If You Must Shoot Animals Use a Camera, traverses from anger to sorrow, detailing global destruction and game hunting. Declaration of Nothing is a powerful dismantling of modern culture….or lack of it…when they note that “Anarchy in the UK has become Apathy in the UK” is is a sad but true observation. There is still up beat punk e.g. Protect and Survive, which drops samples from the government info film of the title into a song about the cold war. Queer condemns homophobic attacks over a metally punk tune with the appeal “He loves he and she loves she let people be who they want to be” Having covered The Smiths’ Panic on the previous album this time they bagged Run To The Hills – yes the Iron Maiden song – but not how you’ve heard it before. Very much a rap take, as if through the lens of Public Enemy. So by album 2 they were firmly in their stride and with a more honed identity.

The way some of the beats and bass interact borrows from the likes of Fun Da Mental and Asian Dub Foundation especially on stand out track Cursory Rhymes. On this song the choruses are bastardised versions of the nursery rhymes London Bridge is Falling Down,The Grand Old Duke Of York and Row Row Row Your Boat. When Lusty announces “I am Gaza. I’m a martyr. Suicide bomber and disaster after” and “I am the invader and traitor. I am the animal liberator” is is pure Chuck D. In the current environment Lusty is using powerful words others are afraid to utter. Meanwhile the metal is present in Monsters Aren’t Good For The Environment when they borrow the intro from Sabbath’s Iron Man.

The right wing media come in for a deserved kicking. Katie Fucking Hopkins shows their ability to mix their sense of humour with anger and disdain when they put the racist columnist in their sights rhyming “Throw her off Tower Bridge” with “I feel sorry for her kids”. A Disgusting Filthy Rag outlines examples of the bile, lies and slurs that The Sun throws out before declaring “Don’t read The Sun and don’t buy The Sun”. The middle 8 features a lovely sample from the wonderful Artist Taxi Driver (check him out if you don’t already).

A version of Trumpton Riots is unlike their other covers in that it is not so far from the original – albeit a more raw delivery than Half Man Half Biscuit. If you’re of a certain age it will be satisfyingly familiar.

A 4 track EP With Love and Violence in early 2019 featured Love is the Answer – the message to street revolutionaries that despite the hate – and the people who deserve to be hated – that “hope, peace and unity and love is the answer. We have to realise that we have a common enemy”. Having said that they go on to assert If You Hunt Then You’re A Cunt. Sometimes it’s the titles alone that appeal to me. The Ep also featured A Disgusting Filthy Rag from the previous album and a remastered, brighter version of No Nazi.

This brings us up to the latest album, which sees them beef up their sound further with the addition of beats and loops from Markus Kienzl. Taken together you can track the way Rats From A Sinking Ship have improved their song writing ability and the collaboration with Benjamin Zephaniah is a sure sign of success to come. One thing that has not changed over their 4 year life span is the fire and anger. As long as they don’t lose that they will always remain one to watch.

So are they doing anything ground breakingly new? Not especially. Is it good? Hell, yeah. And do they matter? Whether you think music is able to cause social change or just reflects it, the issues Rats are addressing are sometimes on the outer reaches of political thinking and pushing boundaries. So yeah. Whether they influence people to challenge the way they think and effecr change, or they provide reassurance against the isolation of thinking you hold those ideas alone, it matters.