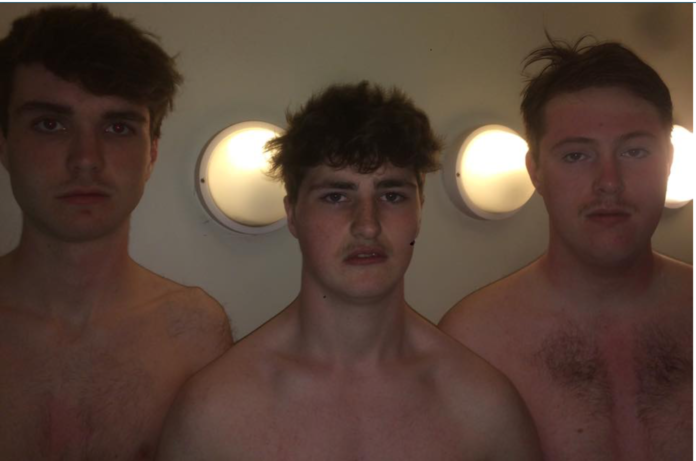 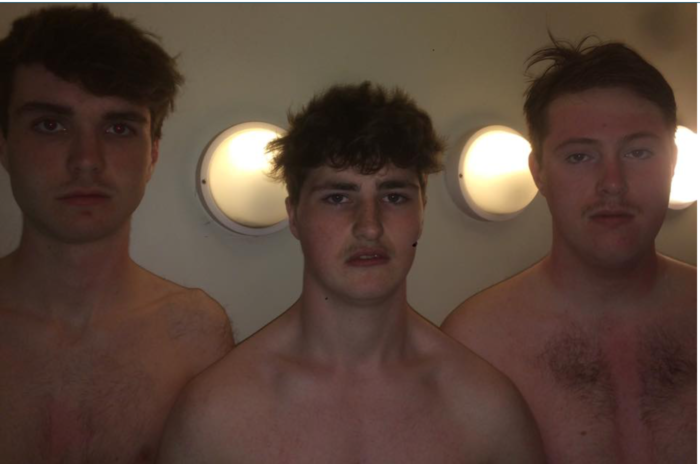 As the (always snobbish and frequently tiresome) discourse of popular music demonstrates, the definition of ‘rock’ is impossibly elusive, sparks fierce debate whenever a new generation emerges (‘this ain’t rock, it sounds nowt like the Beatles. P-too, p-too’). Some boil the notion down to the ‘spirit’ of rock music, irrespective of genre; the moniker has also been given seemingly crass hybrid forms: dad rock, lad rock, bad rock, and the like. Thus, the description of the sound produced by ‘two pound’ – similarly elusive and nigh indescribable – is quite fitting. “Rock music – rock and roll lifestyle baby”, Sonny Stuffins, the band’s vocalist/bassist and songwriter, describes the band’s stream of aural delight; all of a myriad quality.

£2 also includes guitarists Seth and Ben, Sonny’s brother Arley on drums, trumpeter Christie, and Charlie, “…here to have a good time and help us all learn something new today…”, Sonny explains. Numerous tracks – especially the superbly intoxicating Shower Beer and the melancholier Crab – are also underscored by the incredible backing vocals of Charlotte Lynch.

It isn’t just their disparately blended sound which distinguishes £2 from hordes of ‘indie-rock clones’. £2, unlike multitudes of artists atop today’s musical landscape, possess an undeniably joyous angle to their craft and solely profess to do it for fun – “…it’s just having fun with my friends…”. Undoubtedly, this unfettered energy also permeate the band’s song-writing – “…sometimes I have the ideas, sometimes I only have a piece and the guys flesh it out sometimes they come to me and give me the piece and then I add some things…lot of the time the song making choices are about what would be funny to do here.”

Their influences and audial proclivities are incredibly disparate, yet simultaneously complimentary. Sonny relays his fondness for “…nice music where I can relax. Hawaiian musical treasures…”, while his bandmates are deeply into what he terms “…interesting stuff which just sounds scary to me…”, such as “…jazz and rock music…”, “…like the band Throbbing Gristle and all sorts.”

Nevertheless, they are united by their local bands: “…our favourite band Knuckle…”, and “…best friends Persian Rug Sale – they are the best…”. It is perhaps this medley of distinct but wildly clashing palettes which provides £2 with a similarly incomparable melange of sound.

As much as they are fans and friends of these local bands, they were also profound foundations in £2’s growth. Rob Crisp, part of Knuckle, was the primary source in Sonny’s musical birth – it was from him that Sonny learnt guitar and songwriting; he also produced the band’s debut album, Two Pound Go Out.

The album cover signposts their startlingly singular mould: an endearingly captivating portrait of Sonny’s dad; “…I think he doesn’t like how he looks in it, but I think it’s a very nice photo, he has a very lovely smile…”.

The album is strewn with a plethora of song structures, loping lavishly and refreshingly from 3-minutes to tracks such as Quid, a mere 40 seconds of barnstorming, anecdotal noise oozing spontaneity. This varied, unpredictable nature is one scarcely seen, irrespective of genre; just one way £2 are so distinguishable, while also seemingly pouring every genre and influence into a blender and emerging with an unparalleled, enormously satisfying creation.

Whilst reflecting upon £2’s cocktail of sounds, there are very few artists which sprung to mind when summoning some comparison, the only exception one who possesses similarly enigmatic traits: Captain Beefheart and His Magic Band. Like Beefheart, £2 eschew the straightforward, tedious ‘band mythos’ for a more intriguing narrative: “Back in the 80s, we all used to go drinking together after our day jobs at the tarmac plant. It was hard work and didn’t pay well but we made do. One night over a bowl of a delicious meal at my house Christie said how come we just start a band right now Seth said that sounds very nice and then those two started a band…I only joined in the year 2019 though.”

The approach Sonny has to lyrics is similarly freewheeling: from the anecdotal nature of Transport in Austere Locations – relating to “…working as a pot washer and being stressed…” – others like Crab are more surrealist – a crooning tide of soothing vocals, all about “…being a crab under the sea with claws to pinch and pry bits of old whale off whale bones…”

Shower Beer came to Sonny after “…the artist calkearns put on his instagram story a poem about the shower beer so I asked him if I could use it for my band […] he said yes, this is the first verse of shower beer pretty much and the rest is just made up.” Following it’s ethereal, gripping emotional peak with the stirringly sung “…and the boy may never shed a tear/for all he needs is more shower beer”, an enrapturing malaise of thrashing guitars, bass and drums, and spiralling trumpet swallow the ears in fervent glee. Such a potentially unsuccessful combination, but in actuality an unparalleled brew of enigmatic expression and diverse – itself a blend of classically trained and self-taught musicians – and stirring musical surroundings, is what bleeds into the band’s overall persona.

The singular nature £2 emit may also derive from their far-flung differences in musical training. Whereas Sonny was taught by Rob, and “…taught chords and stuff by my mates…”, the others boast “different levels of classical training…”– seth can even just tell what note it is by listening and Christie is a national orchestra level trumpet guy we are very lucky to have all of these very skilled musicians”. This, Sonny explains, “makes song writing very easy” – it also feels like the fractious spark that helped to ignite the sonic, heavenly miasma that is £2.

“Our live sound is different from our album sound but I think that’s the whole point because it means […] you just get a different thing to what you’ve already heard…”, Sonny says. Alongside this, another facet which makes £2 so antithetical to most is their live habits – “sometimes we like to throw in silly little bits and jokes, Charlie comes and reads us a story or tells us something new, sometimes we bring in some audience participation!” – lightyears from the soul-sucking mundanity swathes of bands echo.

As for future material, £2 have been “…ferreted away…”, “…doing some bits and bobs…”. Although unsure whether they’ll manifest into songs, Sonny retains his optimistic attitude: “…sometimes you’ve just got to hang out and wait the time away which is alright, some people like to be productive I just like to take it easy…”. One such musical amoeba may be a briny continuation of Crab. “I’m writing another one about sea creatures now, it’s about the brine lakes at the bottom of the sea…”

Just as some may emerge renewed and reinvigorated when “normality” returns, this incomparable group are also likely to further evolved, just as they have previously: “…if you imagine it like this, before we were just a buncha guys working hard at the tarmac plant and now we are the biggest rock stars you’ve ever even seen?”