Japanese garage band The Minnesota Voodoo Men have been wowing those in the know in and around Tokyo for a few years now; up to now they have released two full length albums ‘I Keep Shaking My Head’ and ‘Beat Explosion’ plus an EP ‘Too Much Texas Driver’ – whilst they have sold out in Japan very few copies reached European shores.

Thankfully that has just changed; Germany’s Soundflat Records have put out an eponymous titled album which allows us the opportunity to get to grips with their frantic garage infused surf punk which has been built from a classic rhythm’n’blues base – think early Stones and The Yarbirds then fed a diet of Nuggets, The Sonics, and add a dash of Link Wray…

We need these boys to play live in Europe – their live shows are legendary, on stage acrobatics that leave audiences speechless. 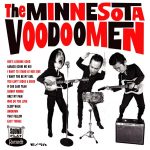 The Voodoo Men have played across Japan with The 5, 6, 7, 8’s, they have made a few festival appearences in Europe, and a handful of UK dates in late 2010

They can barely speak a word of English, and we doubt they know know where Minnesota is!!