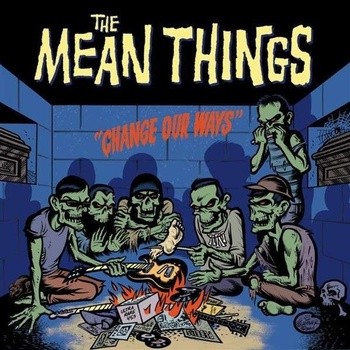 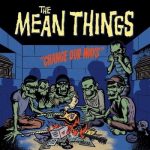 The Mean Things hail from La Rochelle on the French Atlantic, an area famed for its rugged coast line ”â€œ one section is called the ”ËœCote Sauvage’ which translates as Savage Coast; entirely apt for The Mean Things who create one of the most savage wigged out psychedelic garage sounds I have heard for a very long time.

The six piece formed in 2004 (Halloween to be precise ”â€œ no surprises there then) from the ashes of The Radishuns who played Link Wray and Bo Diddley covers, however the aim of The Mean Things was to delve deeper into the dark recesses, to unearth some real out there sonic mayhem.

Back in September 2011 they released their second album ”ËœChange Our Ways’ (Soundflat Records), the follow up to their ”ËœOut Come The Freaks’ debut ”â€œ ”ËœChange Our Ways’ further showcases their deranged fuzz guitars coupled to a solid pounding beat, which is then warmed with some seriously out there Farfisa organ, an abused harmonica fights to be heard; the lyrics delivering all sorts of ghoulish macabre humour are all hollered (thankfully)in English.

According to the band “Playing garage music, as everyone knows, is the best way to meet pretty young gals, the most delicious dish on earth”Â

Think The Chesterfield Kings, The Sonics and currently Liverpool’s own El Toro! ”â€œ The Mean Things have a don’t-give-a-fuck attitude, its what drives this band; they draw inspiration from past with covers of The Moving Sidewalks ”Ëœ99th Floor’ and The Wailers ”ËœHang Up’ ”â€œ However this isn’t rediscovering the past , its fresh, its vital and its very loud”Â¦ Plenty of their own material is included, the stunning ”ËœDo Know You’ will leave you reeling such is the ferocity ripping from your speakers; The Mean Things play with a demented conviction often on the verge of collapse, the lyrics coming so fast they just abandon them and revert to monkey whooping and wailing!!