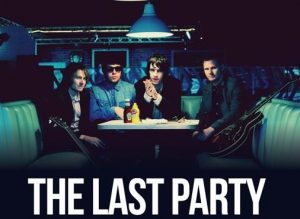 ‘Bonnie and Clyde’ is the new single from one of Manchester’s brightest new groups; The Last Party

Front man Liam Manton talks LTW through the groups rapid rise in just over a year, and about their first single release.

LTW: Bonnie and Clyde, what a great single, just a great piece of guitar pop isn’t it, you happy with the bands first release then Liam

Liam Manton: I think our first single has surpassed any expectations we had as a band really. We were talking about it before the single launch last week, and it’s becoming a bit of a monster in terms of what it’s doing for us. Soccer AM featured it and gave the song 5*, a few other sporting broadcasters and TV shows have done the same, and everybody seems to love the tune. We were in South (nightclub) for the official after party for the single launch, and Clint stuck it on in there and introduced it ”â€œ and the place went mental”Â¦. I’ve never seen a dance floor bounce like that before, and I’ve watched a few documentaries on the old studio 54 days!!
I think we made the right decision in turning down one or two independent labels, to put the song out ourselves ”â€œ it’s smashing it!

LTW: Great Video as well, ‘Shameless’ Ciaran Griffiths doing what he does best, was it fun putting together?

LM: Ha-ha well.. The shoot was over two days (Sat/Sun) in Manchester. It was the first time any of us had done anything like this so to say we were excited is an understatement. We’re on set on day one… and it’s was pretty apparent that we weren’t going to be doing much on the first day, so”Â¦ we drank. And then we carried on drinking. The final scenes being shot on day one were in a nightclub, and we finished filming probably 10 minutes before it opened… so we decided to stay in there and pull some moves”Â¦ 5:30 am and we’re due on set in 3 hours”Â¦ lets just say day two was very hard work, and the memories are very vague! ”â€œ The director worked us hard”Â¦ but we enjoyed it!

I’ll always remember Ciarran walking down King Street with his hood up and hammer in hand”Â¦ I bet a few security guards rear ends were twitching that Saturday afternoon! But yeah, overall, a great experience, a great team effort and I think you can tell how much fun we had in the video!!

LTW: You’ve got a great sound, like the single sounds like it’s been written by a band that have a full record collection than just trying to sound like the Small Faces or who ever…

LM: You’re too kind! Well, we never really set out to emulate anyone or anything, you know? If anything I’d say our sound is one of ambition, I mean, yeah there are definitive reference points, and some of our record collections may spill into our sound, but we were sat in my bedroom writing the first batch of songs, experimenting with orchestra sounds before we even had a full band for fucks sake ha-ha!!! ”â€œ we just wanted to write classic pop songs, with a huge sound, and I think that’s what we’re doing.

I guess you could say we just waited until our craft was honed, before we went out and played live, and I think that’s one of the factors in why we’re doing so well, because we came out when we were ready ”â€œ people were surprised at the strength of the songs ”â€œ a lot of bands make the mistake of doing one or two rehearsals and then gigging instantly, we’ve all been there, and as tempting as it was, we knew how to resist the naivety and the urge to get out there until we were ready.

LTW: Your on tour right now aren’t you with your London gig coming up, hows it going?

LM: Well we started the tour with our single launch in Manchester ”â€œ which will go down in history. There was a real electric atmosphere all night, the place was the busiest night n day has ever been and we could have sold the venue out 4 times over, so it was a great night. That put a spring in our steps; we went down to London and again, another blinder! Will Young came down to see us; I don’t think he quite grasped the anti-talent show jibes in our video! Ha-ha, he did buy the single though ”â€œ so we’ll let him off!

LTW: ‘We could be Lovers’ is one of a few stand out tunes, what’s the big songs at your gigs right now

LM: To be honest, I don’t think there’s a weak song in our set, and we’re not afraid to drop songs if we think we have better options ”â€œ I don’t think we’ve played we could be lovers once this year, which is testament to how strong some of our other songs are, which haven’t yet been recorded.
A Thousand Smiles always closes the set in epic proportions. Everyone seems to love that tune and it always creates a real hands in the air, sing along moment. Personally, we’ve got a song called ”ËœDance Through The Fire’ which we’re probably saying will be our 2ndsingle ”â€œ someone came up to us in London and said it’s the ultimate pop song ”â€œ he then spilt beer on my shoes, but, we’ll take his word for it!. Everyone has their own favourites for whatever reasons I guess. Bonnie and Clyde has been a real pleasure to play, and hopefully, a pleasure to watch/see/hear!

LTW: It’s all happened so fast for the group hasn’t it…first gig in November to supporting The Charlatans to a host of great reviews as well as Johnny Marr commenting on The Last Party being ‘the brightest light in new music’, things are moving quick aren’t they

LM: Yeah it’s been a bit of a roller coaster, and one we’re enjoying riding! I think getting asked to support bands, and getting endorsed by people who have been there and done it is great, but the best confidence boost you can get is when you put on your own headline shows, like we did last week, and they sell out, and break records in terms of people trying to get in, and people being turned away. Our single launch was unreal, everyone in there seemed to know the words to the tunes too, even the ones we ain’t got recorded, which to this day is still baffling to me!

LTW: In fact Manchester has woken up a little to new bands, as a regular face around the city and the music scene have you seen more attention to bands like yourself, Frazer King and others, do you notice a ‘pick-up’ in new bands being listened too and given a chance now in Manchester?

LM: I think there has always been some great bands in Manchester, some real varied talent, you know, from acoustic acts to the more abstract stuff, it has always been there, I just think more people in Manchester now are going to gigs, and there definitely does seem to be groups of people who are passionate about the music scene.
The one thing that annoys me is how petty it can be sometimes, bands are afraid to say other bands are any good, I don’t think its intentional hate or anything like that, I just think there’s a subconscious or an attitude within a lot of bands where they’re afraid to talk about other bands or afraid to say anybodies any good because they think it may hamper their cause, fuck that, we’ve never been about that, we want to bring everybody together, from whatever social group you’re in and just have a good time.

Take for example our video, Bonnie & Clyde ”â€œ we purposely brought in established actors, we gave the female lead to an up and coming drama student, we roped in DJ’s, Photographers, local bands for cameos, we even emailed all the local performing arts colleges and gave students the opportunities to be extras, alongside some well established names ”â€œ we want nothing more than a big group of bands to get together, play together and have a good time together, it’s all well and good having little pockets of success secluded within social groups across the city, think what could be achieved if we all got together ”â€œ there’s no limit! Look at the success of our single, rubbing shoulders with the likes of bSKYb, talksport, ESPN, we’re achieving what major record labels sometimes can’t achieve, with massive budgets, all this is down to hard work, and just sticking together ”â€œ people power!

We tried to do that with our single launch too”Â¦ the opening band had never gigged in Manchester before, we gave them a leg up and let them play to a sell out venue ”â€œ no bigger bands in Manchester did anything to help us when we started, so we want to make sure we change that and support the scene! 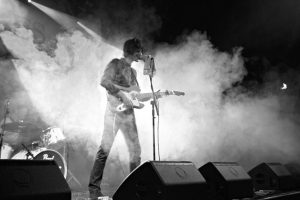 LTW: Got to say you have a great look and really it’s right you should be fronting a band but can it sometimes be a hindrance being called Liam and having ‘the look’ and coming from Manchester, you know, preconceived ideas of what people expect maybe?

LM: I’ve never thought about it like that ”â€œ if people are narrow minded enough to draw musical conclusions based on a band members name, a hair cut or a shirt choice, then to be honest, that’s their problem isn’t it? With this band, the music has done the talking ”â€œ the songs and the live shows speak for themselves, and I think any ill-founded reservations people have had, or may have in the future will be put to bed by the quality of our music. Either way, doesn’t bother me in the slightest.

LTW: Its all coming together for The Last Party and the distance the band have come in such a short time pays testament to that, so what’s next for the band Liam, what plans do you have for the rest of 2012?

LM: 2012 has been brilliant, we’re only a quarter of a way in and we’ve already achieved more than we expected to. We’ve got the single out, it’s getting great TV/Press coverage, we’re getting some high profile support slots, we’re filling venues ”â€œ I guess we’re gonna continue to ride the wave! We’re speaking to a few management companies, labels & booking agents, so in time, we’ll put in a team around us who we think is right for the job, but as for the immediate future we’re just gonna keep at it, and keep the good ship sailing man! Going to announce some headline shows in June/July ”â€œ including a huge summer party in Manchester, so keep your eyes peeled! And see you down the front x