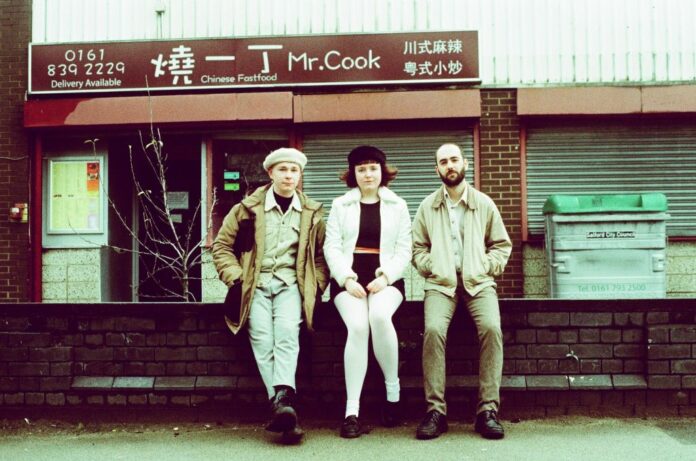 Metamorphic post-punk trio The Early Mornings formed in 2018 and, after a slew of scintillating tracks – whose exquisite simplicity encapsulated their symbiosis of saccharine-tinted but abrasive instrumentation and surrealist poetics – recently released their debut EP.

Vocalist/guitarist Annie Leader first met bassist Danny Shannon in 2014 – “…when I found out he played bass I knew we were going to play music together”, she says. Following years playing and searching, they found the “perfect one” in drummer Rhys Davies. “Rhys replied to an ad we put out saying he loved our influences and after a jam we knew he was the right drummer for us.”

Originally formed in Manchester – which greatly informed the poetic hues of their material (musically, lyrically, and visually), especially their single Blank Skies, with the video colliding the city’s gritty greys amongst the band’s aural exuberance – The Early Mornings now reside in London, after moving there earlier this year, not wishing to “…stagnate and stay somewhere we were comfortable… the music industry basically is London, so it was an easy choice where to go.”

The band themselves bonded over musical cornerstones “The Breeders, Meat Puppets, The Raincoats, The Velvet Underground…”, and “…Cate le Bon…”. Despite these myriad influences, The Early Mornings never once flounder in dredging up post-punk fatigue; their sound is wholly theirs – encompassing melodic pop and fervid post-punk – brashly refined through a Northern, ebulliently diverse lens.

With a unique guitar sound, also somewhat similar to the art-pop spikiness of Leeds’ Mush, The Early Mornings share an attribute with only the greatest bands branded ‘post-punk’: wielding their influences in a way which makes them decipherable only as embellishments in The Early Mornings’ eclectic palette. Why is this? Perhaps the reason lies in the primal, yet immediate and striking methods Annie applies to the guitar.

“Sometimes I write the guitar parts as a secondary instrument to the bass. I see the bass and drums as the spine of a song and the guitar is the sprinkle of detail on top.” In addition to seeking “more dynamic power by changing between picking strings and then to chords”, the simplicity of Annie’s setup also prompts this musical vernacular. Using very few pedals, it is purely Annie’s flavourful guitar character brightening the tracks to staggering effect.

Lyrics are formed from Danny’s poetry, with Leader selecting from his notebooks “…lines that fit the vocal melody. The lines would be taken out of context of their original poems but when put together seemed to make sense and have a new meaning.”

An example of Danny’s shreds of surrealism lies in the band’s debut EP, Unnecessary Creation, the title an excerpt of a poem of his: “Punctuate my days with unnecessary creation”, reflecting on art’s paradox – while they are far from essential, all artforms also serve valid as our very oxygen.

As well as writing, bassist Danny also occupies “…most of the bookshelf, with a large section on philosophy and psychology…”; drummer Rhys “…is into skating…”; and Leader’s art degree nourished her interests in “…paint and collage…”.

Though they absorb lyrical influences from “…Lou Reed, Bob Dylan, The Last Poets, Nirvana, Close Lobsters, The Fall…”, the three are even more indelibly connected to beat poet Bob Kaufman: “His surrealistic yet deeply moving style really resonates with us.”

Despite an inventive, focused song-writing informing their elixir even in the band’s nascency, the fluid writing process now also culminates in lengthier, zigzagging post-punk blazes. Where early tracks are around 90 seconds, more recent offerings like the blistering Days Spent careen to “…the 4-minute mark…” – which “…until recently was unheard of…”. Reflecting on the sharp juxtaposition of the “…short snappy songs…” and the much longer ones, the band enjoy both kinds with equal zest: “…we want a balance between the two.”

The EP is an exceptional tour through the band’s palette and this juxtaposition, from the succinct jouissance of instrumental Legal Length; the jubilant, swampy, rollicking rhythms perpetuated by Departure from Habit – guitar swinging flexuously from stinging lead to infectious rhythm; to the quicksilver of Not Content – abrasive rhythm guitar and undulating bass accentuating the yearning poetry. Herein, The Early Mornings’ growth occupies ample space alongside their established qualities; rising to the fore with dazzling diversity.