Growing up 60 years after the birth of rock’n’roll, raised on the unadulterated, raw energy of 50s rock’n’roll, the euphoric pop hooks of 60s rhythm and blues, and the emotive range and power of 70s classic rock, The Blinding Lights believe in the power of mainstream rock music; its ability to impassion, to excite, to anger and fundamentally, to make you feel. The Blinding Lights combine these influences alongside their belief in the power of live music to define their unique, fun, modern, British Rock‘n’Pop sound.

The band is led by Callum Lury; lead singer, pianist, occasional guitarist and chief songwriter. He thinks he’s very important. Fortunately, keeping him in check is his older brother Jack on lead guitar. Providing the driving beat of the band is the youngest of the brothers, Theo on drums, who also provides backing vocals.

Completing the line-up on bass guitar is the newest member of the band, Will Lord, the only non-Lury band member, and currently the only musician to last more than two rehearsals with them!

Together they aim to deliver an exciting, high energy show with a modern rock and roll sound.

The band have a single launch party this Friday (19th Nov) in London at the O2 Academy Islington with support from Joseph Lawrence Music & Frank James. 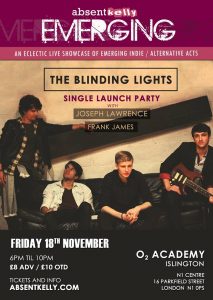