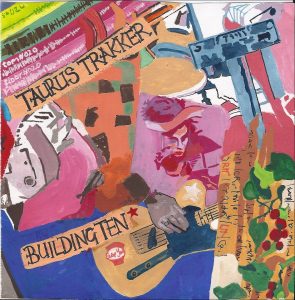 Meet west London punk-blues duo Taurus Trakker, their recently released new album ‘Building Ten’ is raw, honest and adhering absolutely to the ”Ëœwrite what you know’ principle as well as having the West London skyline looming over it and its roots literally buried beneath the Westway; because front-man Martin Muscatt is Mick Jones’s cousin but rather than just the family connection Martin couldn’t help but soak up and take on some of that same glory The Clash had about their music as he grew up closely with the band and their music.

The energy, realness and the ability to play head-on/exciting rock’n’roll comes from straight from the heart, both Martin (vocals, guitars) and Allison Phillips (drums) stride that line between classic late 70’s London and some thing that’s totally their own, something fresh.

Songs like ”ËœWest London Rock”Ëœn’Roll’ you can hear their celebration in both a personal history and the broader Portobello tradition which remains something of a hidden gem in London’s ”Ëœmusic capital’, ‘ 21 Miles ToÃ‚Â A Water Pump’ is another highlight, its almost jazzy fused intro settling into a mix of blues/punk topped off with a fantastic rhythm and chunky riffs makes it one of those songs you instantly take to.

But the tune ‘Building Ten’ itself is definitely a stand out on the album, its the sound of that generation from the capital that made rock’n’roll important again so not surprising to discover Mick Jones playing with Martin on this one, its total suss and no messing foot-to-the floor drive makes it probably the albums best tune.

In fact Mick’s known to make last minute appearances with Taurus Trakker on stage when he can make it as well as contributing in the studio and in the words of the man him self “Martin is all about some thing and that’s what I feel what’s really important these days, I love the band”.

April/May dates to be announced soon…