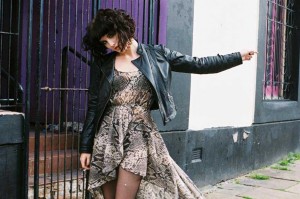 Ren Harvieu ”â€œ An interview with an exciting new singer-songwriter based in Manchester.

Manchester has always had a vibrant music scene. This heritage has grown and developed through different pathways along the years and now we couldn’t really say there is one particular scene. Now, in this rather new decade we have the new generation, one that isn’t afraid to talk about their influences candidly and without shame. Miss Ren Harvieu is one artist that the music scene cannot simply hide their excitement about.

Don’t let the name fool you, she’s very much Salford born and bred and completely northern in every sense. She sits next to me in some empty corridor backstage of The Ritz in Manchester, sipping on a can of Red Stripe, very much the antithesis of her music and demeanour onstage. “I’ve got like a headline tour in April, just all over the shop”Â she tells me in her broad Manchester accent. On the subject of her live performances, she’s only very early into her performing career with very few live shows under her belt. “I had a great time tonight, but I couldn’t hear one note I was singing. It’s a constant battle when you’re trying to perform but you can’t hear anything.”Â As many will know who are familiar with her music, she takes influence from the classic 60s pop stars and her voice will leave you with chills and a performance to undoubtedly remember. It’s a shame for Harvieu that she sometimes has to play without being able to hear that sound, as it is a privilege to hear indeed. “If the sound is amazing though, and you’re onstage, it’s like you’re on cocaine or something. You just cannot match that feeling with anything at all. It’s so addictive.”Â

The beauty of Ren Harvieu’s performance is her appealing stage performance, as she plays with the audience, winking and staring out, looking like such a natural onstage almost as if she was trained from youth. “I feel so comfortable. It’s so strange because in every day life I feel so shy and so uncomfortable but when I’m onstage I just get this fucking other person. I don’t know where it comes from, and I like her better than I like me now.”Â The facts are that she didn’t even sing a note until the age of 12, and grew up with quite the opposite of a stage school upbringing, yet she still manages to present to her audience a very theatrical set “I like playing with the audience, especially when they don’t like me. I’ve had a lot of gigs where they don’t like me. They want to see men strumming guitars. They don’t want to see some chick coming on with a crutch.”Â Earlier this year Ren broke her back in a late night accident and feared it may not be possible for her to walk or even sing again. Now she’s in good health, albeit with a single crutch to help her along.

“I’ve not been a live performer for very long, I’ve only actually done about 15 gigs ever,”Â she admits, which is honestly a true statement for her worth as a musician. To make such an impact already without being well into the gigging circuit is a bold success at this early stage “I really enjoy it. It’s such an outlet. You hold so much in you in everyday life, all those feelings that you don’t tell anyone about. You can just let it out. It is so therapeutic.”Â

Over the past year she’s received support from some of the most iconic names in the industry today, Johnny Marr being one of them, who rang her up with support during her time in hospital. She’s even developed a working relationship with James Allan from Glasvegas. Out of their meeting came the stunning and rather David Lynch-esque video and cover of the Roy Orbison track, Crying, which particularly highlights her vulnerability and talent. Any test for a vocalist is a Roy Orbison track, and it is truly overwhelming. “Basically I went over to Glasgow and went to James’ flat. We both talked about how we liked David Lynch. We wanted to write a song together. He suggested we should do a cover first just to break the ice. I thought if he likes David Lynch then he’ll like Roy Orbison, so I asked him if he knew ”ËœCrying’ and he just spun round on his chair with his guitar and started playing it. James is pretty intense. I just started singing it and we recorded it there and then.”Â The end product is genuinely so striking and beautiful, but also obscure with James holding onto Ren’s hand almost like a ghostly figure to her left. “People were saying ”ËœWhy were you holding hands?’ but the reason we were holding hands was because I was so unbelievably nervous. I was terrified. It just made me feel so much calmer. It was really nice of him to do that. We only did it in one take. There were people saying it was so mistuned but it wasn’t about that. I was in a very weird place and I was just singing. It’s not supposed to be a Leona Lewis thing. It doesn’t matter if it’s a bit out of tune, I was singing from the heart”Â

Even now there is talk of them working together in the near future, as Harvieu seems to have some very creative ideas running through her head, “We wanted to form a supergroup. James wants to do a bit of a side project. I’d like Rufus Wainwright to be in it. I was out with Dave McCabe from The Zutons the other night and he’s a bit of a character. I think he should be in it. I’d love to do a harmony group where no one has to be a good singer to be in it.”Â

Another thing worth admiring about this young singer-songwriter is her honesty in expressing her inspirations and influences. She feels no pressure to fit into what is expected of her, to adore the artists everyone else does. Quite frankly, she loves Disney music, for all the right reasons, “As a kid, I didn’t really have many friends where I lived so my solace was my videos. As much as people say it’s cheesy, if you actually listen to the music in those Disney films, they are so unbelievably intricate and beautiful, the voices and the orchestra are just unbelievable. There’s a scene in Cinderella where she’s scrubbing the floor and I remember it changed my life, and all these bubbles came around her but they’re all harmonising. I remember being a kid and going ”ËœThat is probably one of the most beautiful things I’ve ever heard’. It used to make me cry. It was so beautiful.”Â It’s amazing that a child, who did not really have that passion to share with her friends, still carried on with that passion and has developed into what she is today, showing dedication and true belief in what she has adored since being small.

“I’ve recorded an album, but I don’t feel that I’ve even scratched the surface. I’ve only been alive for 21 years but I’ve had a very colourful life. It’s not been normal. My life has not been normal, so there are a lot of things that I’m afraid to touch on. If this album goes okay and I get the money to record a second album then it’s going to be a bit weird”Â At this point I laugh and ask how weird it may be, quite light-heartedly, and she replies “Oh, it’s going to be weird”Â with complete sincerity.

It’s quite hard to imagine this artist’s life and what she must have gone through, but the fact she has the right idea to incorporate this into her music and art is something that is very impressive and positive at this early stage.
I expect Ren Harvieu to be an artist continuing down her road to success, but she’ll do what she wants to do. She’s independent and not afraid of using her influences and incorporating those styles into her material. Will we get the Ren Harvieu/James Allan supergroup? Or will we get some deep, dark and “weird”Â second album. At the moment there’s no need to get carried away.

Her debut album is being released by Island Records on the 9th of April and it is most definitely eagerly awaited.