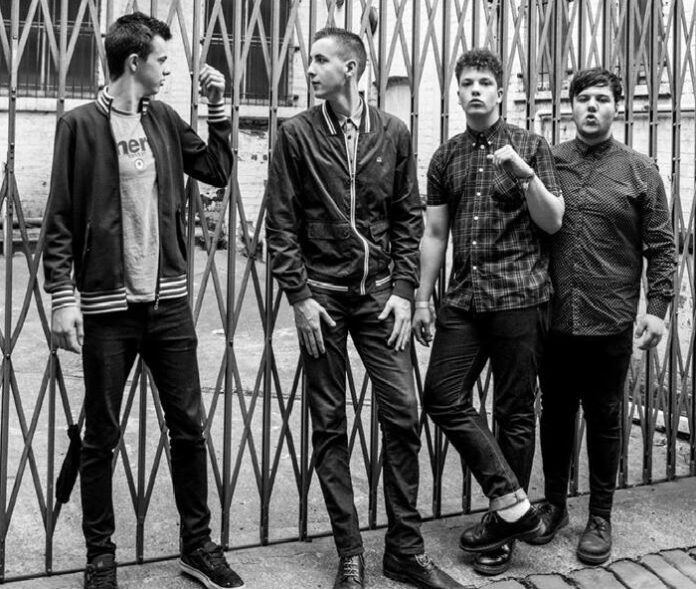 Jaunty pop-rock with more than a hint of funk, Manchester’s No Hot Ashes release their debut single ‘Goose’.

The first thing that’s clear about young Manc upstarts No Hot Ashes, is their sound, and potentially their influences, belie their relatively young years, their fusion of funk and filth, sleaze and soul making for music that’s defies you not to dance. Indeed their debut single, a double A-side entitled ‘Goose’ / ‘Skank’ epitomises the band’s penchant for a groove wonderfully; the re-recorded, and if I’m not mistaken, slightly reworked, tracks offer a small insight in what it is exactly No Hot Ashes are capable of.

Both uphold a distinct funk vibe, though neither stray too far away from the realms of indie-disco either, the hook from ‘Goose’ could quite easily find itself a floor-filler; the rolling bass-line and expertly executed palm mutes demonstrating an understanding and musicality light years ahead of the band’s contemporaries. Whilst ‘Skank’ is a far more frenetic track, singer Isaac’s razor-sharp delivery compliments the staccato guitar perfectly.

Young they might be, but you can’t help but feel that No Hot Ashes are a band with both the passion and the talent to go places. Whilst their certainly not afraid of straying from the beaten bath in terms of style and influence, there’s certainly enough of the familiar here for the band to harbour a commercialness which will undoubtedly work in their favour when it comes to them reaching a bigger platform.

Louder Than War: Hi guys, how’s it going? First of all, who are you, and how did you get together?

We`re No Hot Ashes from Manchester.

We first got together around June 2012 whilst we were all going through high school and here we are today. Our old Bassist Ryan left due to other commitments in 2013 but shortly after we met Jack who literally learnt our whole set in 1 practice session which blew us away so we asked him to join us.

Your music’s a blend of funk, blues and indie, and it’s quite unusual to see a group of reasonably young lads such as yourselves upholding such an aesthetic. Was it conscious decision to sound like you do? Or was it a case of getting together for a jam and this is what it sounded like?

Yeah, over the last 6 months we have really started to get into our own “sound” and been dubbed a fuse of funk and indie which we quite like to describe our music. We wouldn’t say there is much blues influence in our music though.

We do get that a lot, I guess we surprise many people once we’ve come off stage and their like “wow, your only…..you guys are tight” it’s always nice to hear. To be quite honest it’s a mixture of both, we all have very different yet also very similar musical tastes and No Hot Ashes is literally a blend of that but pretty much all of our songs are formed by literally jamming, you can tell when a song has been “manufactured” it just sounds too clean and repetitive., We kind of fell into the funk thing its always been our main aim to make people dance at gigs, even if it’s just 1 person. We love it…it’s pretty f**king sad that so many people go to watch bands and just stand there as if nobody is even on stage but we’ve learnt not to let that bother us, there`s nothing worse than watching a band on stage who look like they don’t want to be there.

You’ve just released your debut single, in the form of ‘Goose’ / ‘Skank’, Can you tell us a bit about the tracks? Is there a story behind them?

“Goose” was always going to be the A Side it just has that much more depth to it but “Skank” came along and we knew straight away it would be the perfect B-side they just fit together perfectly.

“Goose” started completely with Isaac to be honest. He brought the chords to practice we jammed around it for a few hours after a few more practice sessions we had a certain structure to it. We all think it’s the best song we`ve written to date and since the first time we gigged it people haven’t stopped dancing to it. Proper get them going live. We took it into the studio in September with Gavin and he saw potential in it and he helped us put the finishing touches to the song. He gave his opinions and suggested a few changes adding small parts to the song which seemed to just “make” the song. It’s a monster now.

“Skank” came about really only a few months ago and we`d probably only gigged it a few times before we came to recording it. It started out with a pretty funky chord sequence from Lui and we jammed with it for a few hours in the practice room and it just developed into this really catchy tune and one of our favourite songs to play live. Again when we took into the studio the song transformed into something else. It’s a different route to our usual songs but we get really good feedback at gigs from it.

They were produced by Gavin Monaghan who’s worked with everyone from JAWS to Robert Plant. What was that like? Did he bring anything new to the table for you to think about?

Yeah man, the guy is a genius…..he`s worked with so many successful bands like Editors and The Twang, Jaws, Superfood…the list goes on and we were pretty made up when he messaged us out of nowhere to go and record with him. We couldn’t say no. We got both songs done over a 2 day period over in Wolverhampton and it was great, the whole vibe of his Magic Garden Studio is just so chilled it was like recording in your living room. We learnt a lot from him and he pushed us up a few levels with the songs producing two tracks for us that we couldn’t find a fault with. He was always there looking to make the songs perfect and didn’t hesitate to jump in and get us to change something which just fine tuned the songs to perfection.

With your debut release now out, what can we expect looking ahead at your next one? EP or another single release?

We’ve not really given it much thought yet, “Goose” is getting a load of attention at the moment and we are going to ride this out for a while and make the most of it. There are a few songs we`re gigging with which haven’t been recorded yet but they`ll definitely get done in the future. Obviously as an unsigned band it’s all self-funded…the recording, the cd printing, the t-shirts, the transport, the stickers, the posters everything comes from us so as you can imagine pulling the funds together to get back into the studio is going to take a while but we enjoy the hard work that goes into getting there. We owe an awful lot to all the people who pledged to our Kickstarter fund earlier on this year which literally put us in the studio. We wouldn’t be where we are with the single launch without them. Some very generous people out there.

With a sound that’s as eclectic as yours, who are some of your biggest influences? Presumably not just the same acts we see listed by your generic indie bands?

As we spoke about before there’s a very wide spectrum of music we listen to….anything from 70/80s funk/soul, Red Hot Chili Peppers, Indie/Rock too many to name. As a band we all have an equal love for funk music so I guess that’s been the driving force along with the bands we have grown up listening to like Stone Roses, Arctic’s, Foals and loads more…we like to think it’s a good mix of new/old sounds.

2014 has been a pretty big year for you. What have been some of the highlights and what can we expect from you in 2015 and even beyond?

It really has, it’s probably been the making of us as 4 lads and we`ve loved every minute. We`d say the kraak gig we put on in September has to be the highlight. It was the first time we ever thought of putting our own gig on and it was awesome. With a few days to spare we sold out the Kraak Gallery in Manchester and played to a really good big crowd. We nailed the set and we were all on a really big high, took us a few days to come down off the buzz we got from it. Another big highlight was playing at Mr Peeps presents at the Deaf Institute, another top crowd with a lot of buzz surrounding it.

Hmmm….more gigs, more funk, new tunes and maybe even a little tour in 2015 who knows….

Finally any parting words or exclusive news you’d like to get out there?

Go and buy our Debut Single “GOOSE” on ITunes!

You can also buy limited edition merchandise in the form of CDs & T-shirts by emailing us at nohotashesband@hotmail.co.uk.

No Hot Ashes can be found on Facebook and they tweet as: @_NoHotAshes. Goose can be bought on Itunes here.