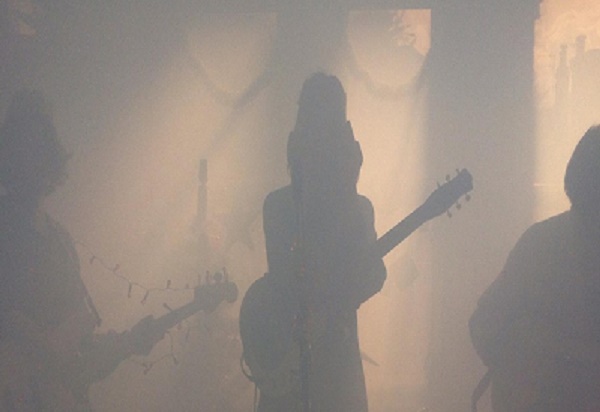 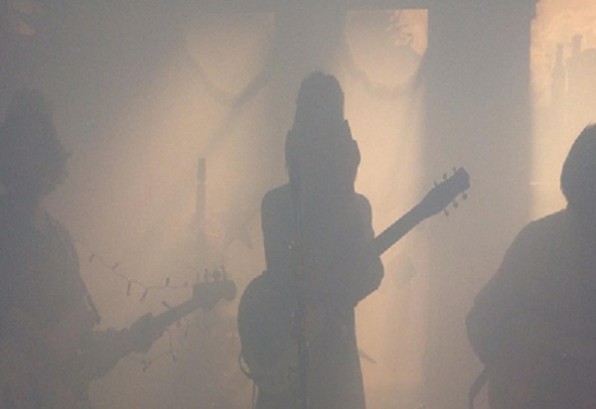 Brighton-based noisy post-punkers Morning Smoke catch up with Louder Than War’s Dave Beech, talking about their forthcoming single, washing up duties and a recent gig that got broken up by riot police

When Morning Smoke emerged from Brighton’s sea-mist a little under two years ago, they were two fresh faced teens with a penchant for noise and little apparent direction. That didn’t mean they were without potential however, and whilst their first release left plenty to be desired in terms of its production, it did manage to embed the band’s name in to the forefront of our mental jukebox and we’ve followed them ever since.

Addressing early complaints almost as soon as they materialised, Morning Smoke went from a two-piece to a four-piece, filling the cracks in a musical veneer that was competent, yet a little thin on the ground. With the band now completed however, the last 12 months have seen them go from strength to strength, earning universal favour with taste-makers across the board. And, with a double A-side coming in the not-so-distant future it seems their burgeoning reputation looks set to swell further. With an inherent darkness to Morning Smoke overall, it comes as little surprise that ‘Hunger’ / ‘Stephanie I’ are two tracks of raw post-punk aggression that encapsulate the band’s overall aesthetic perfectly.

‘Pre-goth’ is a word which has banded about the band in recent months, and whilst such pigeon-holing might well get the knickers of many a music journalist moist, it’s safer to make comparisons to the likes of Sonic Youth and Joy Division, than it is to tar Morning Smoke with the same brush as bands they don’t really sound like (a quick Google search tells me that bands associated with pre-goth include The Velvet Underground and The Cure, neither of which do Morning Smoke invoke).

With release of the ‘Hunger’ / ‘Stephanie I’ looming, we caught up with the band and asked them to shed a little light on themselves.

Louder Than War: Hi guys, thanks for taking the time to answer our questions. First of all, can you introduce yourselves and tell us how you got together?

Morning Smoke: Hiya thanks for talking to us! We are Milo (lead vocals/guitar) Max (lead guitar) Chris (bass) and Isaac (drums/vocals).

You started out as just a two-piece making demos on a computer, before progressing in to the full band you are now in early 2013. How was that transition? Did it take some getting used to or were drums and bass a welcome inclusion?

To be honest the transition from being very much a bedroom project to being a full band was very easy. Max and myself (Milo) always had the intention of Morning Smoke being a full band, it just took some time to find the right musicians to work with. The inclusion of Chris and Isaac made the band so much better in every way.

Your forthcoming double A-side ‘Hunger / Stephanie I’ is released next month, both are typically dark. Is there a story behind either of them?

Haha yeah all of our songs are very dark…Lyrically there isn’t a concrete story behind the songs, the lyrics are often very personal, I tend to write them as an almost stream of consciousness and don’t really like explaining what there about even with the band really!

Your sound has been described as being similar to Sonic Youth or Interpol, but who else has influenced you as a band?

Yeah the Sonic Youth comment seemed to appear one day and now we’re always getting compared. Bands that have influenced us are Beach Fossils, DIIV, Tame Impala, Mac Demarco, Slowdive and Dre Dre.

Also ‘pre-gothic’ is a word that’s being thrown around a lot to describe your music. How do you feel about that? Is it a term you want to be associated with?

I think there is nothing wrong with the term ‘Pre- Gothic’ although it’s not something we would describe ourselves as. To people most of the time we just say were noisy when they ask what [kind of] music we make.

Having two lead guitarists isn’t a set-up often seen within indie circles. Was this a conscious decision or something that happened naturally?

It wasn’t a conscious decision no, it just happened to be that a lot of the bands we like have two melody lines playing over each other, so naturally we gravitated to that. Also I’m not as good a lead guitarist as Max, but I like to chuck some bits in here and there!

Your songs sound fairly complex in terms of layers and structure, can you go through the typical song writing process for us?

We don’t have a specific process of creating tunes but often it will be myself (Milo) with chords and lyrics and then well go from there, structuring the layers and dynamics of the song together.

You all share a house together, and as a result get to practice more than other bands, but do you ever find that living in such close proximity to your band mates, things can come to blows more often?

Not really, I mean we don’t really argue about musical direction, if we do have a disagreement it will be over something trivial, the kind of arguments any house-mates have. For instance Isaac never does any washing up.

In the scheme of things, you’re all still quite young. Is music something you’d like to do full time or do you have any other plans for the future?

100 percent this is something we all want to make our jobs, it’s just a case of working hard enough for that to actually happen.

You recently played a house party in which the riot police turned up. Is this something that happens regularly at your gigs? Tell us about that.

As much as I’d love to tell you that riot vans are a regular occurrence, I’m afraid they’re sadly not. That was a really fun gig though, we even got to finish our set before the police kicked everyone out of the house.

With the double A-side dropping soon, can we expect an EP or even an album any time soon? Next year perhaps?

We recently recorded some new tracks which will be out sometime in the New Year, I don’t think we have any plans to do an album until we’re at a level where it would make sense to do one. If we got to the stage where there was demand for one then sure we’d love to but until that point I imagine we will continue to put out singles.

All your shows seem to be down south, with major label interest now, can we expect any excursions North?

We’d really love to gig up north, it’s mainly a question of money as it would cost a lot for us to play a up there. Although there is possibly something exciting in the pipeline for the New Year!

Finally, what can we expect from you going in to the New Year?

‘Hunger’ / ‘Stephanie I’ is released on December 1st. Morning Smoke can be found on Facebook and they tweet as: @_MorningSmoke.