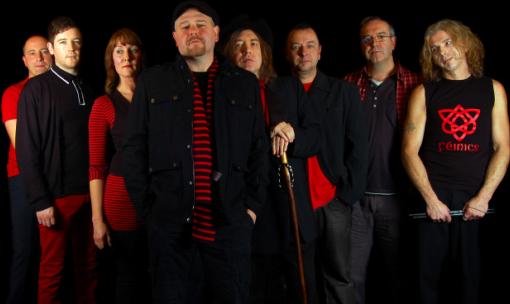 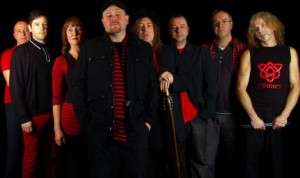 Many of you will be aware of the current and ongoing Celtic Connections Festival 2012, a two week celebration of Celtic inspired music hosted at a selection of venues across Glasgow ”â€œ However a cursory glance at the list of performers suggests that the organisers are somewhat adverse to bands with a little bit of an edge; as such we will introduce to you”Â¦ Merry Hell.

The 8 piece outfit based across the North West of England were formed in early 2011 from the still warm ashes of legendary Wigan band The Tansads who successfully blended folk, punk and indie together ”â€œ Merry Hell have successfully transported themselves to the glories of their past, and deliver blistering folk/rock with a message for the future.

The band is built around a nucleus of the Kettle family; brothers John, Andrew and Bob have been joined by John’s wife Virginia who brings both acoustic guitar and a warm contrast to John’s typical gravel driven vocal delivery. Former Tansads Lee (Keyboards), Phil (Drummer) and Tim (Guitar) are joined by Andrew (Bass) ”â€œ there aim being to revolutionise the genre. They play hard, but all the while remember that it’s the melody that counts.

Musically they range from the anthemic to the intimate whilst combining lyrical playfulness with astute observation and comment; they offer your favourite songs that you haven’t yet heard. In a relatively short space of time they have forged a potent live reputation one that is both infectious and inspiring ”â€œ but then that is to be expected for a band with a pedigree such as theirs; however there is no resting on laurels ”â€œ Merry Hell are determined to bring something new to the genre, and frankly they succeed.

A band with a history, a pedigree and most importantly, a promise for the future.

With one album already under their belts ”ËœBLINK… and you miss it’ (LTW review to follow) released to critical praise from both the folk sector and the rock press ”â€œ Merry Hell with their high octane live performances, are set to excite audiences across the UK and Europe throughout 2012.

Catch them live at;