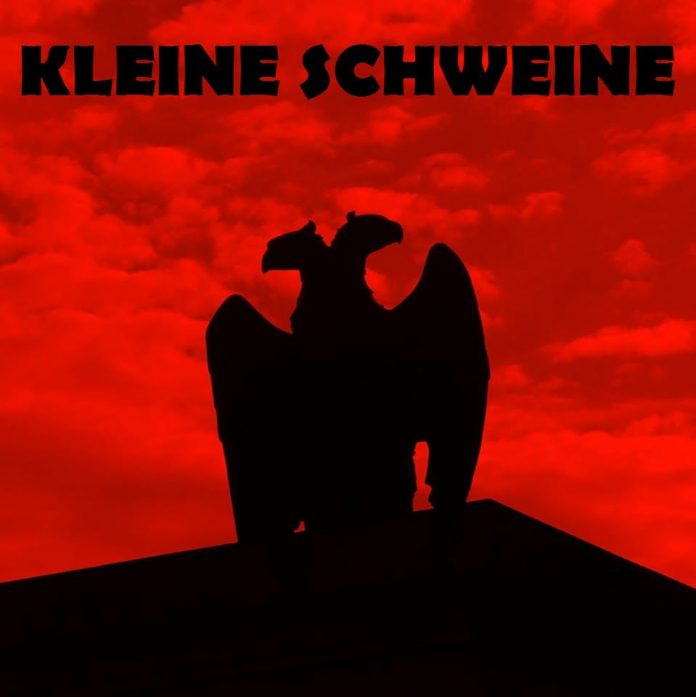 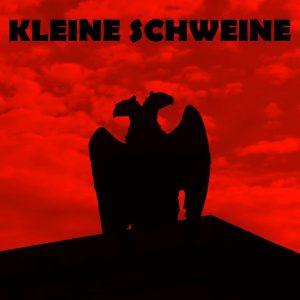 “Architect of countless horrific initiatives / Have that you cunt” – “Ceaucescu Let The Dogs Out“, Kleine Schweine.

Remember when music used to be about something? New Leeds band Kleine Schweine do.

Arriving towards the end of last year as a free download single (here), “Ceaucescu Let The Dogs Out” and its double A side “Breakfast In Albania” were a breath of fresh air; not only for their interesting subject matter but for the fact that the two tracks between them weighed in at about three minutes, three minutes of glorious post-Dead Kennedys dirty angry punk rock. Brilliant, intelligent and ridiculous in roughly equal measure, this is a band seemingly intent on putting both fun and education back at the top of the agenda of a music scene that often seems a little lacking in both. And they’ve got plenty more where those came from, too – a recent live set-list posted online contains intriguing titles such as “Pass The Dubcek On The Left Hand Side”, “Back In The DDR” and “Pride (In The Name Of Yugoslavia)”.

They’ve already had a bit of airplay from Tom Robinson on BBC 6 Music, and by all accounts their live gigs are excellent – Matt Sweeney at croon.co.uk reported thus on their live debut in December: “Their set starts like a football match in a rowdy and drunken stadium. Atmospheric as hell, a German flag was flying high above the stage as the national anthem (or at least it seemed to be the German national anthem) plays through the speakers and they take their positions…. Cheeky front man Neil Hanson is on superb form, baiting the crowd like a crazed jester with random body movements and quick fire vocals. He’s clearly relishing his return to the spotlight, as do the rest of the band as they compete for attention, thrashing their instruments as if willing them to break. Every song is about a minute and a half long, and each comes complete with at least two catchy chants. After a few more gigs they’ll no doubt have built up a crowd who’ll sing along with them.”

You might recognise the name Neil Hanson if you’ve been around gigs in Leeds in the past decade: he and at least one of his band mates were in raucous party punk band International Trust who released some glorious garage-punk-pop singles a couple of years back and won the renowned Leeds Futuresound contest (where new bands battle it out for a place on the Leeds Festival stage), and prior to that Neil was in local legends Les Flames! alongside guitarist Whiskas who went on to find some success with Ã‚Â¡Forward, Russia!. You can’t keep a good punk down, it seems.

So are they serious? Well, yes. Look beyond the jokey song titles and you might learn something. “Breakfast In Albania” for instance is about Edi Rama, mayor of Tirana and leader of the Socialist Party of Albania, who organised the painting of many of the city’s old buildings in ridiculous colour schemes because he felt like it, justifying his actions by stating “Being the mayor of Tirana is the highest form of conceptual art. It’s art in a pure state.” We asked Neil Hanson why he was so interested in the former Eastern Bloc.

Neil: “It’s a fascinating part of the world where a lot of mad stuff has gone on in very recent times. With the current crop of songs and our upcoming album we are giving respect to some brilliant people from the region, as well as berating some of the utter bastards who caused human misery on a massive scale. The song titles are purely for our entertainment.”

As LTW reported last week (LTW feature), globally, punk rock seems to be having a resurgence as rebel music right now whilst here in the UK it seems, on the surface at least and as far as the mainstream media are concerned to be more of a retro movement. Is punk still relevant here?

Neil: “A big question. I suppose a lot of people would still consider it retro over here because punk is always related with a Britain of the past, but I’m sure if you look in the right places there is an awful lot going on. A lot of people are angry and getting treated like shit by the people with power so bands will undoubtedly kick off against this. Most of the bigger bands in this country are very safe though and probably mates with that nice Mr Cameron so we’re not likely to hear Chris Martin and the like shouting about NHS cuts on the X Factor.”

Kleine Schweine’s Facebook page introduces them as “Noisy historical political punk band from Leeds. Like I LIKE TRAINS. On speed.” They might be (half) joking, but aside from actually writing songs about something other than love / getting high / being depressed / nothing much at all, they have something else in common with their post-rock-indie hometown mates – they’re making an album using the fan-funding PledgeMusic scheme. Often held up as the modern-day equivalent of the home-made cassettes and cheaply-pressed flexis of the post punk indie era, more and more bands are turning to this payment-upfront method of financing their music. On Kleine Schweine’s page you can pledge for a copy of the finished CD at Ã‚Â£10 (Ã‚Â£12 signed) along with a number of other treats ranging from a Kleine Schweine pig mask (Ã‚Â£10) to a photo of your favourite band member dressed as a dictator of your choice (Ã‚Â£10), your chance to sing “gang vocals” on one album track (Ã‚Â£25) to a full Kleine Schweine gig at your house (Ã‚Â£200) – or indeed a jar of commemorative sauerkraut (Ã‚Â£9). We can safely say this is the first time we have ever been invited to help further a band’s career via the purchase of fermented cabbage. And before you ask, yes I have put my money where my mouth is and pledged… although not for the sauerkraut.

Go and check them out in the flesh here:

And finally, in the spirit of DIY and bands supporting each other, we asked Neil who else we should be looking out for in Leeds right now. He told us “Leeds is an amazing place musically and you will never struggle to find a good gig any night of the week. Bands wise, Pulled Apart By Horses are the big dogs at the moment, and rightly so. Brew Records are putting out some amazing stuff by the likes of Blacklisters and Castrovalva. The Scaramanga Six (although technically from Huddersfield) continue to be a force to be reckoned with whilst your old punk fans should check out Cyanide Pills if they haven’t already.”