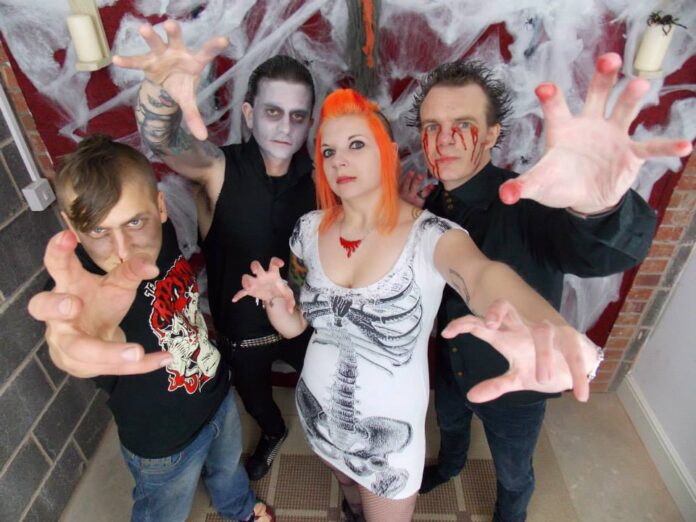 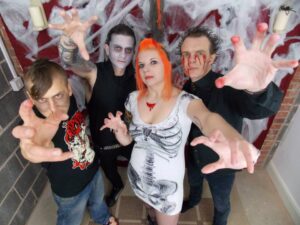 Headstone Horrors are a Nottingham based Horror Punk band (I guess the clue is in the name), a four piece based around the core of singer Natalie Thornton (formerly of Girlfixer) and guitarist/backing vocalist Jimi Faulkner. Faulkner is a veteran of the Oxford punk scene, having played in outfits including Submerse, Alley Rats and Daisy E And The Unsteadies. I remember seeing Submerse during my early noughties college days; having known Jimi for a short while during this period it was clear that he and the rest of the band had a far greater knowledge and understanding of the punk movement than many of the Sum 41 acolytes frequenting the circuit at the time, on stage they both looked and sounded like the real deal. This new outfit are proving the most successful yet, having recently made number one on Nottingham’s reverbnation punk chart and been added to the bill of the much coveted Rebellion punk festival in Blackpool. Read on at your own discretion…

Like The Morgue is the band’s second release since forming in late 2012 (following a two track CD sold at gigs), a gleefully ghoulish, gloriously lo-fi four track riot of a recording, crackling with the giddiness and enthusiasm which those who exist on a diet comprised of cheap speed, b-movies and pints of Snakebite Black will surely relate to. Tracks like The Bite instantly transport you into a horror film; a slow, menacing intro followed by a deliriously headbanging punk stomp conveying images of walking down a deserted lane on a dark night before being bitten by an unseen force. There’s a real kind of Nosferatu/Salem’s Lot vibe to this and Silent Moonlight, held together by a healthy sense of fun and abandonment. Thornton’s searingly harmonic lead vocals provide a perfect match to Faulkner’s guttural snarling, an unlikely concoction yet an undoubtedly potent one. The title track and Frankenstein’s Girl burn with the same three chord retro horror fanatic fury; a dizzying sonic evocation of Roger Corman’s Edgar Allan Poe adaptations, the camp melodramatics of Hammer, the defiantly DIY z-grade chic of Ed Wood and the unrepentant splatter of Herschell Gordon Lewis. Not bad for an EP clocking in at just under 12 mins ….

The band have been building up a formidable live reputation, all corpse make up, fake blood and infectious punk rock anthems. Proudly flying the moth eaten old flag of rebellion whilst soaking it in new blood to feed upon, Hellraiser style, Headstone Horrors are doomed to walk the earth and damned proud of it . Punk’s not dead, or is it? …………

Like The Morgue is out now on Headcheck Records. It can be purchased on CD here