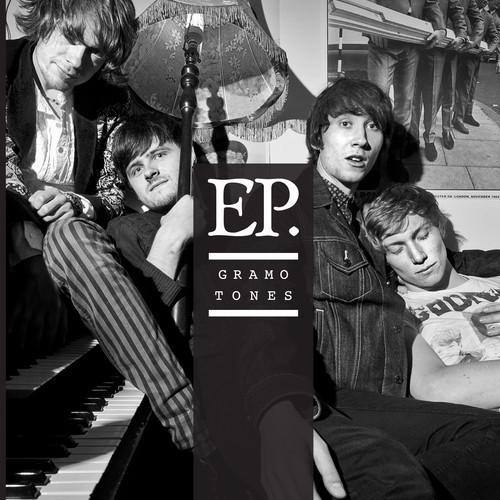 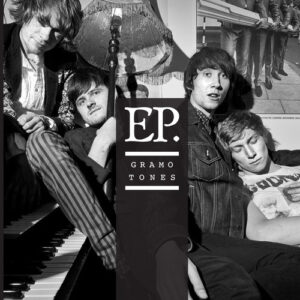 Gramotones have been building quite a buzz around Manchester for a couple of years now, fuelled by infrequent gigs and a love of harmonies that stands them out from the crowd of wannabes wanting to imitate their modfather heroes. The ironic result of this was an invitation from Paul Weller, who described Daltry Street as one of his favourite tracks of 2013, to record their debut EP at his Blackbarn Studios.

The result, including Daltry Street, is released this week, simply titled Gramotones EP. Weighing in under nine minutes, it’s a short sharp shock to the system. It doffs its cap to those heroes in passing, but marks them out as a band with a mission and delivers on the promises of those shows and the accolades that have already come their way. Like there being no one front man in the band, there’s no real lead track on the EP either with all three tracks matching the high standards their reputation has set them.

Louder Than War spoke to Jake and Sid about the band, their past and their future.

Louder Than War: You’re talking about the EP as your debut. Tell me a bit more about it

It’s been a long time since we released something, so we sort of consider it a fresh start. We’ve done one single with a b-side but we only made about 200 copies, but this is the first release that we’re promoting seriously.

Old Man has a bit of dark humour in it. I like that in songs, not make you cry laughter, but humorous, not too serious, even though the subject might be. You can see that more in the video.

A couple of years. Sid and I had been writing for a bit before that and Sid knew Ryan as well and they wrote together and then we got James the drummer involved. We always used to see each other in The Castle in Oldham.

You’ve had quite a few big names supporting you given you haven’t released much. How has that come about?

It’s strange really how it’s come about. Weller obviously and before that Steve Cradock, his drummer and Chris Difford from Squeeze. It’s good to get that support and also advice because they’ve seen the industry from the inside and can point us in the right direction.

Are those the sort of people that influence you?

We have such a wide range that we can’t really answer that as a band. The drummer’s into completely different stuff as is Ryan. We struggle to answer that question and I hope it comes across in the music that we don’t sound like a particular band.

The way you interchange vocalists and don’t have a traditional front man helps that.

We always wondered if that would be a problem. People have told us though that it’s a good thing. For us it also helps to keep it interesting and it doesn’t all sound the same like some bands do. We’ve both sang before and wrote before. Ryan’s started writing and he’s getting more involved too.

We want to sound different. There’s not much point sounding like you’re covering ground that’s been done before. It’d be easy for us to wear suits and hold our guitars a certain way, but that’s not us.

We really like the fact we don’t have a front man. We like to have a laugh on stage and not look too sullen or act too cool. You do music for fun, it gets you away from the normal, boring kind of lifestyle. We couldn’t be cool if we wanted to.

As you’ve been together a few years and you’ve not released too much yet, do you have a catalogue of songs and an album in the pipeline?

We don’t have an album as such, because where we are at the moment until we get a deal we wouldn’t consider one. EPs are easier and if you release an album, you put all your eggs in one basket and all your favourite tunes and if it doesn’t do anything and it’s self-funded it’s sort of gone.

We love albums but the younger generation have a more throwaway view of them, they can pick through to get their favourite tunes or buy a single and play them to death. Before you had to buy the album if you liked three or four songs and then you’d fall in love with the rest.

We’d love to do an album, on vinyl, so we can hold it and be proud of it. But it’s a tough one and why we decided on EPs. We have enough but we’ll drip feed release them so people will play the three tracks, want more, then we release more.

All words by David Brown.  His other work for Louder Than War can be found here.