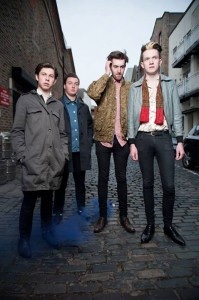 Gangs are from Dublin and play a powerful swaggering take on the classic lineage from the Jam through to Oasis with a slash of the Las, Specials and the Beatles- all the holy stuff. That kind of sharp cuts music- sharp cuts in your gear, hair and modish take on life.  The cool thing is they are teenagers who don’t give a fuck about the fashion is meant to be- they KNOW what the fashion is and their laddish romps have the tunes, the attitude and the sheer self belief to go all the way…

GANGS – Do Nothing (Live at The Village, Dublin) – YouTube

GANGS are a Rock n Roll four piece out of Dublin, made up of Jordan Curtis, Dan Smith, James Connolly, and Jonny Halpin. They came together as a band in 2012, backed by their collective appreciation for music and fashion. With a sound and style forged by friendship, talent and a dedication to their craft, the would-be rockers transported themselves to the top of the pile and are now regarded as one of Ireland’s hottest new musical prospects.To date, GANGS have blown away crowds both at home and overseas with a host of sold out shows. They have already had the pleasure of performing at Other Voices in both Dingle and Derry. They have opened for the likes of Palma Violets and headlined the prestigious ‘Ones to Watch’ festival in Dublin. They have graced the stage of London’s iconic Dublin Castle and are to return again in the summer due to popular demand.2014 is earmarked as a special year for the Dublin band. With a debut EP currently being produced by Reekus Records and their UK and Irish tour in full swing, there’s no saying what GANGS can’t achieve. They kick-started the Summer with a headline slot at Vantastival, Irelands first music festival and immediately followed this with a trip over to Brighton to play at The Great Escape.

GANGS draw inspiration from a wide range of musical icons, most notable of which being The Jam and The Blades. With captivating vocals, two classically trained guitarists and a hard-hitting drummer it’s easy to hear shades of everything from ‘60’s rock n roll’ right up to ‘80’s mod rock’ and beyond wrapped up in GANGS distinct style.

Fuelled by their fans, GANGS aim to make their music as accessible as possible. They will be launching their debut EP on July 31 with two shows at Dublin’s Academy 2, one of which will be especially for under 18’s. Everyone is welcome to ‘Join the GANG’ on their quest for worldwide musical domination.