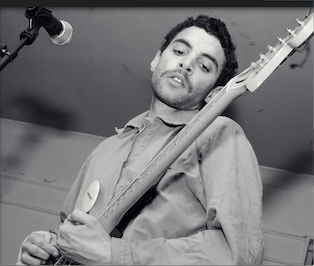 Duds are a six-piece D.I.Y collective who initially came crashing into my headspace back in 2016 with their first 7” release ‘Wet Reduction’ through Swedish/ Manchester based independent label, Maternal Voice. From the absolute outset, I was hooked into their inventive zany sound that offered an array of irregular timings, skewed busts of noise and abstract lyrics. I felt thrilled by the sporadic nature of the construction of their songs and aroused by the offering of such a wide scope of juxtapositions within their sonic arrangements, so instantaneously I was drawn to the excitement of catching this band in a live environment. Within the last year, Marc Riley from BBC 6 Radio Music has been championing behind Duds, helping to secure their signing with, Castle Face records as well as support from Colin Newman from the band, Wire who also totally digs their artistic, fresh angled sound.

It’s notable that Duds still own an air of mystery about them with only a relevant Facebook and Bandcamp social media page, they seem to be liberated from becoming chewed up in the hamster wheel of heavy online promotion and focus more on creating an impact through physical shows and gained experience from touring.  In many ways Duds project a “go dig for yourselves” situation for people to either embrace or ignore as well as placing a kind of “gem of a find” scenario for all those who are seeking an interesting band to listen to which in my view is a great tone to set with this relevantly new forward-thinking band.

Live, DUDS are something else – tight and concise to the point of precision, but not exactly note-perfect, in that it’s their thing to incorporate intentional ‘mistakes’, or noises that at least sound like they aren’t supposed to be there. They present a new angle on post-punk/ art-rock that oddly breaks them away from nostalgia and interestingly throws them distinctly into the future, they most certainly own a progressive feel and conjure a pheromone charged buzz about where their music is heading as they are very open to experimenting and having fun with their sound. In a uniform of khaki green shirts and trousers with noticeably large ‘Immediate’ badges attached to their shirts, the band set Mono’s stage alight with their presence as a full capacity crowd busted all kinds of contorted stop, start shapes in unison with the music. This is such a talented band who provide an inventive edge to their overall sound and attitude, they embrace mistakes and revel in the reality of what they craft sonically, they stand for rigidly complex, yet wildly loose, sporadic music with no frills attached. In regard to themselves, they are the first band I have taken notice that they truly stand as a conduit to the music they are channeling through them.
Duds are currently on tour in Europe but will be back in the UK this coming December 4th where they play Brighton at a venue called Pattern. I highly recommend you check them out! and follow their tour dates over on their social media page so you can catch them in a venue near you………